Check out this new crowdfunding video from the New Customs 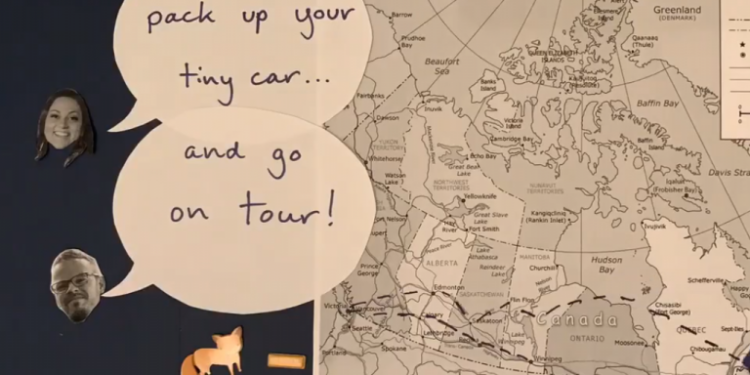 Since 2016, The New Customs (Emma Cloney and Dale Brown) have been carving out their own unique style of indie folk music. With two albums and over 200 shows played across every corner of Canada already, the duo has taken on its biggest challenge yet: funding its new record, Selling Religion on Government Street (due in the fall). In order to meet their goal, the band members need a little help and have started a crowdfunding campaign.

When The New Customs decided to launch a crowdfunding campaign, they found themselves in the position that so many others do these days: wondering, “How do we ask for support?” With crowdfunding replacing record labels for indie’s support these days, they knew they would have to throw themselves at the mercy of their fans, friends and family. So, in a burst of inspiration, Emma said, “What about stop motion animation? How hard can it be?”

So it was decided, and what resulted was three days of mayhem, a destroyed kitchen in which it looked like a tornado had careened through a construction paper Kansas, and a light-hearted and tongue-in-cheek approach to the realities of seeking a career in music. Over the course of 2000 individual photos, the two moved and crumpled tiny pieces of paper and saw their story unfold. Featuring “Never Tire of the Road,” a track off their upcoming album, the video speaks to a few of the challenges that musicians in the modern day face, all with a wry grin.

The Story behind the new album

The idea for Selling Religion on Government Street began in August 2017 while on tour in Victoria, British Columbia. It was a rare day off, and The New Customs took to wandering around downtown in all its summery vibrance. It quickly became apparent that there were many layers to the city; around all the flowery patios, buskers and ocean air, there were also tent cities and hobo jungles filled with travellers and transients, an invisible second population. They were there in plain sight, but the more refined demographic wouldn’t even make eye contact. Eventually, two young gentleman in white-collared short-sleeve shirts with literature and brochures explaining the good word set up five feet away from some folks sitting on the sidewalk with a cardboard sign saying “Anything helps.”

Taken aback by the scene, Emma turned to Dale and said, “Oh look, they’re selling religion on Government Street.”  And that was it.  The die was cast. There was no turning back. It had to become a song. Yes, the title was provocative. Yes, it might turn some people off.  But it would have been a shame to just leave that songwriting gold lying on the sidewalk.

Besides, the New Customs are known for creativity.

If you’re unfamiliar with the band, they are captivating performers and skilled multi-instrumentalists with great chemistry who bring to the stage, along with sublime harmonies, thoughtful storytelling and witty banter. Capable of going from foot-stompers to tear-jerkers, ballads to barnburners, The New Customs are doing their home city of Winnipeg proud tour after tour, album after album.

To donate to the campaign