Oh Susanna – June 7 at the Longboat Hall in Toronto 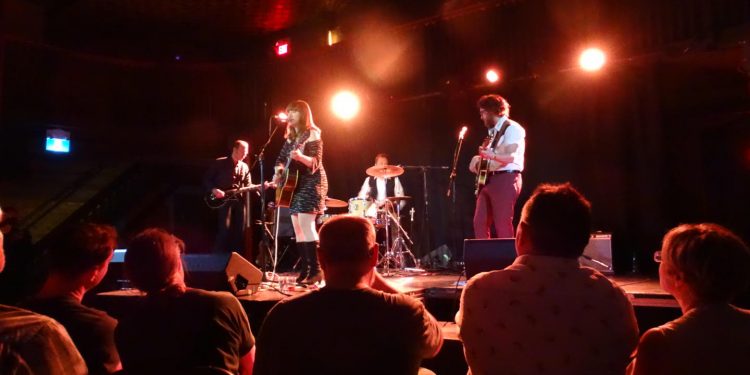 I was fortunate enough to catch Oh Susanna (Suzie Ungerleider) at the Longboat Hall in Toronto on Friday, June 7. It was a very special concert as it marked the 20th anniversary of her debut full-length album Johnston, which was released in 1999. Suzie also marked the event by releasing a limited-edition, hand-numbered vinyl-only version of the album. The concert was presented by Collective Concerts as part of NXNE’s Club Land series.

Longboat Hall is just one of the venues inside The Great Hall building located on Queen Street West in Toronto. The circa 1889 building was formerly the West End YMCA, and Longboat Hall is named after the 1907 Boston Marathon winner Tom Longboat, who had trained in the room. The Great Hall was beautifully restored in 2016, and the Longboat Hall was ideally suited for Oh Susanna’s anniversary show. It was my first time at the venue, and I will definitely be back.

The phenomenally talented Mo Kenney was the opening act and appeared solo to perform a stunning acoustic set. I’m a big fan of her earlier work and hadn’t seen her solo acoustic in a while so it was a huge thrill. Mo quickly got the crowd in a celebratory mood, setting the stage for what was to come next.

Oh Susanna took the stage, and the celebration continued. She performed all 12 songs from her debut full-length album. From the title track through “Tangled & Wild,” it was a beautiful set. My favourite remains “Back Dirt Road.”

Around half way through Suzie’s performance of the Johnstown album, she brought out a special surprise guest. Singer-songwriter Justin Rutledge joined her on stage for a duet on “Oh My Good Ol’ Gal” – a beautiful moment for everyone in the room.

It was an absolute pleasure to watch the ease with which Suzie performed and how she is able to deliver her vocals in an almost effortless manner. Only those that have this much talent can perform songs recorded over 20 years earlier with perfect pitch and without any difficulty. It was as though we were all watching a younger Suzie return to perform for us. Her relaxing demeanor put the crowd at ease almost immediately, and it felt as though she was celebrating the music just as much as her fans.

For the encore, she dug deep into her back catalogue to perform “River Blue” from 2001’s Sleepy Little Sailor. Then it was three in a row from her latest album, 2017’s A Girl In Teen City, with songs “My Boyfriend,” “Thunderbird,” and “Tickets On The Weekend.” She capped off a spectacular celebration of her music with “Right By Your Side” from her self-titled album from 2003.

It was a family affair on stage for Suzie Ungerleider, with her husband Cam Giroux (Weeping Tile, Luther Wright and The Wrongs, Shade) on drums. Cam co-produced and played drums on Oh Susanna’s 2007 album Short Stories. He also appeared on 2011’s Soon The Birds and 2017’s A Girl In Teen City.

Elijah Abrams (Jane Siberry & Major Love) appeared on bass, as he did on the A Girl In Teen City album.

The incredibly talented Nichol Robertson (The Layrite Boys, The Devin Cuddy Band, Whitney Rose and many more!) was the guitarist.

While I didn’t spot past Oh Susanna collaborators Bazil Donovan, Bob Egan, Colin Cripps or Jim Bryson in the crowd, I did spot singer-songwriter Shawna Caspi and Laura Spink (The Young Novelists) and said a quick hello. You always know an artist is worthy of your ears when other artists are willing to take the time to attend their shows. Kudos to Shawna, Laura and any other artists that were there for Oh Susanna.

Immediately after the concert, I was so inspired by Suzie’s performance that I popped by the merch table to buy a copy of her latest album, A Girl In Teen City. She was gracious enough to autograph it and the copy of the Johnstown anniversary edition that I’d brought with me.

What a fantastic evening!