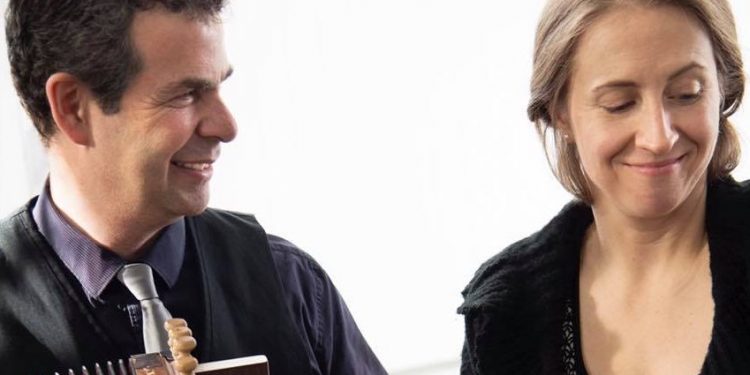 Once in a while something unique and memorable comes your way. This superb CD is one of those things.

Rachel Aucoin and Sabin Jacques from Québec are partners musically and in life. Rachel is a highly accomplished classical pianist from an Acadian family background. Sabin, also from a musical family, is a virtuoso player of the button accordion.

In 1984, when Sabin was barely an adult, he attended a concert near Rimouski, QC, where he heard the music of the legendary Québec accordionist and composer Philippe Bruneau. That experience transformed his life and ignited a grand passion for both the music and the accordion.

A chance listening to a radio program during an ice storm in 1997 lead to Rachel hearing Sabin playing the music of Philippe Bruneau, and she was transfixed. The couple met face to face at the Montréal festival La Grande Rencontre in 1999 and began a long and fruitful relationship. (They also play in the dance band Raz-de-Mareé/Tidal Wave that is well known in the contra dance world.)

This album, Grandes Rencontres, is a testament to many significant meetings that have taken place. The partnership of legendary composer/accordionist Philippe Bruneau with his accompanist Dorotheé Hogan was just the first.

Bruneau had a practice of composing gorgeous melodies and naming them for people he knew and respected. Of the 13 beautiful pieces on the CD, all but one is named “Homage to…” The piece “Un Canadien Errant” was not composed by Bruneau, but Sabin explains that this lovely traditional complainte was played by Philippe in such a way that every musical theme and variation explored every artistic possibility of the button accordion.

Boreal introduces their new member with a ...

Celebrate summer with live music on the ...