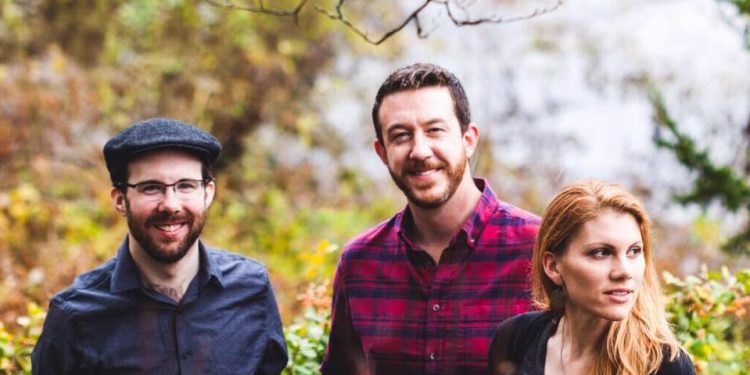 This lovely CD is yet another example of the cross-border pollination that happens among the fantastically good musicians from Canada and the United States. That arbitrary political line we call a border does not exist when musicians get together.

Fiddler Ellie Gould is from Quispamsis, NB and grew up surrounded by the music of Atlantic Canada. She has Celtic and Acadian influences, and also plays music from Scotland and Ireland, but her sound is uniquely New Brunswick.

On guitar, bouzouki, foot percussion and harmony fiddle, Tim Ball from Ithaca, in upstate New York, is a magnetic multi-instrumentalist who has been a regular on the northeastern USA contra dance and Irish music circuits for over ten years. Tim’s rhythmic contribution on this recording is just stellar. When you play regularly for dancing, you just know how to make the feet fly by themselves.

Michael Roddy, also from the Ithaca area of upstate New York, is a whiz at pipes of all kinds. On this recording, we have whistles, border pipes, smallpipes, bagpipes, and uillean pipes. For over 20 years, Michael has been refining his technique and approach to piping so that now, he has a singular style combining Scottish and Irish piping into something quite distinct.

Meeting Place evokes the idea of the New World – a place where old and disparate cultures meet and share musical ideas. Here, we have a bit of Scotland, a bit of Ireland, a bit of the French culture of Québec, and bits of both Atlantic Canada and the United States. It is indeed a meeting place of cultures and minds, and is a very listenable CD indeed.