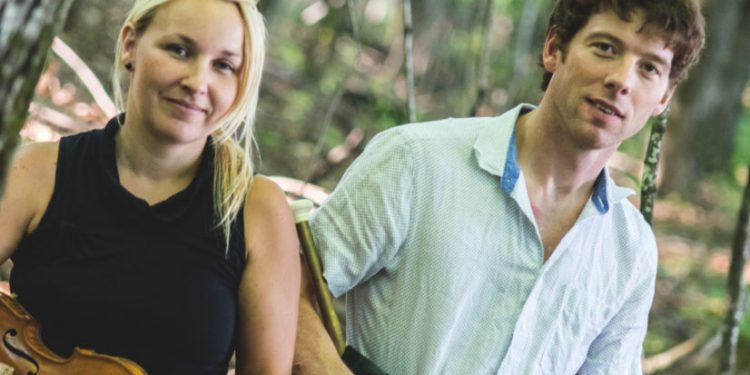 Since the days of the Irish potato famine that began over 150 years ago and the resulting mass migration of people to North America, Québec has benefited in a myriad of ways. Irish musicians pollinated Québec folklore with their tunes, dances and musical traditions, resulting in a very real synthesis of styles and melodies in that province. It is therefore completely understandable that Sophie Lavoie from Lac-St.-Jean, QC, and Fiachra O’Regan from Connemara, Ireland, found they could make beautiful music together.

Portraits is their third album; they joined forces with legendary guitarist André Marchand for this project.

Over the past years since they met, Sophie and Fiachra have crossed the Atlantic Ocean many times to exchange music with some of the best players from each culture. Players from both Québec and Ireland have much to contribute to the collective wealth of traditional music, and this recording pays tribute to those musicians.

Sophie is an accomplished fiddler, singer and composer, and her work is very ably enhanced with Uillean pipes, Irish cornemuse and whistles from Fiachra; guitars, feet and vocals from André; and other contributions from the guest musicians: Daniel Roy, Jacques Landry, John Carty and Brittany’s Malo Carvou.

Portraits is a giant and beautiful listen that combines the best from the folk traditions of both Québec and Ireland. It is a work of art in itself – a recording of beautifully-arranged sets of music with excellent production values.

The opening set is filled with traditional tunes from Québec, including “Le Casse-Reel à Aimé Gagnon,” a magnificent and driving reel from the repertoire of the late fiddler from Lotbinière, QC. It is remarkable to hear these Québec tunes interwoven with sounds you’re used to hearing from traditional Irish music.

Sophie grew up with her father’s extensive collection of vinyl LP records, and it shows. Her selection of traditional and contemporary tunes is fantastic, and she is a formidable composer in her own right. Fiachra has been playing pipes since he was a young teenager and has refined his techniques with some of the best bands in the business, including The Chieftans and Paddy Keenan. André Marchand, to aficionados of Québec trad music, needs absolutely no introduction, but for the rest of us, it suffices to say that he was one of the founding members of the province’s supergroup, La Bottine Souriante, and has gone on to have a stellar career as a guitarist, singer and composer, recording his own work as well as contributing to over 200 recordings by other artists and influencing a whole generation of upcoming young musicians.

Sophie and Fiachra have received so many beautiful tunes from the musicians they have encountered on their travels across the Atlantic. Sophie has collected melodies and songs from Lac-St-Jean and Saguenay. Fiachra has brought tunes he learned in Ireland. André brings songs from the collection he has spent a lifetime acquiring. Rounding out the selections on the album are four fantastic tunes that are Sophie’s own compositions. This recording is superb listening from a trio that truly understands the cultural and folkloric connections between Québec and Ireland.

Sophie and Fiachra have lots of tour dates coming up this season, and the album is available through their website. Do give them your attention.