Suzie Vinnick – May 17 at the Anza Club, Vancouver 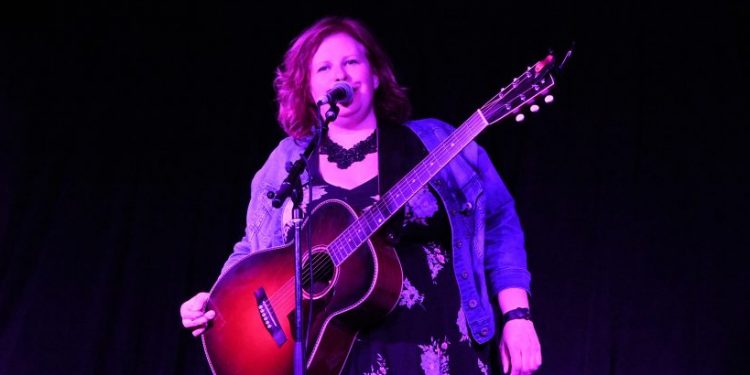 If the world was fair and just Suzie Vinnick would not be a “Canadian treasure.” She would not be known for winning the Canadian Maple Blues Award ten times, or for receiving dozens of other Canadian music nominations and awards. Nor would she be someone’s favorite “female” roots and blues artist.

No, if the world were fair and just, Suzie Vinnick would be a WORLD-WIDE TREASURE, one of everyone’s favorite artists. Period. She’s got it all – originality, chops, stage presence, beyond- amazing voice, and the ability to blow you away when you see her live – and on May 17 I had that experience.

It’s hard to know where to start when talking about Suzie. Do you start with the singing, the songs, the guitar playing, or the bass playing? I’ll pick the first one that probably hits most listeners first.

Suzie sounds like no one else. Suzie reminds you of every great singer you know. Suzie’s a powerhouse. Suzie’s a sensitive singer-songwriter. She’s got the pathos of Lucinda Williams, the purity of Shawn Colvin, the soulfulness of Bonnie Raitt, and, like all the greatest singers, her vocal technique and emotional output are perfectly matched. Yes, her range and power and blues riffs are there, but they never overshadow the pure feeling of the song. She takes blues clichés and un-clichés them. It’s a voice that you don’t forget.

Come on people, the woman f***ing rocks! She takes blistering solos, and the place goes wild. It’s like you’re seeing two performers at the same time: the one who sings and the one who plays guitar, and they are seamless. Again, the classic blues riffs and fills are there, and it’s familiar, but it also sounds fresh, as though you’re hearing these licks for the first time. When the opening act’s guitarist, Curtis Debray of Harris and Debray (more about them later), joined her for the last song, “Crazy ‘Bout Lovin’ Me” by Roy Forbes, and the encore, the gypsy jazz flavored “Save Me for Later,” the two traded solos, and it was a blues-guitar lover’s dream. When Curtis was playing rhythm (no slouch of a guitar player either!) Suzie was really able to cut loose on solos. She doesn’t play “great for a girl.” She IS a great guitar player.

Most of the songs she chose to play were songs from her newest album, Shake the Love Around (reviewed here)

It’s hard to separate Suzie’s songs from her playing and singing because the woman could make ANY song sound good. There was not a song in the two sets that I didn’t enjoy but there were some that especially stood out for me. These were “Beautiful Little Fool,” “The Golden Rule,” John Fogarty’s “110 in the Shade,” “Happy Here,” and perhaps my favorite, “Drift Away” (a co-write with Matt Anderson, who first recorded it on his album). A quick side note here: I sat with two women I’d never met before, Petra and Louise, who were hearing Suzie for the first time. After Suzie’s first song, one leaned over to the other and said, “yeah,” and after the show Petra told me “Drift Away” made her cry.

I didn’t think I could be any more impressed than I was, but then Suzie picked up a bass for (sadly) one song, “Danger Zone,” by one of Suzie’s early heroes, Ellen Mcllwaine. (Mcllwaine’s Honky Tonk Angel was an album I wore out.) Wow! Talk about a singing bass player! Perfect time and syncopation while singing – her ass off. She obviously could’ve had a successful career JUST as a bass player. Any band would be lucky to have her.

There’s so much more that could be said about seeing Suzie Vinnick live. Did I mention she’s a great storyteller, incredibly charming, and a gracious performer?

She may be primarily known as a Canadian blues artist but Suzie Vinnick is so much more.

I caught the last half of opening act Harris & Debray and was sorry I wasn’t there for the whole set. Leslie Harris is the primary lead vocalist (on electronic kick drum and high hat) with the previously mentioned Curtis Debray on guitar and vocals. Leslie has a great classic, smoky blues voice, and Curtis is a great guitar player, so their mix of originals and blues covers was the perfect way to start the night.

Want to host a touring artist in ...

Sophie and Fiachra and André Marchand – ...