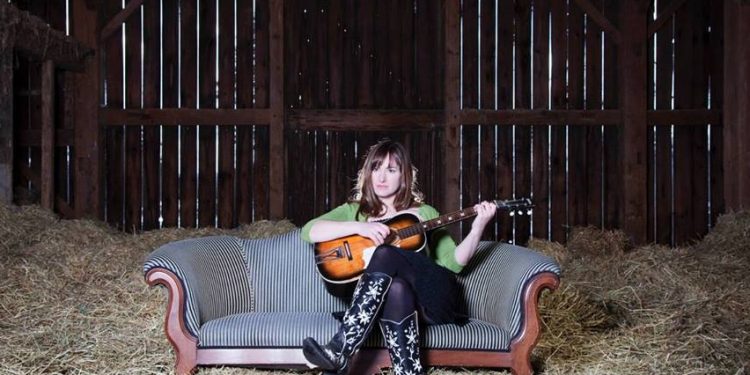 “You got a package in the mail,” reads the text from my wife. I’m on the road for work and won’t be home for a few more days. “Can I open it?” she writes. “Sure,” I reply. Her next message is a picture of an album cover. It features a drawing of a woman running along a line of telephone poles with a red, black and yellow sky. It’s a limited-edition, hand-numbered vinyl-only release celebrating the 20th anniversary of Oh Susanna’s full-length debut album Johnstown. My request to review the album had been graciously accepted, and now, I’m even more eager to get home!

The anniversary of a debut album is a very special occasion for an artist, as well as any longtime fans that have been with them since the very beginning. It celebrates the fact that the artist has been able to continue to make a career in music and provides an opportunity to reflect upon the start of something that turned out to be pretty amazing for everyone involved.

However, it’s also a great opportunity for an artist to gain exposure to even more fans. If people are still talking about an artist’s debut album two decades after its release, those of us that missed it the first time around are certainly more inclined to pay attention now.

Like most of the music I hear, Oh Susanna came recommended by people I respect. Her live show has been on my list for some time. Unfortunately, while I’d heard her vocals on a few albums I own, I’d only been able to see her perform live once, with Lee Harvey Osmond & Friends at Supercrawl 2013 in Hamilton, ON. I’d yet to even hear Johnstown. Clearly, I had missed the ”Oh Susanna boat,” so why was I so excited to receive the rerelease in the mail?

The thrill of discovering music new to you can be the same regardless of how long the music has been around. If it’s good music it shouldn’t matter how and when you hear it. I’d heard nothing but acclaim for Oh Susanna, and I knew I wouldn’t be disappointed.

Oh Susanna’s Johnstown album was originally released in 1999. The album features songs that reflect on the fragile and delicate nature of our emotions, so it’s apropos that Oh Susanna chose the 20th anniversary to rerelease it. After all, the traditional gift for a 20th anniversary is china.

Suzie Ungerleider, who performs under the name Oh Susanna and once described herself as a nomad, was born in Massachusetts and raised in Vancouver. She studied in Montreal and later moved to Toronto to continue her career as a singer-songwriter. Since 1997, she’s released an EP and seven albums. Her music is critically acclaimed, has earned her a Genie Award and a Canadian Folk Music Award, along with two Juno Award nominations.

Johnstown was produced by the incredibly talented Peter J. Moore. Peter is an award-winning Canadian producer who worked with Cowboy Junkies on their groundbreaking album The Trinity Session, created music for the movie Hard Core Logo and was responsible for remastering Bob Dylan and The Band’s The Basement Tapes. For Oh Susanna to have been able to work with such an accomplished producer for her debut full-length album is quite an achievement and should earn her the respect of any music fan.

For the 20th anniversary edition, Oh Susanna once again called upon Peter J. Moore, but this time, it was to remaster the original recordings for a limited-edition vinyl-only release. Only 500 hand-numbered copies were created just in time for Record Store Day. The rerelease features nine remastered songs plus a free digital download card titled A Shot of Oh Susanna that features five acoustic versions of songs. It also includes a really interesting limited-edition poster by comic artist Hank Pine featuring lyrics to the title track.

Side A opens strongly with the title track “Johnstown,” a chilling folk-noir murder ballad. It’s also the only song on the album that mentions the flood in Johnstown, PA.

“Old Kate” is a beautiful country-folk song about someone seeking to find a lost lover.

“Pueblo” is set in Taos, NM over 325 years ago and deftly shares some history of the Pueblo uprising against Spanish settlers.

Side A concludes with “The Bridge.” It highlights Oh Susanna’s stunning vocals accompanied by the perfect arrangement of instruments. The alt-country song is about a young bride looking to escape.

Side B opens as strongly as Side A with “You’ll Always Be,” an eery and powerful song that is surely a crowd favourite when performed live. It concludes with a single, lingering note on the piano.

“Alabaster” is another beautifully-produced song and tells the tale of a woman longing for a lover who is far away from home. It also features a surprising yet fitting sitar solo.

“Home Soon” features a male narrator singing of having to leave a lover who he feels he is unworthy of. He pleads for her to wait for him.

“Back Dirt Road,” a toe-tapper, is the standout single from the album. In it, a female narrator reflects upon being a former runaway teenager in love. The song is poetically anthemic, its purposely stark arrangement skillfully highlighting Oh Susanna’s lyrics and vocal prowess. It’s my favourite song on the album.

The album concludes with the song “Tangled and Wild.” It’s just a beautiful country-folk song and was co-written with Blue Rodeo’s Bazil Donovan. No doubt anyone Oh Susanna has sung with over the last 20 years was convinced of her talent after hearing this song. It tells the tale of a city dweller dreaming of the countryside and its escape.

Oh Susanna’s Johnstown certainly didn’t need two decades to mature. For a debut album, it sounds as mature as many albums released by similar artists who had already been creating music for 20 years when it was released. Yet one can still hear the gratifying fearlessness of the writing and the vocal delivery in the original recordings. Speaking as someone just now discovering Oh Susanna’s work, it was immediately apparent upon listening to the Johnstown rerelease that this artist would still be creating new music two decades later. Johnstown sounds fresh, even today. That’s a rare feat for a debut album.

Oh Susanna will be celebrating the 20th anniversary of Johnstown at Longboat Hall in Toronto on Friday, June 7. Opening the show will be the incredibly talented Mo Kenney. If I don’t have to be on the road for work I’ll be there!

Want to host a touring artist in ...