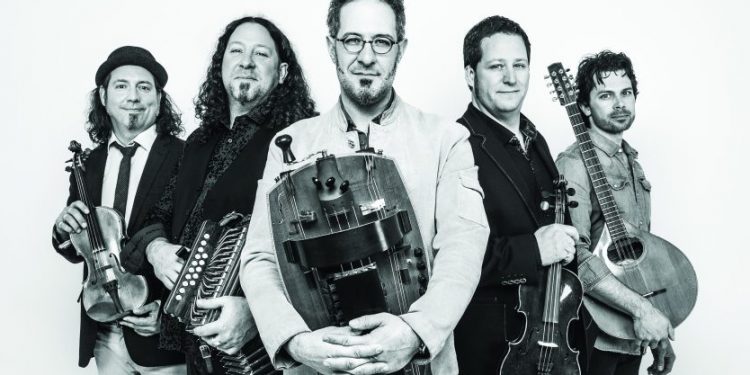 Festival Mémoire et Racines was founded in 1995, a one-tent-by-the-river affair in the town of Saint-Charles-Borromée, which is situated in the greater Joliette area northeast of Montréal. This is the Lanaudière region, perhaps the epicenter of the Québec folk music scene – where the soul of Québec folklore resides. The nascent festival kick-started the renaissance of the province’s folk scene and spawned a movement – a myriad of young musicians who are carrying this torch forward into a bright future.

Festival Mémoire et Racines, the 25th anniversary edition, will be held from July 24 to 28, 2019. It is still by the river, but it now has at least seven performance venues on the site and dozens of performances scheduled over the weekend. The 2019 festival promises a spectacular program, celebrating the history, looking back over those 25 years, and looking forward to the next generation.

Hot off the press this week is the amazing schedule of performances.

The 2019 festival will feature most of the best bands from the trad music scene in Québec today – and more. There will be nods to the past and views of the future of Québec folklore, and everyone will be there.

Headlining the festival is the acclaimed and multi-award-winning band Le Vent du Nord: Nicolas Boulerice, Olivier Demers, Réjean Brunet, Simon Beaudry and André Brunet. They are five of Québec’s most accomplished and charismatic performers, with their trademark sound that regularly travels the world. They say it is an ill wind that blows no good, but this north wind today blows beautifully clear and fresh QuéTrad air around the world. It makes people very happy.

We will be very excited to hear La Galvaude on stage; they are a nod to the past.

this was the first band launched by musicians Éric Beaudry, Stéphanie Lépine, Bobby Bordeleau and Michèle Mercure. All four friends were student musicians from the CEGEP school of traditional music in the Lanaudière region, and La Galvaude was one of the bands that performed on that river front stage during the very first festival in 1995.

Sébastien Dubé (Sweden/Québec) will be the Artist in Residence for the Town of Joliette this year, matched with fiddler/mandolinist Michel Bordeleau. We have heard that Sébastien is one of the best five-string double bass players in the world. Sébastien will be playing on several stages over the festival weekend and presenting, with Michel Bordeleau, some of his work from the Artist in Residence program.

Le Bruit Court Dans La Ville is another nod to the past years of the festival. This band is a trio formed by three legends of Québec trad music: Lisa Ornstein, Normand Miron and André Marchand. Lisa’s fiery fiddle and André’s meticulous guitar accompaniment will be joined this time by the pulsing accordion sounds of virtuoso Sabin Jacques, filling in for the ailing Normand Miron. We wish Normand a speedy recovery!

Yet another nod to the past is the duo Les Frères Brunet, the two brothers who actually opened the first Festival Mémoire et Racines in 1995. André and Réjean Brunet are now both members of Le Vent Du Nord but have individually each been instrumental in many prominent and important Québec bands of the last 25 years, including De Temps Antan, La Bottine Souriante and Domino, to name only a few. We are completely delighted by the prospect of hearing the music that these great musicians grew up with in their family’s heritage.

De Temps Antan has been shaking up the contemporary folk world for over a decade. Its latest incarnation with fiddler David Boulanger, accompanist Éric Beaudry and harmonica/accordionist Pierre-Luc Dupuis is stunning in its energy and enthusiasm for bringing new life to old melodies and songs.

Les Grands Hurleurs features three of the best who have grown up immersed in trad music since Mémoire et Racines was founded. Nicolas Pellerin, Stéphane Tellier and Simon Lepage present an explosive performance that engages every part of your soul.

You might say that Les Poules à Colin represents the future of QuéTrad. This is a quintet of young people formed by five friends who grew up in famous Québecois musical families. Colin Savoie-Levac, Sarah Marchand, Béatrix Méthé, Éléonore Pitre and Marie Savoie-Levac have been touring the globe, showing the world that traditional music from Québec has never been, and never will be, just for old folks.

Demonstrating that Quebec folk tradition extends way beyond the boundaries of the province, Pete’s Posse, from Vermont, has also been invited to perform at the festival. Pete Sutherland, Tristan Henderson and Oliver Scanlon tap into many traditions but really should be honorary Canadians and Québécois with their tight, highly rhythmic arrangements and exciting performances that demonstrate just how connected we all are across that international border line.

These are just a few of the amazing bands that will knock your socks off over the weekend. There will be bluegrass, old time music, jazz, Scottish, Polish and French music, and much, much more.

Talisk, the 2017 Scottish Band of the Year will captivate us with multi-layered concertina, fiddle and guitar. Tipsy 3, three women from New Brunswick, Nova Scotia and Québec respectively, will take us on a musical journey across Canada and beyond. Andrew Collins Trio showcases the very able talents of multi-instrumentalist Andrew Collins, by all accounts the best mandolin player in Canada. Cedric Watson and Desiree Champagne bring from Louisiana the ancient fused sounds of France, Spain and West Africa in their Cajun, Creole and Zydeco music. Damn Tall Buildings, from New York City, will bring us their crazy cool bluegrass music, the vibe of which originated from the band’s busking experiences.

Mémoire et Racines is famous for its dancing as well. Friday and Saturday evenings, the Centre Bosco dance hall on the festival grounds swells with dancers ready to twirl. Live music sets the scene, and highly accomplished dance callers (Gilles Pitre, Marie-Soleil Pilette) make sure that everyone knows the moves in these very fun Québecois square dances.

New this year, the festival is presenting two after-hours concerts that will take place in Centre Bosco after the evening dances conclude. Hommage Aux Aînés from the village of St. Côme will play Friday night and De Temps Antan will play Saturday. Sleep will be optional this weekend.

Mémoire et Racines is also presenting eight free concerts in Joliette and the surrounding municipalities on Wednesday and Thursday prior to the festival weekend. When you give people a taste, they are sure to want more! Be sure to check out the website for all of the events and the locations.

And, don’t forget to bring your instrument for the weekend.

Perhaps the best-kept secret about this festival is the jam sessions that occur under the cover of darkness after all of the formal events have concluded for the night. Whatever you play, it has a place here: fiddles, flutes, accordions, guitars, double bass, whistles, pipes – all are welcome to come play. Side stages are converted to session tents, and the food court, with its well-appointed bar, usually becomes the venue for singers who fill their lungs and belt out the fantastic call-and-response songs that distinctively mark this QuéTrad culture.

Mémoire et Racines is a festival like no other in Canada. This is joyous Québecois culture that makes you feel incredibly welcome no matter where you’re from. Do yourself a favour and come to greater Joliette, Québec, for the last weekend in July.

Why Heather can’t get enough of Celeigh ...