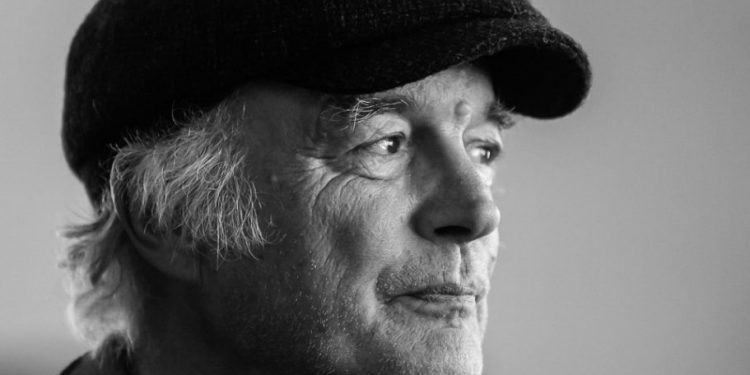 Ian Tamblyn has written more than 1,500 songs over his lifetime and released more than 30 albums, earning a Juno nomination and a Canadian Folk Music Award in the process.  So we were thrilled here at Roots Music Canada when he offered to share some of his wisdom with us. Ian has reflected on and written about many facets of artistic life over the years, and we’ve be publishing some of those writings here on the site.  Thank you, Ian!

There is a poem by Edward Dorn called “The Gunslinger.” In this poem, he describes a sharp shooter of a different persuasion – a Billy the Kid of the pen. In this case, the gunslinger is a writer or a poet who is fast on the draw and quick to describe his victims. He wanders the west describing people and the landscape, he is wicked and precisely accurate in his descriptions. He is the best in the west, but at the same time, he becomes paranoid that others will describe him faster – better. And so part of who he is, to avoid description, is always a shifting target. In past articles I have written about this “gunslinger” being an apt metaphor for pop music and some of its characters, like Dylan, Lennon, Bowie, Madonna, and Lady Gaga, who are or were always shifting their images to avoid description and so remain alive and interesting to the pop world and attendant media.

In this article, I would like to concentrate on how this “gunslinger” got to be so good. It is pretty simple really: find your object of description and learn to hit it every time – not a glancing wound but a shot to the heart. Eliza Gilkyson said, “I was hotter than a pistol, but I just wasn’t hot enough,” referring to her songs and career in Los Angeles before she broke through 10 years later. It seems simple – a target and a methodology to hit that target every time. But clearly it is no more simple than the dart player who hits triple twenty every time, or the archer who hits the bullseye every time. How do they do it?

I have made this point before but part of the talent is to recognize the target. What is it you are writing about? Is the object worthy of description? Is it a story that needs to be told? Is it an emotion that needs to be described? Is it a target that is lurking but not yet revealed? Kenneth Tynan, the great British critic, essayist and playwright wrote of his involvement with the arts, saying first you have to assess the worth of the undertaking (the target), second, you have to assess the process towards this goal, and finally, you have to assess your success or failure in the execution of the goal. In some ways, songs are similar. Once one has assessed the validity or worth of the song field, the really hard slog to the finished product begins. This is where practice (the doing of the craft) begins. You have to develop the gunslinger’s (songwriter’s) eye and mind for the target. Observational skills are essential and ever present. But what about your methodology to achieve this worthwhile target or goal?

I believe it is important to make writing a habit, a work ethic. Meet with your writing self everyday. Make that commitment, and you will get results. No flukes or blind luck as welcome as that is at times. If you leave it up to the muse alone you will find fewer and fewer songs drop down, because it is a very distracting world, and the muse is as distracted as you are. The truth seems to be that you are connected to your very own muse – it is not a general muse – and your distractions are hers as well. However, if you are writing every day, the words, the phrases, the voices, the direction, the musicality will get more precise. The muse will be informed of that newfound or greater skill, whether she is present or not, and when the muse returns, your greater accuracy will be applied to the process. You will find in time the zone. It is a strange phenomenon to experience this zone for the first time because it may appear to be some other person writing or a visit from the muse. And yet, it is only you experiencing your sharpening pen. Doors of expression open to you that previously weren’t there, connections between music and verse become more intertwined with your heart and your head, and soon you will be writing music with imaged words or words with an imaged music. As you go further into this, it begins to be like a form of juggling as layers of a song can exist at the same time, and you might be writing (simply!) but on two or three levels. Take for example the number of levels Cohen is writing on in his beautiful song “Famous Blue Raincoat,” or the prophetic nature of his song “First We Take Manhattan,” written more than a decade before the twin towers fell. But do not stop at the first time you experience this because the point is to achieve the level of writing and beyond to the point where you can replicate this accuracy, this acuity, every time. And this demands constant repetition of action, like a muscle movement, only this muscle movement is in the brain and heart. An excellent analogy can be found in Eugene Herrigel’s excellent book called Zen and the Art of Archery. He makes several wonderful points if I recall correctly … The first is seeing your object, your target, clearly. The second point he makes is your task of connecting the arrow to the target. His point is that, with good practice, the arrow is connected to the target already and the good archer (songwriter) will join their eventuality. He also says each time you draw the bow, it is an opportunity for perfection, for the arrow to join its perfect destiny. And the last point he makes, which I think is very true and frequently throws us off, is don’t want it too much. Do not seek your target with desire. Sometimes when you watch Serena Williams play her best tennis, it appears as if she is somehow disengaged from her desire to win the point. She is playing another game on another plane. She is a gunslinger. And you can become a gunslinger of song, but it is not easy, and, it is not easy to maintain.

A few days ago, I was enjoying a series of interviews with two songwriters who seem to be always in the zone and on their game: Tom Waits and Randy Newman. In both cases, their personalties projected and mirrored their songwriting perfectly. That is to say, they were so into the game, they were their songs. Tom Waits was the gruff, absurdist, Bukowski character he often writes about in his songs. There he was, totally disheveled, uttering a list of seemingly random one liners, very similar to some of his song techniques. Randy Newman, on the other hand, was sardonic and ironic in his responses and as quick to turn self-deprecation into a sharp comment. Listening to both of them gave me the impression that they lived in a state of songwriting readiness all the time. I am sure songwriting can be as agonizing for them as for anyone else, but in both cases, they appeared to have “guns drawn.” Years before, Randy Newman proved this point after being on the Dick Cavett Show when he wrote “Rednecks.”

When you think of the current state of affairs, it would seem not only was Newman accurate, ironic and wickedly funny, he was remarkably prophetic to comment on our ability to completely miss what is really going on. Lester Maddox and Donald Trump – two fools we thought ourselves too smart to appreciate their attraction. Newman in the zone.

Elliott BROOD is performing this month with ...