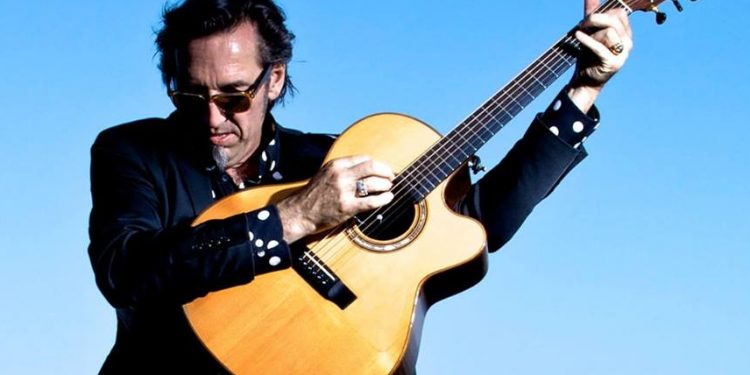 On Friday, April 5, I was fortunate enough to return to The Registry Theatre, an intimate soft seat venue located in Kitchener, ON. The occasion was night one of the sixth Registry Roots Weekend that featured musician, singer, songwriter and producer Stephen Fearing with special guest Kellie Loder, who performed for a capacity crowd of attentive fans.

Stephen, who has received multiple Juno and Canadian Folk Music Awards, as well as numerous nominations, was touring in support of his latest work of art, a limited edition vinyl-only release entitled The Secret of Climbing. The Registry concert was one of many sold-out shows during Stephen’s latest tour.

Stephen was gracious enough to autograph the copy I purchased after the show that now sits alongside my autographed copy of his debut album from 1988 entitled Out To Sea and his sophomore album Blue Line from 1991.

The Secret of Climbing is a beautifully-crafted eight song LP within an artfully designed gatefold cover, which was meticulously produced by Roy Gandy, Gary Bennet, and the artist himself. The story behind the making of the album is almost as intriguing as the music.

Stephen’s latest release stands out among many of today’s recordings because of the methodology used to produce it. A chance meeting between Stephen and Roy Gandy, co-founder of UK-based Rega Research, eventually resulted in a two-day recording session that utilized just two mics, one to record Stephen’s vocals and another to capture his Manzer guitar. The analogue tape recordings were later transferred directly to vinyl without any overdubs. Roy also insisted that Stephen restrict the album to just eight tracks in order to preserve the quality of the sound. An intriguing story for any audiophile.

The album artwork features stunning black and white photos by Jason MacNamara, Mark Maryanovich and Lisa MacIntosh. Upon opening the gatefold, the listener will discover a beautiful liner note written by David McPherson, author of the book The Legendary Horseshoe Tavern – A Complete History. Below David’s liner note is a compelling quote from Nelson Mandela: “After climbing a great hill, one only finds that there are many more hills to climb.” Also included is a free digital download.

The Secret of Climbing features seven previously-released tracks and one cover.

“Johnny’s Lament” is an incredibly beautiful and soulful song and sets the tone for the album with its stark yet completely satisfying arrangement. The song is a tribute to the late Johnny Cash and first appeared on Stephen’s 2006 album, the Juno Award-winning Yellowjacket.

“Just in Time to Say Goodbye” is absolute perfection. The recording highlights Roy Gandy’s ability to capture Stephen’s stunning vocals and exceptional guitar playing. The listener is left feeling as though the artist is singing just for them. The song was co-written with Erin Costelo and first appeared on Stephen’s 2013 album Between Hurricanes.

“The Things We Did” is the toe-tapper on the album. It’s a clever song about an obituary writer coming to terms with advances in technology and his own mortality. The song was co-written with Tom Allen, host of CBC Radio Two’s Shift, and first appeared on Stephen’s 2017 album Every Soul’s A Sailor.

Side One concludes with “Every Soul’s a Sailor,” a song destined to be a classic among Stephen’s live performance repertoire. His skillful presentation on this version offers the listener a surprisingly anthemic song despite soft and subtle vocals. The song is the title track from Stephen’s 2017 album.

Side Two kicks off with the sole cover song on the album, “Time” by Tom Waits. Like any great interpreter Stephen maintains the ability to express the intent of the original while at the same time making it his own with the use of clear, rich vocals and crisp and light guitar playing. It’s like you’re hearing Tom Waits’ lyrics for the first time all over again.

“When My Baby Calls My Name” is a beautiful lullaby and the oldest previously recorded song on the album. Stephen has said it ended up in the recording session because a European radio host loved it so much. It first appeared on Stephen’s 2000 album So Many Miles: Stephen Fearing Live.

“Red Lights In The Rain” is my personal favourite song on the album. Stephen’s artful lyrics and beautiful melody weave a tale of leaving and loneliness that will surely brush the heartstrings of even the most hardened listener. The song first appeared on Stephen’s 2017 album Every Soul’s A Sailor.

The Secret of Climbing wraps up with a fitting tribute to the late Nelson Mandela. “Long Walk To Freedom” first appeared on Blackie & The Rodeo Kings’ 2016 album Kings And Kings. While BARK fans will immediately notice the lack of Keb Mo’s guest vocals and guitar playing found on the original, Stephen’s solo version does not disappoint as it still provides the listener with an uplifting and motivational reflection on the life of one of the world’s greatest humanitarians.

The methodology used to record The Secret of Climbing is truly fascinating and results in Stephen Fearing’s unparalleled talents being presented in their absolute truest form. A pleasure for any music lover, I highly recommend this album to any Stephen Fearing fan, record collector or audiophile.