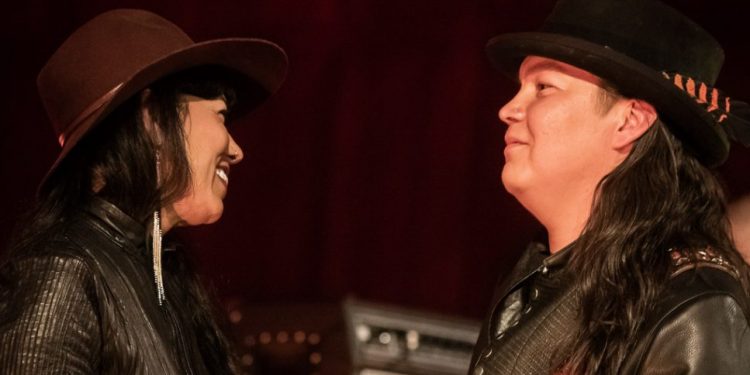 If ever there was a music festival that deserved the moniker “grassroots” it would be the Ottawa Grassroots Festival. It is run by a dedicated group of volunteers who share a common love of local homegrown folk music. Southminister United Church was once again the venue for all the events.

This year the festival included headline shows on Thursday, Friday and Saturday evenings, as well as all-day (free!) events during the day on the weekend.

The Thursday evening show was a celebration of Franco-Ontarian music. Francois Lemieux opened the evening. Francois began performing in the 70s, but, as he willingly admits, drugs and alcohol got the best of him for a while. Clean for decades, his most recent CD is aptly titled Wreckovery.

Being conversant in the French language was not a prerequisite to experience the deep emotion of his music and poetry. He instantly connected with his audience, easily getting everyone to sing along with him, even though some didn’t understand the language. The rich timbre of his vocals filled the cavernous and acoustically pleasing church hall.

For his darkest numbers, such as “Stinkin’ Thinkin” he would switch to his trusted six string Gibson bass. In later conversation, Francois explained how this special instrument came into his possession:

“I was running a hotel at the time. A musician couldn’t pay his bar bill. He offered it as payment.”

Francois then spoke of the raw emotion of his more sombre, almost guttural music. He explained the need for these foreboding tones this way: “You have to let the darkness out. It is like a pile of manure. If you leave it there in a pile, it will continue to stink, to fester. Nothing will change. You must rake it out on the field, let the sunshine in. Express it. Only then can we grow.”

The evening was also an opportunity to meet up with some of the legends of the Franco-Ontarian music scene. Francois was an original member of CANO (Cooperative des artistes du Nouvel-Ontario) which started as an artists’ collective in Sudbury in 1970. Robert Paquette and Marcel Ayman of the original group were front and centre to enjoy his performance. The lighting and sound production was masterfully co-ordinated by another CANO original, Mark Delorme. Nary a complaint was heard from any musician throughout the evening asking for a tweaking of a monitor or a microphone.

As the headline act, Le Paysagiste moved us to a different place to conclude the evening. The band consists of Dayv Poulin on lead vocals and guitar, Loni Konkal on backup vocals and Cory Lalonde on drums. Their energy level is infectious. Loni’s sweet vocals were a perfect balance to Dayv’s high energy stage presence. Dayv claimed the stage to himself for a rocking medley of song, including an interlude of Lou Reed’s “Walk On The Wild Side.”

On Friday evening The Toasted Westerns (Sally Robinson, Jody Benjamin and Ann Downey) reunited to perform as the opening act. You wouldn’t have known they hadn’t performed together for a decade. Their love and respect for each other shone through on stage as they played off each other flawlessly.

It was then time for Ian Tamblyn to perform. It is easy to toss out words such as “iconic” or “legendary” to describe Ian, but most importantly he is an unabashedly delightful story teller. He took us not just across the country, but around the world as he weaved personal heartwarming (and at times heart wrenching) anecdotes together with his rich vocals and guitar playing. He took us to the three Canadian coasts and many points in between. We watched the Sable Island horses tease the seals. We hiked north of Prince Rupert to swim with the salmon. We paddled our canoe on Lake Superior. We felt the wind in our faces and the sweat on our brow.

Ian was joined on stage by some great players. James Stevenson took us to the misty wilds of Scotland with his fiddle playing as Ian sang his touching love song “Angel’s Share.” Fred Guignon was masterful on guitar, readily switching to his lap steel guitar as needed. Rebecca Campbell provided back-up vocals, and Pat Mayer was on bass.

Ian performed again on Sunday afternoon in a more intimate venue. Whether by plan or lucky chance, the sound system, for the one and only time, would not perform. “Well, gather around. Let’s make a semi circle,” he urged, as he pulled his own chair off the low stage. Quickly, dozens of chairs started to scrape the floor as everyone cuddled close. “Woah!” he exclaimed with a grin on his face and a twinkle in his eye. “I’m not great with crowds.” He was settling in. Storytime was about to begin. He took us to Antarctica to touch the minke whales. We headed to Hopedale, Labrador and sang “The Ballad of Mark Jarareuse” with him. He shared his sadness in reuniting with Mark many years later, noting how the light had gone out.

A first for the festival, an entire evening was devoted to Indigenous music. Elder Albert Dumont opened the Saturday evening show with poetic words of prayer and welcome. It was then time for local artists Doreen Stevens of Kitigan Zibi to take the stage. Her spirit name is Anamitagize-Odaying – One who speaks with the heart. Unquestionably, that large church hall was filled with heartfelt truth. Doreen sang and beat her drum. She was supported by Melissa Page on backing vocals, Carmel Whittle on drums, and Patricia Reynolds on guitar. The sound was rounded out by the performance of Olga Safarova playing a rich sounding recorder (or similar woodwind instrument). It blended beautifully with Doreen’s soothing vocals and filled the large hall well.

After a short intermission, we were introduced to a significant change of pace. Digging Roots describe their musical style as a blend of “folk-rock, pop, blues, and hip hop with First Nation music.”

Their sound is as big and brash as the above description suggests. They take the stage, and they own it. Raven is a powerful and accomplished guitar player. He knows no bounds. You travel with him to the heart of southern blues, then up to Chicago for a taste of how they play it in the north. Sprinkle in some rock, a bit of hip hop, and brush it with an Indigenous soul. His playing is the perfect complement to Shoshana’s soaring vocals.

Beyond the music though, is their demonstrable love for each other. You could see it in the twinkle in their eyes and the smiles and laughter that danced across the stage. Their drummer is none other than their twenty-year-old son, who rocked it out and shared the love with his mom and dad.

For some, this performance might have been a “bridge too far” to be playing in the same festival as the much quieter master Ian Tamblyn. Electric and loud it was. But then, didn’t Dylan shock and upset some folks at a similar type of festival? Sometimes, you need to shake it up to see what shakes out.