What makes a memorable show? Mike from the Arrogant Worms weighs in 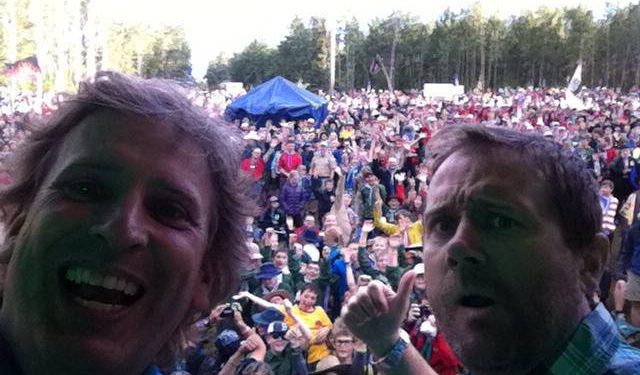 What makes a perfect show?

Maybe “perfect” isn’t the right word. How about a memorable show?

Sometimes there will be a series of shows where things go really well, but then one just doesn’t work. So you remember the stinker – and really, if all you remember is one stinker, then things are probably going pretty well for you. Then there’s the ones where everything is set up to fail. All the notes you have about the show make you worry. Or cringe. Or drink. It depends upon your personal coping mechanism.

Our group had one of those on our recent western tour. Everything seemed set up for a train wreck of a show; it was a small community we’d never been to before, the group had never presented a show before, they’d just purchased new sound gear, they’d “really like to make us dinner,” the hotel “they’d heard good things about.” A lot of red flags.

Happily for us, the show ended up being memorable for all the right reasons, instead of all the wrong ones.

We got to town relatively early and tried to check in early at the hotel. Sometimes even something this simple can be difficult. Whose names are the rooms booked under? The venue? The booker? Us? The band name?

“Is that Worm or Arrogant as the surname? So it’s Mike Arrogant? There’s nothing here…”

No problem at all this time though.

“The rooms are ready. Here are your keys.”

Soundcheck was a bit rough, but once we figured out how things were patched, all made sense. The dinner was great and the conversation pleasant throughout – yet within that, everyone was also quite respectful of us needing our own time and space before the show. The performace itself was great. The show was sold out and had a great mix of longtime fans, some of whom had traveled a fair ways to see us, and many local residents who wanted to support the venture. For us, this is a perfect mix. Some will have a new reaction to jokes and songs we’ve done for years, whereas others in the crowd will be singing along. Following the show we met lots of people who wanted to say how much they’d enjoyed it, and we ended up selling a lot of t-shirts, as it was very rare for these people to see their town listed on a tour t-shirt.

So don’t judge the book by its cover. Just because people are inexperienced doesn’t mean they can’t present a great show. However, you can help out too. Here the people on our side did a good job as well. Our agent took the promoter’s call and gave them the information they needed. We tried to make sure our fans knew about the show and did our best on the day to smooth over any potential problems. Hopefully, they will book us – and others – again.

A positive experience for all.

And then the next night…