Ellen McIlwaine is still playing the blues – with a feeling 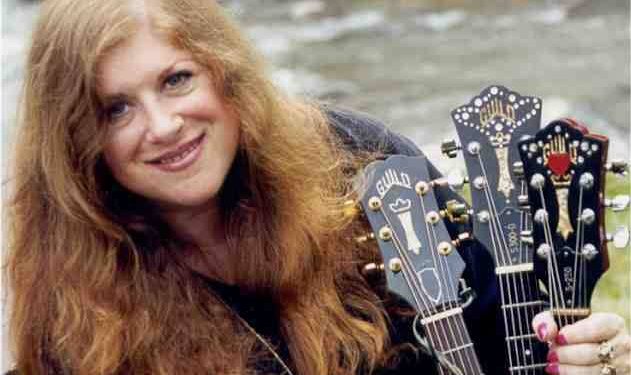 “I’m just so excited about what I got in the mail today! It’s pretty, and it’s blue, and it’s shaped like a maple leaf,” Ellen McIlwaine exclaimed.

She has just come from her mailbox in Calgary, her home for the past 20 years, and unwrapped her Blues With a Feeling award. Sent to her by the Toronto Blues Society, the prize honours a lifetime of artistry in the blues.

“I’ve never gotten an award before,” she sighed. “I’m feeling very proud. I look at it every day, and it lifts my spirits. I sure am appreciative of all the people that voted for me. [It] makes all the difference.”

Perennially nominated, her unforeseen win set off a rush of cheers at the Maple Blues Awards gala at Koerner Hall in early February.

Her friend, Stony Plain Records’ Holger Peterson, was there to accept it for her and to read her meaningful words of gratitude:

“We owe a huge debt to all the African people who were brought to North America against their will, out of whose anguished hearts the blues was born
and which today speaks directly to the hearts of you and me. I want to thank everyone who supports the blues.”

As a citizen of the world who dwells authoritatively in transcultural hemispheres of song, does she feel comfortable being hailed as a member of Canada’s blues community?

“Oh yes, definitely,” she said. “My roots have always been in the blues. It was what I gravitated towards growing up in Japan and listening to the radio: Ray Charles, Professor Longhair, and Fats Domino primarily.”

“From there, I just started absorbing it all,” she added. “Once you get started, the blues is like molasses; it gets into everything. I was playing piano then. I played drums after that in the eighth grade. … I played snare in a marching band … I didn’t discover the guitar until I got back to the States. I was studying art at a religious school in Tennessee. It wasn’t very good for me (chuckles). I moved back to Atlanta and took art classes at a local college. I bought a Brazilian guitar with nylon strings and everything started: playing coffee houses, steak houses and finally bars.”

“My friend Jeff Espina, also playing in the clubs, showed me how to strum flamenco style and make chords and taught me to sing “Guantanamera” with a Cuban accent. But at the root of everything I played was the blues. Buddy Moss, B.B., Alan Lomax’s collections. And do you remember Koerner, Ray & Glover? ”

Her familiarity with such a broad range of influences and her vividly virtuoso performances have evoked reverence from worldwide audiences for over 50 years. Does accepting a popular award after a lifelong career of courageous iconoclasm feel incongruous?

“I guess I’ve just been so far under the radar (over the radar – Corby), out of the box, you know, all my life, sometimes people don’t get what it is that I do. You know who taught me that lesson, about being an individual? Jimi Hendrix. He made me aware that what we each have to express is unique. There is no box. He and Richie Havens and Odetta and Dave Van Ronk and the people I knew in Greenwich Village were all about creating something vigorous and new. And I was listening to all of them. Richie wouldn’t teach me his tunings. He said I had to make up my own. And when I saw Randy California with his slide, I knew I had to start to play some of that. I didn’t have a slide, but I had a Coricidin D bottle. I loved slide guitar and tunings, and after seeing a Johnny Winter concert, I was off to the races! I played my acoustic through all sorts of illegal foot-pedals and finally began roaring away on an electric in 1970.”

After some time in Woodstock, where her band Fear Itself recorded an eponymous record, she returned to a solo format and recorded two significantly brilliant albums – Honky Tonk Angel and We The People – for Polydor that brought her to global attention.

“In the States, I couldn’t get arrested doing my music. So I played all those blues clubs across Canada, and they didn’t mind that the band leader was a woman playing lead guitar.”

She spent five years in Toronto, where she was exposed to the influence of reggae music, befriended Jeff Healey, and became a permanent Canadian citizen.

“When I moved to Toronto, I was five years clean and sober,” she said. “I started playing a lot in Canada, and I thought, ‘Why don’t I just move here?’ And I got in through the specialty segment that they had for artists, and I said, ‘I play here. I hire Canadian musicians. Why don’t you let me pay my taxes here?’ I lived there as a permanent resident, but there was no place to park in Toronto, so I came out to Calgary,” she laughed. “Actually, I tell people that, but I was driving back and forth across Canada, and there was a place in Calgary called Sparky’s, and I became a godmother to the owner’s son. So I said, ‘That’s it; I gotta stay.’”

Her current residency in Calgary will likely be permanent. Living in the centre of Canada’s country music scene, does she feel close to being inspired to do a country album?

“Light years away. A long time ago, I did a tune called ‘Tennessee Ridge Runner,’ and ‘I Don’t Wanna Play’ – they’re country – but I’m not really there. I loved old country. I enjoy Tim Hicks, Travis Tritt and Wynona Judd. I feel related to her, being born in Nashville. There are certainly offshoots that are good, but nowadays it just sounds like middle of the road.”

Ellen suffers from debilitating bouts of arthritis and a distaste for airplanes, and she laments that she finds fewer opportunities to perform because “Musical outlets are fewer since the festivals and paying venues are dwindling.”

But she is happy to spend her days driving a school bus and teaching guitar. She plays at the Blue Chair in Edmonton sometimes with Farley Scott but still prefers to play in the electric power trio format, adding Robbin Harris on drums.

“I like doin’ it with bass and drums … although there are still some things I can’t do on the electric, like my mid-eastern strumming. You probably settle down a little when you get older, but when I play, it’s all still there. There is a deep well of the music spirit that lives in me and it comes out when I play. And I think music is a force, and it exists whether we play it or not. I believe it’s very happy to find someone it can come out of. And when I play, and when I sing, I really think there’s something like cellular memory; I think a lot of people play with me through me, and a lot of people sing with me and through me. So it’s really a mystical experience for me on the inside. It comes out of different people in different ways. It comes out of the cumulative effect of years and years and centuries of human beings’ souls expressing themselves musically. Whattaya think?” she laughs.

I mention the deep feelings for African music that she expressed in her acceptance speech.

“That makes all the difference in the blues. I would never ever be able to play what I play if it weren’t for them,” she said. “All those people who were brought here against their wills and had such anguish. Sometimes I think that out of terrible things great beauty is born. There’s a guy who used to be the mayor of Compton who said, “Great pressure makes diamonds,” and I really had to bite my tongue not to write the list of old blues players I knew … so many of them were older, but I was lucky enough to be on the same bill with them … when I played the Mariposa Festival, Son House and his wife were on the ferry with me.”

With so much to contribute to the world, does Ellen ever feel a little stifled?

”I’m spending the summer trying to work further along on my autobiography, trying to get it past 1970. Sometimes I just slide open the window and sing on the bus. Music has always been my best friend for my whole life,” she chuckles.

A panoramic perspective of Ellen’s truly amazing range of accomplishments since settling out west is available on her website at http://www.ellenmcilwaine.com/biography.html, along with links to her passion for global music, women guitar players and access to her available discography. But there are, as yet, no scheduled performance dates for 2019, (she DID recently play a solo gig at Heritage Park as part of the Calgary Midwinter Bluesfest.)

Why I love listening to music on ...