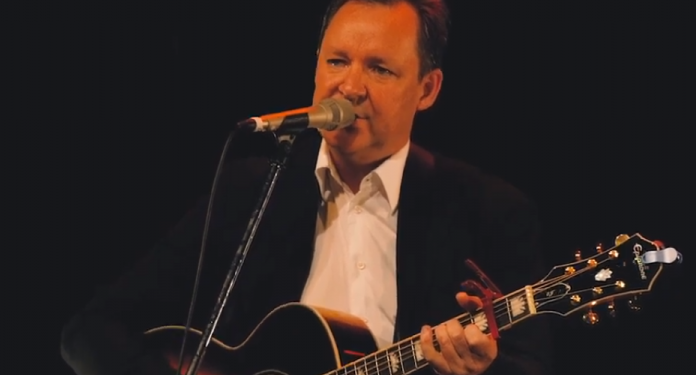 Folks, a lot of people are pretty impressed with Jay Aymar’s new album, Your Perfect Matador, and one of them is Roots Music Canada co-founder Andy Frank, my ol’ boss, who sang his praises of the album here last fall.

Now Jay has released a live video for the song “The Greatest Story Never Told,” which he recorded at the Al Green Theatre in Toronto.

You can see the video below, but first, here’s some of what Jay had to say about it.

Roots Music Canada: What was the catalyst to film this concert? Who shot the video?

Jay: It was the Toronto stop of our CD release for my latest release, Your Perfect Matador. I’ve been working with a new manager, Dan Greenwood, for the past few years. He mentioned how live concert videos are an essential way to communicate directly to artistic directors for future shows. Among his other clients is Amanda Martinez, who’s been quite successful with creating great live concert videos, so I agreed. Besides, I’ve never been one to embrace the conceptual art form of non-live videos! We hired the great Toronto videographer Jake Roels who did a full three-camera shoot. I’m happy with it.

Roots Music Canada: Why did you choose this song as the live video release?

Jay: This song is central to the album’s theme. Your Perfect Matador is a true song cycle, and I wrote all of the songs about the same woman. The themes in “The Greatest Story Never Told” resonate throughout the album: unrequited love, art, and protest.

Roots Music Canada: You say that this song is central to the overall theme of the album? Can you expand on that?

Jay: Yes. At one point in the song, the man says:


“I played your perfect matador

you saw red in everything

bloodied by the fight

we bled to black and white

and crawling we were crawling”

I’m conjuring up the image of a lovers’ quarrel. I’m the matador, and she’s the bull. Barcelona just happens to be my favourite city in the world as well (although Spain outlawed bullfighting in 2011). If you dissect the songs on this album, they play out with this push and pull of emotion – the dialectic. There is an ongoing dialogue between us that is central throughout.

Roots Music Canada: You say that this song deals with unrequited love. In the chorus you refer to her as “The Siren in the Sunset.” Do you mind explaining that?

Jay: That’s a very specific and personal reference. She was a great illustrator and part-time poet. When I first met her, we spent a few days hanging out on the beach. In a moment of watching her in the water against the sunset, I realized I was in love. I thought to myself, “If I was a painter, I would paint her in this moment and title it ‘The Siren in the Sunset,’ and it would be the one painting I would never sell.”

I’ve also long been intrigued with Homer’s Odyssey where the Sirens first appear. Odysseus is long known as one who is searching for his home. The central question is, “Is he running to or from?” I’ve often questioned this about my own odyssey – living as the itinerant traveler for so many years. It’s a central theme across all of my work. See recent album titles: “Halfway Home,” “Passing Through,” “Overtime,” etc … It’s pretty self-evident when you say them out loud together.

She was close to becoming my home, but as is often the case with us crazy musicians, the road took me away one too many times. THAT story is told in track four, “Us Wild Dogs.”

Roots Music Canada: Do you have plans to tour this album? Any festivals this year?

Jay: After 10 years of living on the road, performing over 120 shows a year, I told my manager I simply wanted to release this album in a series of theatre shows then take some time off. You know the old joke about how to kill Willie Nelson? Take him off the road. So yeah, I’m sure I’ll be back out there again in due time!

I’ve recently settled into a funky bachelor pad in downtown Toronto and have been decompressing for the winter. I’ve been reading a ton and hanging out with old friends from the music scene. It’s been glorious having my own box to come home to every night (as humble as it is). Part of me wonders whether I’ll ever tour like that again (barring a miracle). It’s getting harder to survive out there.

As for festivals, I have consistently applied to all of them every year over the past ten years, but I’ve only been accepted to Mariposa, Trout Forest and The Islands Folk Festival in Duncan, BC. I truly feel for the artistic directors who have to make these decisions on who to invite, as it’s an overwhelming task, and there are so many great artists to choose from. Of course I’d love to be invited to the dance, but I’m equally happy dancing where I choose to light my fire.