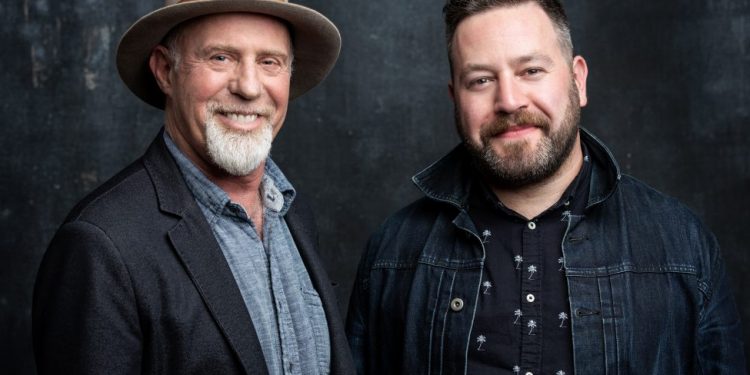 Two award-winning roots music giants are putting out their first album together on April 5.

Harry Manx and Steve Marriner (of MonkeyJunk) are calling their project Manx Marriner Mainline, and the album is titled Hell Bound for Heaven.

Produced by Harry and Steve, the album showcases the duo’s incredible talent and versatility throughout the 10 tracks: Harry on vocals, slide guitar, banjo, and his trademark Mohan Veena; Steve on vocals; electric, slide, baritone and 12-string guitars; harmonica; bass; Hammond organ and drums. Each contributed several songs to the disc’s repertoire, as well as covering some blues and gospel chestnuts, ranging from Charlie Patton’s “Rattlesnake Blues” and Reverend Gary Davis’ “Death Don’t Have No Mercy,” to Roebuck “Pops” Staples’ “Wish I Had Answered” and the traditional “This Little Light of Mine.” Joining the two on the recording sessions were Clayton Doley on Hammond organ and Moe Duella on drums, with background vocals supplied by three different aggregations, dubbed “The Gamblers,” “The Marrinaires” and “The Sahaja Singers.”

Harry and Steve share a musical chemistry that only comes from having spent many years, playing hundreds of shows and traveling countless miles on the road together. Both very

accomplished musicians in their own right, the two describe Hell Bound for Heaven as an elusive idea and blossomed into a beautiful reality. The two have shared hundreds of stages throughout their careers and have a friendship that has stood the test of time, but this is their debut collaboration on record. Hell Bound for Heaven can only be described as a true reflection of two phenomenal musicians joining forces to demonstrate their love of blues and gospel music.

“I’ve had the honor of knowing Steve Marriner for a long time,” Harry said about the genesis of their meeting. “It must have been around 2002 when he showed up at a club I was playing in Ottawa. He was with his father because he was only 16 and too young to drive (or drink). He asked me if he could sit in playing harmonica on a few tunes. I have to admit, I was taken aback by him because he looked so young and innocent. I remember being impressed at how nice a kid he was, and for a moment, I jokingly thought, ‘He’s too nice a kid to be playing the blues!’ Anyhow, I agreed to let him sit in for a song. When he started in on a solo, I was floored; so was the crowd. He played like he was channeling Sonny Boy Williamson or Little Walter. There was no insecurity or shyness – none of that; just pure belting out all the right notes with a power that didn’t fit his age. The crowd went nuts and stood up to applaud him. I was speechless. I even tried to hide the harmonica I had on my amp. No way I was going to play that around him!

“I hired him soon after to join me on tour. He tried to keep his school work going, but eventually he dropped it (with his parents’ blessings) and joined me full-time on the road. For the next five years, we toured Canada, the US, Europe and Australia. By the time he reached 21, he was a well-travelled blues master. Along the way, he also picked up the guitar, bass, drums, keyboards and killer vocals. I knew from the beginning that Steve was going to become a one-man blues storm, a legend in the blues scene. And he has. He’s probably won every award that you can win in Canada – and not just once, but time and time again. All this aside, I know him as a great person. When you listen to him sing or play, you’re listening to the man in the music. After many years of doing our own thing, we decided to team up again for this recording. What a joy. What an easy and effortless recording session. Easy is always right, and right is easy. We decided the theme for the recording would be gospel and blues. Hence we called it Hell Bound for Heaven. Moving from dark to light in the light of the blues; that’s our ongoing journey.”

“Working with Harry on Hell Bound for Heaven was the realization of something that has been coming for many years,” Steve said. “Before we were friends, I was a fan. I nearly wore his record Dog My Cat out! From the first time we met and played together nearly 20 years ago, Harry has been a mentor to me – a major influence. His unique synthesis of traditional blues and Indian classical music is so compelling, and his original songwriting is so profound. We’ve always had a special bond – musically and personally – and it’s been such a joy to see that bond take on the physical form in this new album. We share a deep appreciation for blues, spirituals and gospel. I think we’ve both always been interested in music that moves people. So, when Harry proposed that we make a blues and gospel record, of course I leapt at the chance.

“We both came into this recording with a couple songs written. I ended up writing two of mine, at least lyrically, after we began recording. I wanted to get a feel for the vibe before deciding what to say. It had been some time since we’d played together, and I wanted to see what it felt like, which direction it was going. Harry encouraged me to dig out some old ideas that had never been fully realized, so I did. I had one pretty cool progression that turned into “Hell Bound for Heaven,” the title track. It’s been very satisfying to watch a half-baked song with dust on it get some lovin’ and come out all shiny and new.

“The covers I selected are songs that I’ve been listening to for many years. ‘Death Don’t Have No Mercy’ is a Rev. Gary Davis song I first heard from the man who taught me to play harmonica. I’ve been listening to it almost as long as I’ve been playing music. I love what Harry added to our version – his iconic ‘Mysticssippi’ slide playing.

“‘Wish I Had Answered’ is a beauty of a Staples Singers song that I’ve always wanted to record. Pops Staples’ guitar sound is essentially the blueprint for my own approach to the guitar: big attack, heavy rhythm, with lots of tremolo and reverb. In fact, I first discovered their recordings while on tour with Harry in California, so there is some nostalgia there as well.”

Tom Russell – October in the Railroad ...