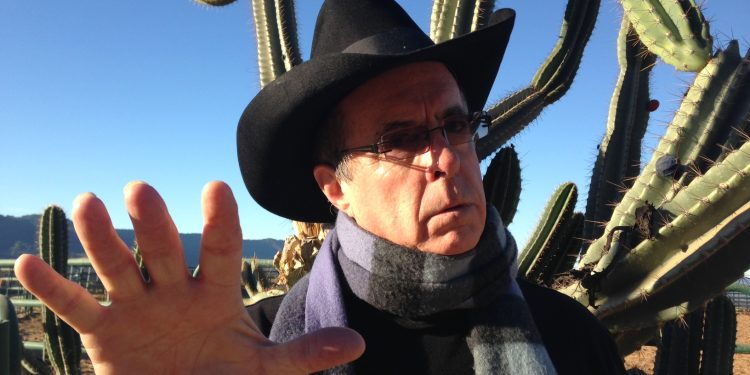 This particularly cool March morning found me in my room in the Peter Lougheed Hospital sitting in my wheelchair looking out the window at the distant Calgary skyline. The still-snow-covered Rocky Mountains off in the distance created a wonderful backdrop as I tried to find inspiration for some new poetry. I find that when contemplating large changes in my health and life, creative writing of any kind offers one of a few respites for a busy mind. As some of you are aware, I suffer from MS and recently my condition has deteriorated to a point where I am now waiting to get placed into a long-term care center in Calgary.

I was staring off towards the mountains in the distance when that familiar tone rang out on my cellphone. The familiar little chime letting me know there was a new article for me to read. The article was about Tom Russell’s latest release titled October in the Railroad Earth.

I was immediately transported back to a memory from my youth growing up in the Yukon Territory. My dad, my mother, my sister and my gangly awkward thirteen-year-old body were crammed into dad’s truck as we made our regular pilgrimage into Whitehorse for groceries and supplies. Somewhere along the way, the radio in the old rust-colored Ford extended cab truck crackled and came to life as the Whitehorse radio station blared from the speakers. The radio DJ introduced his next song as “Blue Wing” by the Tom Russell Band. We all listened intently to this wonderful new artist we had never heard before. As the song finished, my mother began to laugh uncontrollably.

SPOILER ALERT. In case you are unfamiliar with this song on Tom Russell’s album titled A Poor Man’s Dream released in 1989, “Blue Wing” gets paroled from Walla Walla state penitentiary, where he wrote a song with another cellmate and former blues singer named Little Willy John. The chorus goes:

And I fly away beyond these walls

Up above the clouds where the rain don’t fall

At the end of the song, Blue Wing dies, and from the inside of his coffin he begins singing “It’s dark in here; can’t see the sky.” The song is beautiful with a serious subject matter, but that twist at the end had my mother laughing for miles. Upon reaching Whitehorse, the first thing we had to do was search out a music store and purchase that album, which we listened to many times, not only on the long drive home, but for many years thereafter.

Tom Russell may be the greatest singer- songwriter you have never heard of – if in fact, you’re one of the people who has never heard of him. Wikipedia lists his album count at 42, not including singles, compilations and guest appearances.

I couldn’t wait to download the new album onto my phone, plug in my earbuds and start listening to October in the Railroad Earth.

The depth and breadth to which Tom Russell dives to reach his inspiration for songwriting is incredible. The album opens with the title track, “October in the Railroad Earth,” which is a song about the iconic and fatally troubled American poet Jack Kerouac. There are so many references to the young poet and his legendary works of poetry that unless you are well-versed in the tragic life of Kerouac you likely won’t understand the meaning behind the song. However, like all Tom Russell songs, you need not understand all the nuances to enjoy the great music.

Song number five on the album is titled “Red Oak Texas” and is another poignant tale of two twin brothers struggling with PTSD after serving in the military. British war poet Robert Graves features prominently in this song as well.

Tom Russell’s songwriting ties to Canada have always run deep through his albums over the years; his songwriting relationships with Ian and Sylvia Tyson and his many songs about his Canadian experiences are very well documented. On October in the Railroad Earth, the song “Hand Raised Wolverines” is Tom recounting a story from a past concert tour stop in Edmonton, AB at the maximum security prison.

Sometimes it concerns me when I turn on today’s radio and hear someone far less talented reaching some level of popularity and commercial success. It seems so unfair when so many exquisitely talented artists float along in relative, comparative obscurity. Now, that’s not to say that Tom Russell hasn’t reached certain pinnacles of success over the years. But he deserves so much more in my opinion. He deserves to be spoken of in the same circles as the most revered songwriters of his generation.

At 70 years old, Tom Russell’s voice sounds just as good, if not better, than it ever has. If you’ve ever wondered what a master singer-songwriter sounds like, I encourage you not only to pick up Tom Russell’s latest album, October in the Railroad Earth, but take a deep dive into his formidable discography. I promise you won’t be disappointed

See Tom Russell Live (details on all these shows are TBC):

David Kaufman once had a career as ...