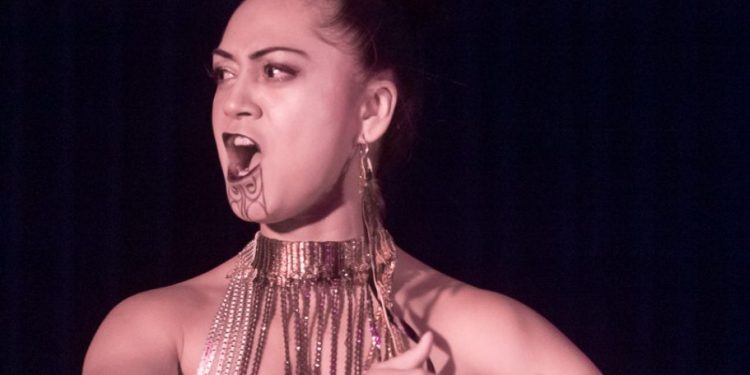 A dancer from Mama Mihirangi & the Mareikura

For four days and four nights, Folk Alliance International stormed the Fairmont Queen Elizabeth Hotel in Montreal, QC, and I was there. You couldn’t help but to experience all the feels: the highs and the lows, ultimately ensconced in a mix of awe, chaos, spirit and crazy.

Imagine rooms set up for performances from the lobby of the hotel through to the fifth floor; musicians attending from all over the world, playing official showcases from 4:00 p.m. To around 8:30 and private showcases from 10:00 p.m. through to until 3:30 a.m.; music for almost 12 hours, non-stop, for four days and nights (and mornings); close to 200 concerts happening at any given time. If your imagination is overwhelmed at the thought and your heart is palpitating just a little, then you are on the right track.

Last spring at Canadian Music Week, the seed was planted to attend FAI 2019 in Montreal. This outstanding (if a little overwhelming) music conference is usually held in the United States, so when I found out that Canada would be its 2019 home, I jumped at the chance to be there.

After a lengthy application process for an opportunity to play an official showcase, I was politely told “no.” So instead, I applied as a first timer and was even awarded a scholarship to help with the registration fee. I sent out a ton of emails and filled out more applications for a variety of non-official/private showcases and recieved a handful of yesses. YES! We music creators/bookers/managers LOVE a Yes. So there it was: a seed sprouted!

I have attended a variety of music festivals/conferences, but nothing could ever prepare a person for what could happen. Heading into something like this, you need an open heart, a fierce drive, and a thick skin. FAI developed an app so we could attempt making a schedule, a schedule for your daily workshops, panels, talks, inteviews etc., and a schedule for performances. Sticking to the daytime plan wasn’t so hard (on very little sleep, I might add), but sticking to the performance choices previously made was, at the best of times, quite difficult! One could very easily be swayed into a room by the sound of a harp, a voice, a familiar face or a fiddle (to name a few). Great surprises are so rare it seems, but not at Folk Alliance International. There were surprises around every corner.

Here are my TOP SEVENTEEN picks, in no particular order.

So there they are. I could not possibly pare my top picks down any further. As it is, I am missing way more greats on this list. To say I am grateful and honoured to have been privy to such a MASSIVE event doesn´t cut it. What a whirlwind of sights and sounds, a blast of musical chaos that will keep me fueled for quite some time. It was pure excitement and a true pleasure to be among such wonders. Hopefully you can take some time out of your busy schedules and have a listen to some of these new introductions?? Have fun while you are at it. I know I will.