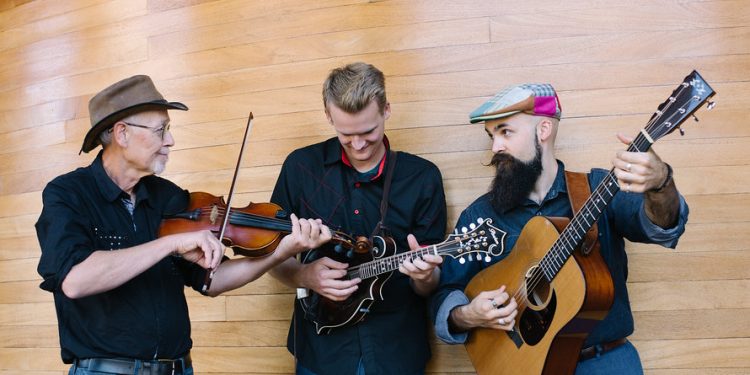 Honestly, these three Vermont guys should be honorary Canadians.

Pete Sutherland, Oliver Scanlon and Tristan Henderson together comprise Pete’s Posse, and they have so many Canadian connections it feels like the border shouldn’t even exist for them.

Take their festival gigs, for example. This is the second year they’ve been invited to perform at Festival Mémoire et Racines in Québec, and they also played at the Sutton Fiddle Festival last summer.

Their 2018 recording, The Conversation, bears Canadian credentials of all kinds. It is liberally sprinkled with the band’s fabulous arrangements of Québecois tunes.

The CD was mixed and mastered by Mark Busic at Studio du Chemin 4 in Joliette, QC, and fellow multi-instrumentalist Nicholas Williams, who lives not far from Sherbrooke, also played on many of the tracks. It is a stellar recording; very dynamic and fun listening.

Pete Sutherland has been across the border from Vermont to Québec so many times in his life, we feel sure the border crossing guys must know him well. For many years, Pete has played with some of the most prominent trad musicians in Québec.

Pete worked with people like André Marchand and the late Jean-Paul Loyer on the Détournement Majeur project and is a renowned name in traditional music circles throughout Québec.

Oliver and Tristan came to Pete through the Young Tradition Vermont music program, Pete spotting talent he wanted to work with pretty early on. All three are multi-talented multi instrumentalists to whom singing and songwriting come as easily as playing dynamic tunes as a dance band. With fiddles, keyboards, guitars, mandolin, jaw harp and banjo, together with great singing voices, the sound they make is fantastic. Pete’s Posse is just about the hottest band on the Contradance circuit this year.

Pete’s Posse is delighted to be playing some Toronto gigs in mid-April. A Beaches area house concert will be followed by a weekend at Toronto Contradance Spring Thaw dance weekend. You’ll be delighted to discover this band. Their music is new, vibrant and yet wholly traditional, all at the same time.