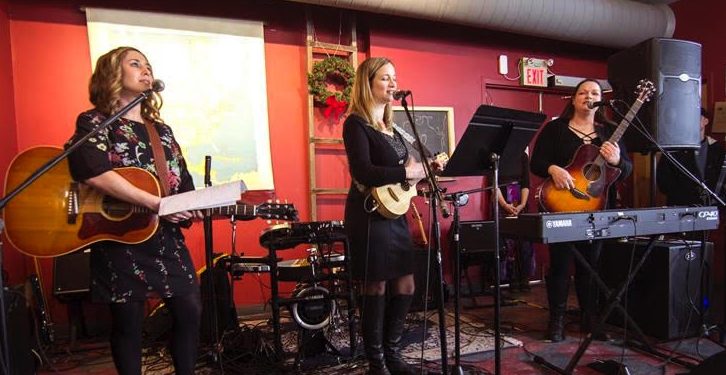 Today, in honour of International Women’s Day, we close our week of premieres on Roots Music Canada with a very special premiere: not just new songs, but new artists!  Doris Folkens brings us this report on the Hillside Festival’s songwriting course, and the songs it produced!

For International Women’s Day, the Hillside Festival is celebrating their Girls and  Guitars songwriting students who this year, for the first time, had the opportunity to record their original songs in a professional studio.
Since 2016, the Hillside Festival in Guelph, Ontario, has been running an annual songwriting course prior to their winter music festival. The course, taught by Hillside’s executive director, Marie Zimmerman and me, local singer/songwriter Doris Folkens, runs four consecutive Friday evenings. The resulting original songs are then performed by the students at the Girls and Guitars venue during the Hillside Inside festival in February.
The purpose of this project is to gradually change the face of the music industry, which is currently skewed approximately 70:30 in favour of men – both in terms of performers and in terms of industry people such as booking agents, tech crews, artistic directors, and critics.
Don’t let the alliteration of “Girls and Guitars” fool you.  This songwriting course isn’t just for teenagers or veteran writers. It’s for any aspiring female writer/performer with a desire for learning effective songwriting tools and methods in a supportive environment. All ages and abilities are allowed. The results of this initiative have been transformative. For most of the students this year, this was the first time they had written and performed an original song, let alone recorded it professionally.
The Hillside songwriting students’ Girls and Guitars venue at the Hillside Inside Festival on Feb. 9 was packed to the walls.  It took place at Planet Bean Coffee in downtown Guelph. Family, friends, co-workers, local musicians, and festival-goers packed into the venue to give the songwriting students (Sember Wood, Alaina Sampson, Michelle Munroe, Julie Tripp) their full support and attention. Their songs moved and inspired.
Female-identified musicians often write songs that are quite different from their male counterparts.  Case-in-point: this winter, the four students who signed up for the course wrote songs about discovering themselves falling short of an expectation, helping a friend through mental health problems, grieving the loss of fertility, and expressing gratitude to a partner.
Have a listen to their songs, recorded by Nick Zubeck at Arthur North Studios in Guelph. They are songs that salute female songwriters, whose voices and stories deserve to be heard.
If you are enjoying this content, please take a second to support Roots Music Canada on Patreon!