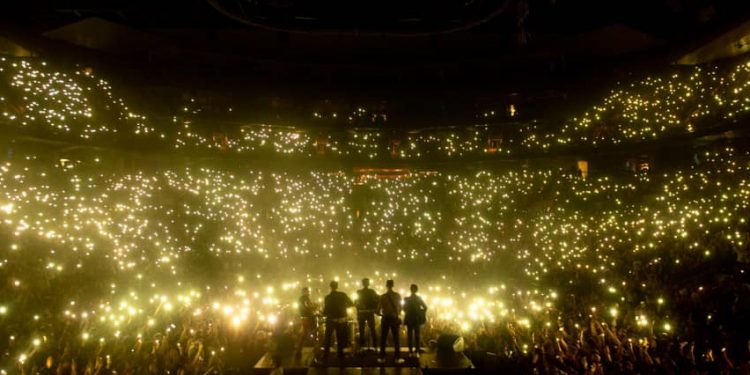 The best songwriters are invariably really smart, perceptive people with a grand passion for what they believe in. We’ve been keeping an ear out for a while now on what young Max Kerman has been up to, and for a guy still in his early 20s, he’s a really savvy, smart writer.

In case you spend your time completely in the folk music box and have never heard the name Max Kerman, let us tell you that he is the lead singer of Arkells, an alternative rock band that’s been taking the country by storm since 2006, when the members got together in Hamilton, Ont., while attending McMaster University. So far in their career, they’ve won multiple Juno awards, four gold records, and a devoted fan base.

Max got his musical start from his father, a dedicated fan of all kinds of music, who, as a young adult, was a radio DJ in Detroit in the 1960s. The young Max took The Beatles’ Abbey Road album to kindergarten for show and tell.

“I was obsessed with the Beatles,” Max said. “The first movie I ever saw was when my dad took me to see Help!” It’s not a bad way to start one’s musical training.

Max recalls that until he was 11 or 12 years old, he listened almost exclusively to Motown classics and the Beatles from his dad’s vinyl collection. But as he grew into his teenage years, the teeny bopper pop genre came to the forefront with acts like The Backstreet Boys and Britney Spears, and then later on in high school, the hip hop of the 90s era, Jay-Z and Kanye West caught his attention. As Max entered university, majoring in political science, he gravitated to acts like the Band, Robbie Robertson, Neil Young, Stevie Wonder, The Clash and Bruce Springsteen and played their songs in a cover band.

“All those great songs are human stories with a political bent,” said Max. “Great music is connective tissue. All the great pop music has great melodies, great rhythm and smart lyrics. The songs have real weight and meaning.”

His work in his band Arkells carries on this tradition in no small way. “You have to be able to have both rhythm and a message,” he said. “All the top songwriters write lyrics that have both weight and meaning. These are stories that matter.”

And whenever Max is stuck for inspiration, he refers to the book of poetry by Leonard Cohen that he keeps on his piano.

We all know that a lot of roots and folk music has strong political origins. Think Woody Guthrie and Pete Seeger, for example. Max Kerman writes those honest songs as well, songs that tell stories, have a message, and express their themes with passion and determination. “I’m really glad when artists can articulate themselves in a smart way,” he said. He likes songs that make you think, and Max writes songs that make us think as well.

Take Arkells’ hit record “People’s Champ,” for example. You know right from the first two opening lines who he is talking about:

“I’m looking for the People’s Champ,” the song says, “And It Ain’t You!” after talking about the highest office in America sitting vacant. It’s pointed, and it takes no prisoners and it’s a great song to sing along with in the giant arenas the Arkells are now filling.

Arkell’s new disc, Rally Cry, Max said, is a result of reading many books on mindfulness and trying to really live in the moment. And he listens intently to many other artists.

“I’m really glad,” he said, “when a songwriter can really articulate a grander societal issue in a stark way. It has motivated me to write songs like that.”

“Hearing something someone else wrote that’s so great,” he continued, “that if I could do even a fraction of that, how good would that be?” He talks about trying your best to appreciate what’s happening right in front of you, in the moment. The songs “Relentless” and “Eyes on the Prize” epitomize that aim.

Max’s songwriting process is really collaborative with his band mates. He starts out with what he calls the ‘bare bones’ of an idea and then calls on the rest of the guys to chime in. The others edit and add to what he started.

“They are all good writers themselves,” he said. “I definitely don’t think that I’m the smartest guy in the room!”

Max is a political science grad from McMaster University in Hamilton, Ont. His political engagement and awareness shows in so many of his songs. His song “American Scream” makes you really think about the problem of gun violence, and “Company Man” is about partisanship and former White House press secretary Sean Spicer who pretty much invented the concept of “alternative facts.”

“A good political song doesn’t need to hit you over the head with its message,” said Max. “It just makes you think a little bit.”

Perhaps the most interesting song on the Rally Cry album is “Relentless,” which was inspired by the dogged determination of Gord Downie, front man for the Tragically Hip, who, when faced with brain cancer, was determined, “like a dog with a bone,” to continue writing and touring to get the band’s message out.

The lyrics Max wrote for “Relentless” are completely evocative and are made even more so by the eternal rhythm of the song, drawn from Chicco’s “Sixolele Baba” from the Soweto compilation album South African Rhythm Riot. That song was brought to Max’s attention by his music-loving dad, Mike, who remains drawn to an eclectic mix of styles and rhythms. The world music roots of that song clearly drive Max’s lyrical message.

Max and the guys know by the audience response when they’ve got it right. They adore hearing fans singing along during their shows, and Max absolutely loves performing.

It’s writing a great hook in a song that keeps Max up at night, but he considers that stress, that drive to get it right, as a message that he really must like doing this.

“It’s a sign,” he said, “that if I allow songwriting to do this to me, it must be really important to me.”

We are looking forward to what Max and the other members of Arkells come up with in the years to come. It just might be that they will fill the massive void left by the Tragically Hip…

Arkells have just commenced a major international tour. While some of their venues are huge arenas, you can still catch them in some pretty intimate small venues….