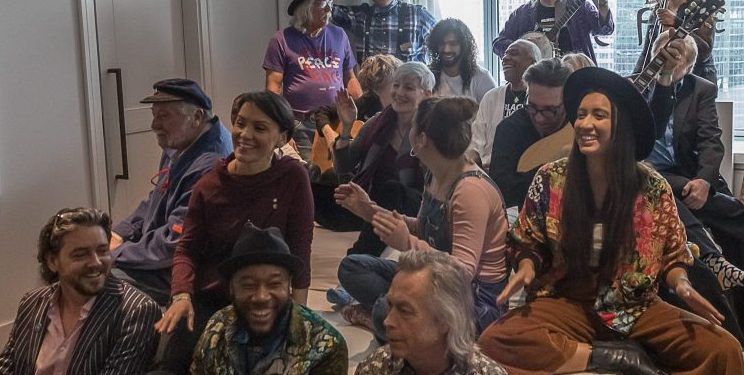 The bed-in at Folk Alliance 2019. Photo by Leonard Poole.

We didn’t go to bed til around 3 a.m. Saturday morning after a long night of watching music, so the sudden brightness in the hotel room around 8 felt oppressively early.

All the same, we couldn’t miss the historic “bed-in” planned for 9:30 that day, during which a number of artists attending the Folk Alliance International conference would crowd into the hotel room where John Lennon and Yoko Ono staged their historic bed-in for peace 50 years ago and reprise the event with a performance of “Give Peace a Chance.”

Fortunately, Roots Music Canada writer Elizabeth Szekeres pays far better attention to her email than I do and noticed that press were invited to actually BE in the room while this was taking place. Wait. Press? Hey! That’s us!

After debating the merits of attending a bed-in in my pajamas, I eventually settled on getting dressed in actual clothes and making myself look presentable.

We then joined a small gaggle of other scribes in the hallway outside room 1742, while the sound of the artists rehearsing behind the hallowed doors filled the hallway. 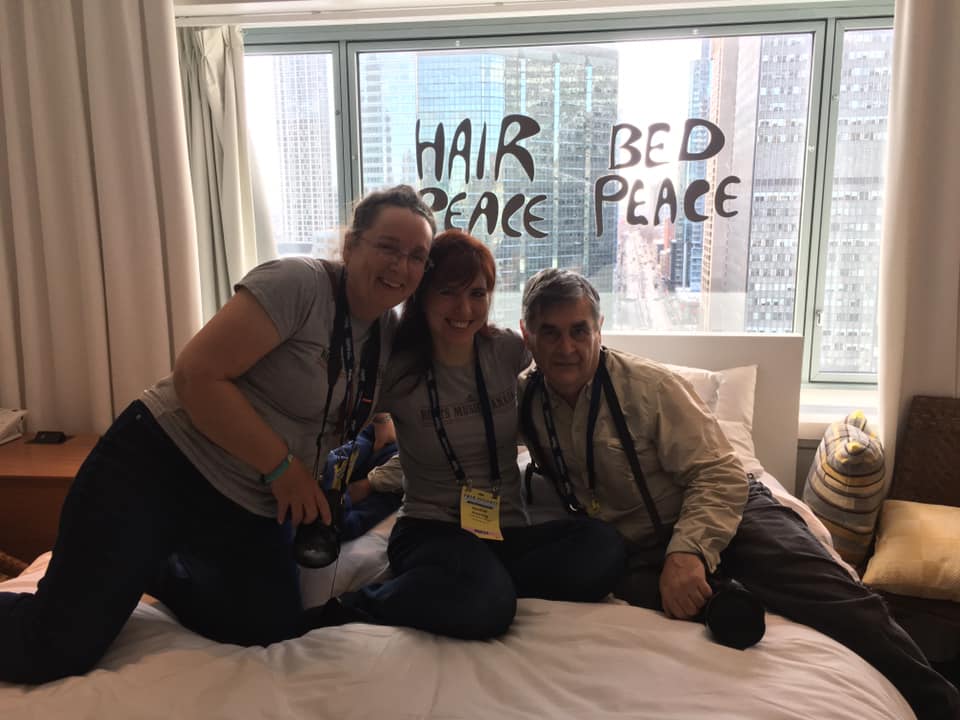 At around 9:20, Folk Alliance staff let us inside, and we all jostled for positions from which to photograph and live stream the proceedings.

A group of some 20 or so folkies, seemingly selected to represent as many facets of the community as possible, broke into song.

Veteran Canadian singer-songwriters Connie Kaldor and Stephen Fearing were there. So were renowned Inuit singer-songwriter Susan Aglukark, Carolina Chocolate Drops co-founder Dom Flemons, and Sonia Rutstein of the pioneering lesbian duo Disappear Fear, who still bills herself as “Sonia Disappear Fear” despite having essentially been a solo artist for – gosh, it’s got to be 20 years now.

Also on the bed: Reggie Harris of the folk-gospel duo Kim and Reggie Harris, powerhouse Toronto blues singer Shakura S’Aida, and of course, singer-songwriter Aengus Finnan, who is now the executive director of Folk Alliance International.

For approximately six minutes, they belted out the lyrics to the Lennon/Ono classic, and then … it was done.

Well, kind of. You didn’t expect a group of musicians would get together and sing just one song, did you? Of course not. When the official camera for the event had stopped rolling, Sonia led the crowd in a cover of “Imagine” followed by several covers of spiritual and gospel numbers, such as “Wade in the Water,” led by Reggie Harris, Dom Flemons and Shakura S’Aida. After another 15 minutes or so of music, the crowd dispersed for real.

“This was an interesting juxtaposition of many trails from my past and feeling that we’re also connected to roots from a long way back too,” Connie Kaldor told me after the event.

“And I was sitting there looking at these things about war and peace and John and Yoko and thinking a: ‘It’s a drag that we still have to sing this, and it’s still not a reality,’ and two: ‘at this time in the world when .. hate just seems to be popular … and there are refugees and people coming, and the world is at war … this must be shared, and this must be spread.’”

So far, the message has been spread to about 20,000 people judging by the viewing statistics on the Folk Alliance and Roots Music Canada Facebook pages. 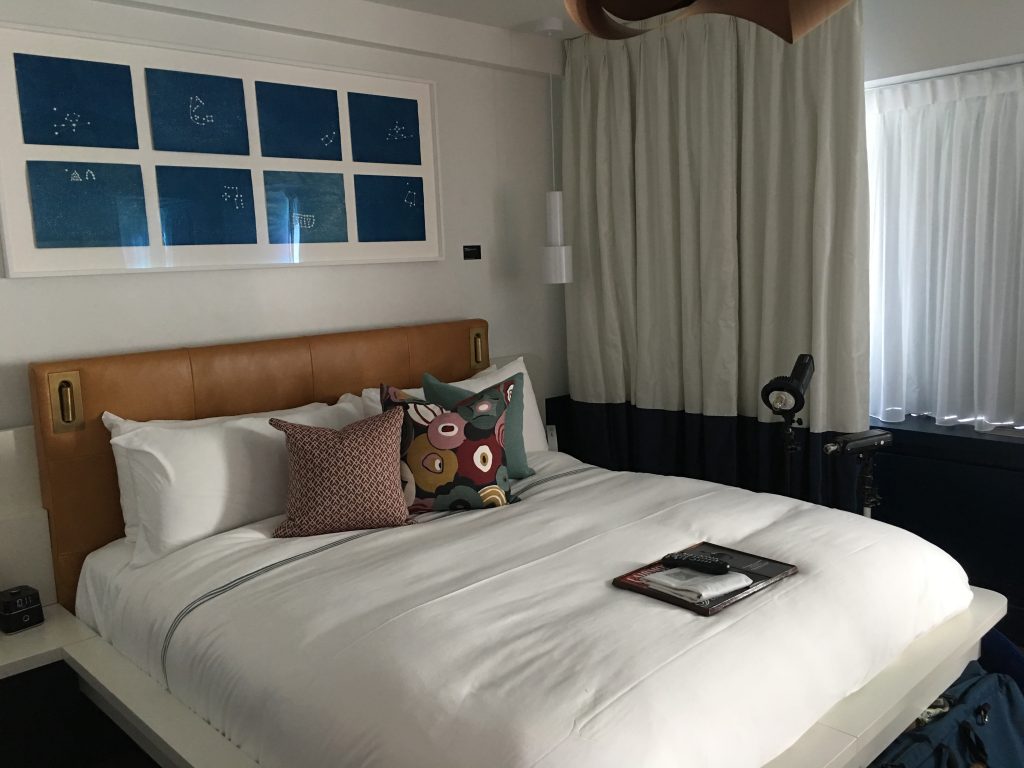 The bedroom in Suite John Lennon and Yoko Ono at the Fairmont Queen Elizabeth. Photo by Heather Kitching.

Conference attendees were invited to stream their own version of the song simultaneously using the hash tag #GiveFolkAChange” and around 15 groups of conference-goers took up the challenge, including the hip hop bluegrass ensemble Gangstagrass and the team from Vancouver’s Rogue Folk Club. Two other groups recorded protests against the stunt based on Lennon’s confessed physical abuse of women in his younger years.

Back in Suite John Lennon and Yoko Ono – as it’s officially christened – media and artists took an impromptu tour of the place before heading back to their own, significantly less opulent rooms. It’s been fully renovated with retro 1960s furniture, right down to the old rotary dial telephone, and decorated with Lennon-Ono memorabilia. The famous “Hair Peace” and “Bed Peace” words are stenciled on the window above the bed in the living area. The lyrics to “Give Peace a Chance” are embossed in the wallpaper. Photos of Lennon and Ono adorn the walls of the dining area, and a collection of cabinets along one wall opens to reveal short multimedia presentations about the couple. The suite also has an actual bedroom and two enormous bathrooms.

I wasn’t yet born when John and Yoko staged the bed-in for peace in 1969 – a fact I’m rather proud of since, these days, I’m too often the oldest person in the room with the longest memory for historical events. (How are there so many full-grown adults now who don’t remember Terry Fox?)

The bed-in is a piece of history rather than a point of nostalgia for me.

All the same, it was fun getting to watch this crowd of talented artists pay homage to a legendary musical moment. And yes, it was worth getting up at the ungodly hour of 8 a.m. for.

Folk Alliance: the business of trad ...