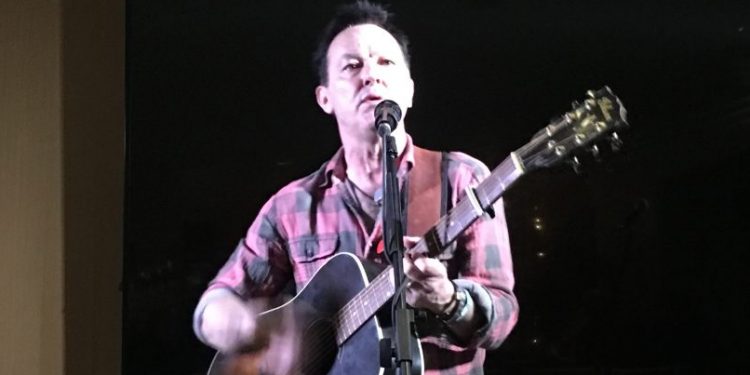 4:30 p.m.:  I admit it.  I can be shallow.  I HAVE been known to judge a book by its cover.  Case in point, the Polky Village Band has always struck me as kind of a hokey name, so I’m a little ambivalent about checking out the showcase by this Toronto band, founded by singer Ewelina Ferenc, who came to Canada from Poland three years ago.

But the sound emanating from the Gordon Lightfoot room immediately draws me in.  Ewelina is a powerful vocalist whose voice could peel wallpaper off walls, and her four-piece band of hammered dulcimer, accordion, fiddle and upright bass, anchored by Ewelina’s pounding drum beats, sounds like a party on wheels.

“Immigration is not an easy experience, but when you have guys like this around you that want to play your music, then immigration can’t seem too hard,” Ewelina tells the audience in a tone of tremendous gratitude and sincerity.

Oh Polky Village Band.  How can I not love you?

4:50 p.m. – Bill Bourne is tearing into a rockin’ rendition of “Stackerlee” in the Robbie Robertson room as his supergroup, Tricontinental, consisting of Bill, Lester Quitzau, and Madagascar Slim, attempts to showcase its way into a comeback tour of sorts, following the release of its new album, Dust Dance.

The sound guy isn’t doing them any favours, managing to make their deliciously nuanced blend of blues, folk and Malagsy music sound at once muddy and shrill compared with their impeccably engineered albums, but the many hoots and hollers from the crowd and the dancers at the side of the stage suggest the goodness is getting through.

“Buddhist poetry over music.  It’s the latest folk craze,”  Lester tells the audience before breaking into “Dust,” a particularly cool piece from the latest album marked by vocal lines that are mostly distorted to the point of being indecipherable – making the final lines imploring listeners to “enjoy your time” here on earth all the more powerful.

The trio closes the set with a gorgeous performance of “In the Silence,” which perfectly showcases their unique musical blend.  I leave the room in a pleasant trance.

5:50 p.m.:   Alex Millaire of Ottawa’s Moonfruits is adjusting an old-school table lamp on stage while Kaitlin Milroy plucks out a melody on Kalimba.  Then Kaitlin starts telling a spoken word story about an old busker, and Alex takes over to sing a moody, Cohenesque number accompanied by banjo and upright bass. Kaitlin adds flourishes of glockenspiel and stomps her foot hard on the wooden riser periodically for percussion.
The next piece, “Le Mien est le Votre,” is similarly moody, but punctuated with lovely harmonies and some cool vocalizations from Kaitlin.
The songs come from Moonfruits’ debut album, Ste-Quequepart, a concept album about a village dealing with hard times.

The innovation in this band reminds me a bit of Tragedy Ann, with whom Moonfruits have toured, and it leaves me thinking that the future of roots music is in good hands. I wasn’t particularly familiar with this band before checking them out, but I’m loving what they’re doing.  Two thumbs up, guys!

7:00 p.m. – I decide to stick around in the Gordon Lightfoot room and watch my fabulous former publicity clients The Fretless do their set.  This is the first time I’ve seen the new, low-estrogen, version of the band since Ivonne Hernandez left and Ben Plotnick took over, but the hormone shifts don’t seem to have changed much other than the ratio of facial to head hair.
The room is packed, and fellow Roots Music Canada writer Paul Corby, who has joined me in the audience, astutely points out that the audience-members are nearly all young.  I hadn’t noticed it, but I’ll be damned.  He’s right.  This Juno-winning ensemble of Berklee-trained string virtuosos who spent their youth competing against each other in traditional fiddle competitions has clearly succeeded at something many have failed at:  getting the younger generation to love and embrace traditional-style instrumental music.  The crowd rewards their flawless classical-trad fusion with rousing rounds of applause and a standing ovation at the end of the set.
8:00 p.m. – What am I going to do now?  Hurry up, Heather.  Make up your mind.  The trouble with 20-minute showcases is you can miss a pile of great stuff while you’re trying to decide what to go see.  Stephen Fearing‘s manager had invited me to go check him out because he’s playing with a group of Danish musicians called the Sentimentals, so I decide to go there.  You really can’t go wrong with Stephen, right?  Right.  I only manage to catch about a song and a half, but it’s time well-spent, as time at a Stephen show typically is.
12:10 p.m. – I’m sitting on the floor in the showcase suite where Elage Diouf is performing, because there are no seats left. This is the first time I’ve ever seen a live performance by Elage, who rose to prominence in Quebec by collaborating with the seminal Quebecois group Les Colocs, and who earned three Felix nominations for duo projects with his brother.  Elage, who is originally from Senegal, sings mostly in Wolof and incorporates a variety of musical styles into his work.  I can’t see his guitarist because his back is to the audience due to the space limitations of the room, but he’s filling the air with all kinds of jazz and funk riffs, at one point scatting along with his notes.  The highlight of the set is Elage’s original number, “Mandela,” a tribute to the beloved activist and politician, which is featured on his latest album Melokáane.  He closes the showcase with a few bars of Bob Marley’s “Get Up, Stand Up,” which the audience ends up singing lead on.
12:35 p.m. – Jimmy Rankin is opening his set with “North Country,” and I’m having a nostalgia moment for the old Rankin Family recordings – while simultaneously thinking how generous Jimmy is as a performer to give the audience their guilty pleasures both at the start, and ultimately also at the end, of his set.
In the middle, he plays songs from his new, Joel Plaskett-produced homecoming record Moving East, including a moving number called “These Roads,” which he explains derives from a conversation with a friend about all the people they know who have died in car accidents on Cape Breton.  Of course, one cannot hear this without thinking of Jimmy’s late brother, John Morris, who was lost in a car accident on the island in 2000.
“These roads are murdering bastards / They’ll drive you away,” he sings.  “They’ll make you humble and weep, bargain and pray / And they’re littered with crosses and candles and tolls to pay / These roads are murdering bastards / I’ll quit them someday.”
As I listen to Jimmy, I can’t help but marvel at his voice.  So often on Rankin Family recordings it was Heather, Cookie and Raylene’s sweet, pure-as-the-ocean-breeze vocals up front – at least it was on the hits. Apparently, I had failed to notice just what a remarkable instrument Jimmy possesses.
His performance of “These Roads” is so expressive, his voice shifting between angry and mournful, that I can feel the hairs on my arms standing on end. When he launches into the next song, “Highlander,” inspired by the resurgence of Celtic culture on Cape Breton, he gives it the full-throated rock’n roll treatment while Jamie Robinson tears up the stage on mandolin.
He ends the set with another Rankins classic, “Movin’ On.”
I wish he wasn’t.  I could watch him for hours.
1:45 a.m.:  I’m trying to decide if it would be overwrought to compare Celeigh Cardinal to a young Aretha Franklin. But seriously.  That voice!  She belts out soulful passages with full-throated abandon, she slips into a bluesy, raunchy growl with ease, and she makes swooping between the two sound effortless.
Audience members at the showcase – including Juno-winning singer-songwriter Leela Gilday and her brother, Jay – are singing and harmonizing along with her on “There Ain’t No Way,” a gorgeous tribute to a romantic partner she said helped her heal.
On stage, Celeigh is that fun, confident, extrovert at the party, who makes entertaining look easy.  Her song intros reveal both a history of heartbreak and the kind of tremendous emotional intelligence needed to process them into these unique takes on love (It turns out, that’s not an oxymoron).  In the span of her 20 minute set, she performs a song about accepting a relationship with all of its flaws and limitations (“There Are Some Things We Will Never Do”); the aforementioned love song to a lover she said helped her heal; and a kick ass blues number, which she wrote for a competition, inviting a lover to be the kind of loyal, devoted companion we all dream of (“Would You be My Dog?”).
Celeigh won last year’s Western Canadian Music Award for Indigenous Artist of the Year.  She has a new record coming in May.
I absolutely cannot wait to hear more from her. 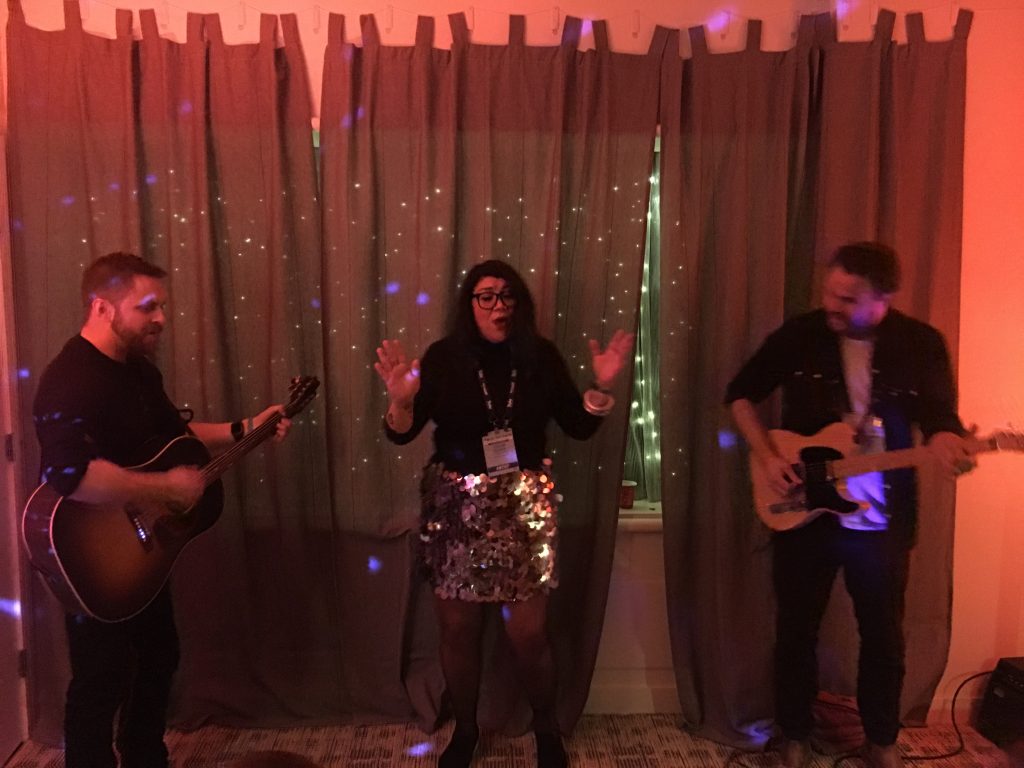