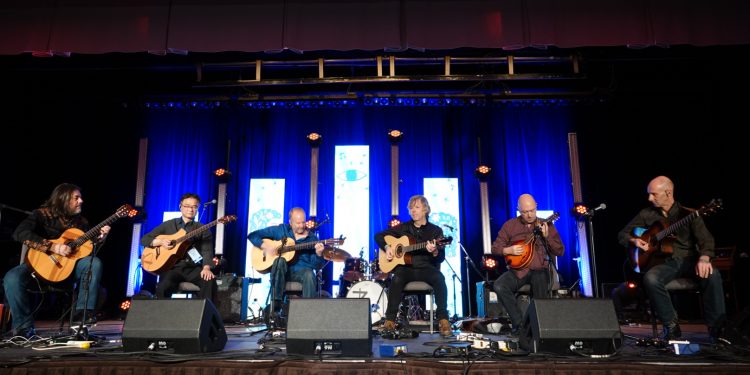 The Montreal and California Guitar Trios. Photo by Elizabeth Szekeres.

The day dawned early after a bedtime of past 2 a.m. on Friday night. A late night email invited us to attend the Bed In at 9:20 a.m. in the room once occupied by John Lennon and Yoko Ono in 1969, so we rose early.

Selected musicians from this year’s Folk Alliance International conference had been invited to re-create the recording of “Give Peace a Chance,” which was created here 50 years ago, and, as press members covering this conference, we were delighted to have been invited to witness and document the event.

Twenty or so musicians sat on the bed and sang “Give Peace a Chance,” which was live streamed to the public, followed by a selection of other songs of social consciousness. It was electric being in that suite of rooms that bears a whole lot of history in the form of historical multimedia displays and Lennon’s art on the subject of peace. Being a part of the re-creation was magical and brought full circle our memories of the actual event in 1969, but it was poignant indeed that so many of the issues that faced the world back then are still with us today. Sadly, not much has changed.

The afternoon conference music showcases started off with a bang as De Temps Antan took to the stage in the Joni Mitchell Room where the Folquébec showcases were held today.

De Temps Antan is a powerhouse trio of Quebec folk musicians. Members Pierre-Luc Dupuis, Eric Beaudry and David Boulanger gave us a wall of sound from fiddles, feet, guitar, bouzouki, harmonicas and accordions. The band brings music from long ago – from that time to this, but also brings new original tunes and songs to us with dynamic arrangements that just make you want to get up and dance. There’s stomp box beat, driving foot percussion, and even the use of the fiddle harmonics for percussive effects, proving that the fiddle is just as much a percussion instrument as it is a melody instrument. The joy of playing together was very much in evidence with this band as they shared grins and glances across the stage during their performance. 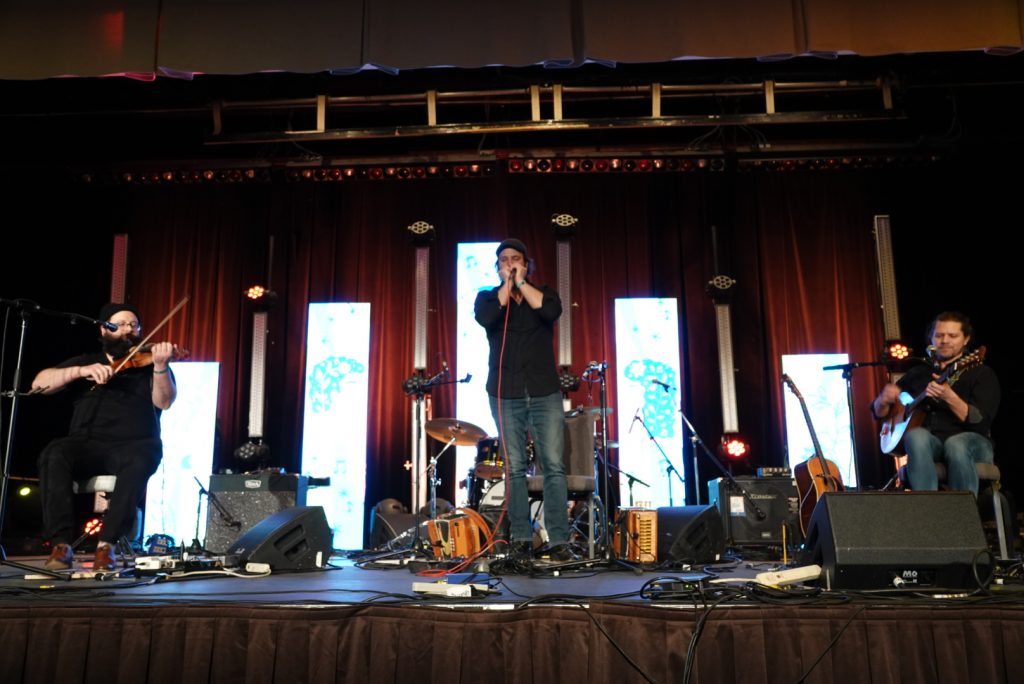 Following that great performance, we had another. Two bands combined forces to make a superb showcase: The Montreal Guitar Trio and the California Guitar Trio. These were six virtuoso guitarists on stage together, combining their formidable talents. After ten years of playing concerts together, these guys really know how to put on a great showcase. Elements of flamenco, tango and gypsy music came together in an adaptation of contemporary pop music. A melody from Brittany pitted a single mandolin against five guitars all playing off each other in a complicated arrangement of harmonies. Radiohead’s “Weird Fishes” was beautifully arranged in a slow acoustic version that lets you appreciate the sheer joy of the terrific composition. It was a layered confection under the understated words which transformed it into a gorgeous, lyrical piece. All in all, it was a terrific showcase for these six musicians who released their new CD yesterday. 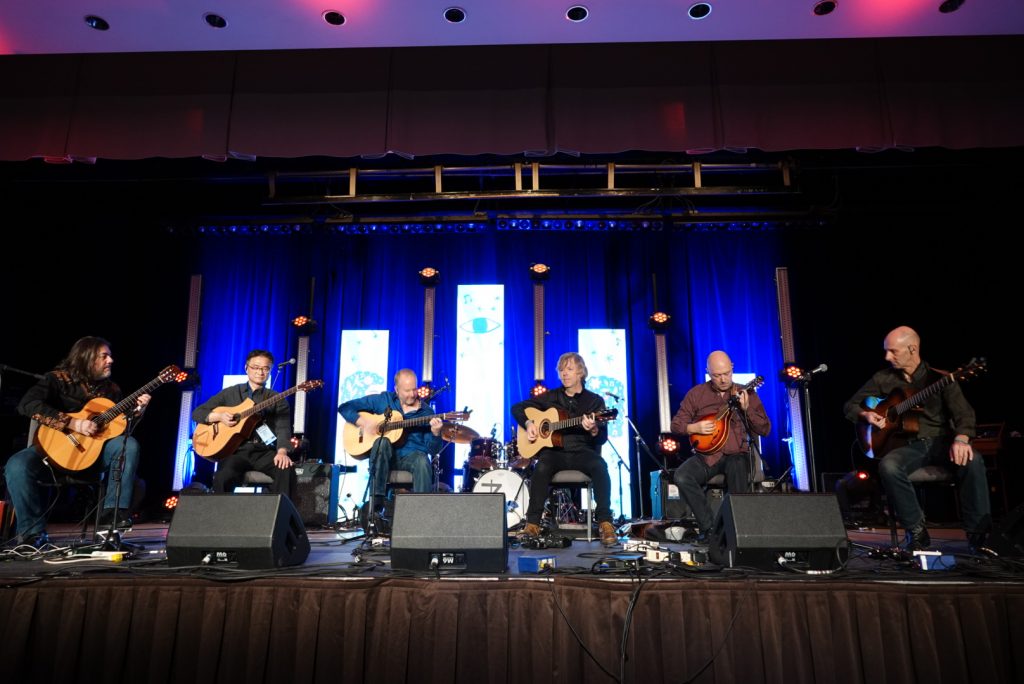 The Montreal and California Guitar Trios. Photo by Elizabeth Szekeres.

The Yves Lambert Trio was up next. Yves Lambert is a venerated member of the folk community in Québec. He was one of the founders of the original La Bottine Souriante and has carried on his career as a singer and accordion player for many years in many bands. In this incarnation, he is playing with Tommy Gauthier (fiddle/mandolin) and Olivier Rondeau (guitar). Those two younger musicians bring 21st century musical technology together with Yves’ formidable skills as an accordionist and singer. These three have played together for 15 years now, and their range is huge. From traditional call-and-response singing to Cajun numbers, Scottish strathspeys and Québecois reels, it seems they can play whatever they want and keep their audiences on their toes. You never know what might be coming next from this awesome band. 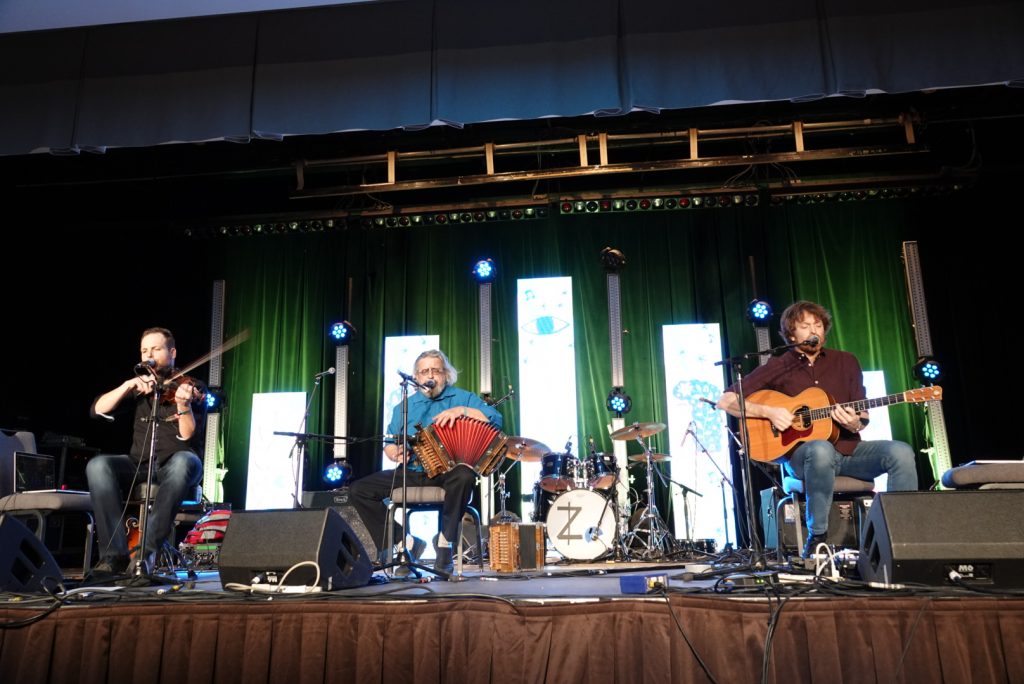 Les Poules à Colin took the stage next. This quintet of young people has been touring the world in the past few years. All the members are the offspring of prominent and well-respected members of the Québecois folk music community, so they have grown up with traditional music under their skins. But instead of reprising the work of their parents, Béa, Colin, Sarah, Eleanor and Marie are taking the music above and beyond to a new place in the folk/rock firmament. They are composing new music; sometimes their original songs are sombre, reflective of the angst of young adulthood, but in this set, they finished up with the very upbeat “Breakfast at the Méthés.” Very fun. 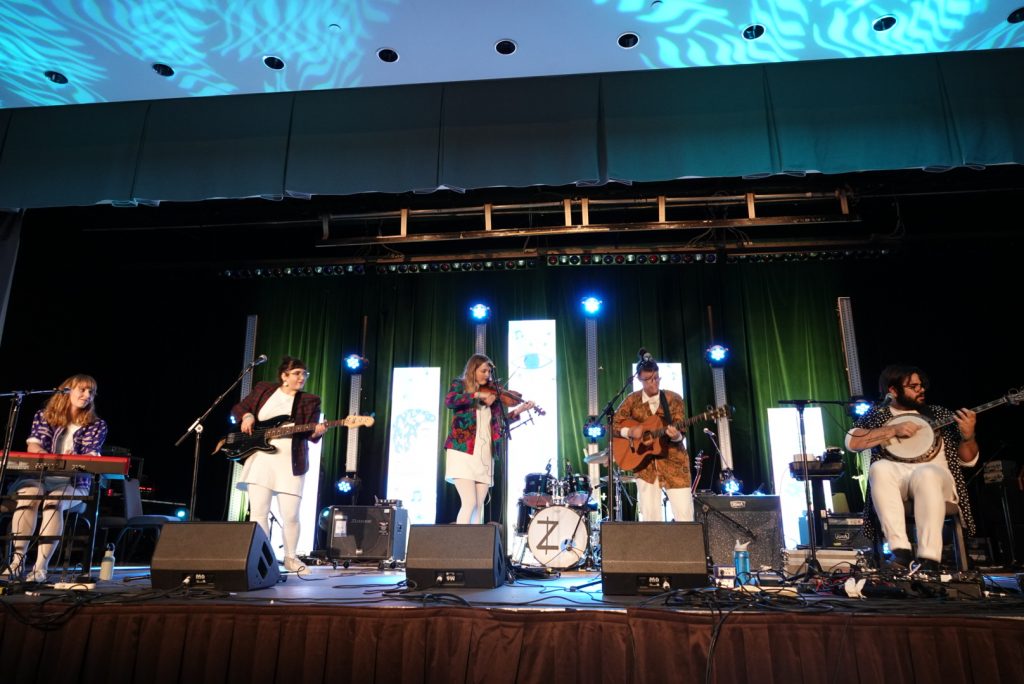 Mélisande [Electrotrad] is a foursome comprised of singer Mélisande Gélinas, her partner, Alexandre de Grosbois-Garand, fiddler David Boulanger, drummer Alexis Martin and dancer Sonic Boom. The band is hauling the folk and roots music of Québec right into the 22nd century with its electronic approach. Sequencer and synthesizers are employed to great effect, as well as flute, keyboards, banjo, fiddle and jaw harp. Breakdancer Sonic Boom totally stole the show, while the sultry voice of Mélisande cut straight to the heart. The showcase borrowed a lot from the disco era in this new way of presenting trad music. 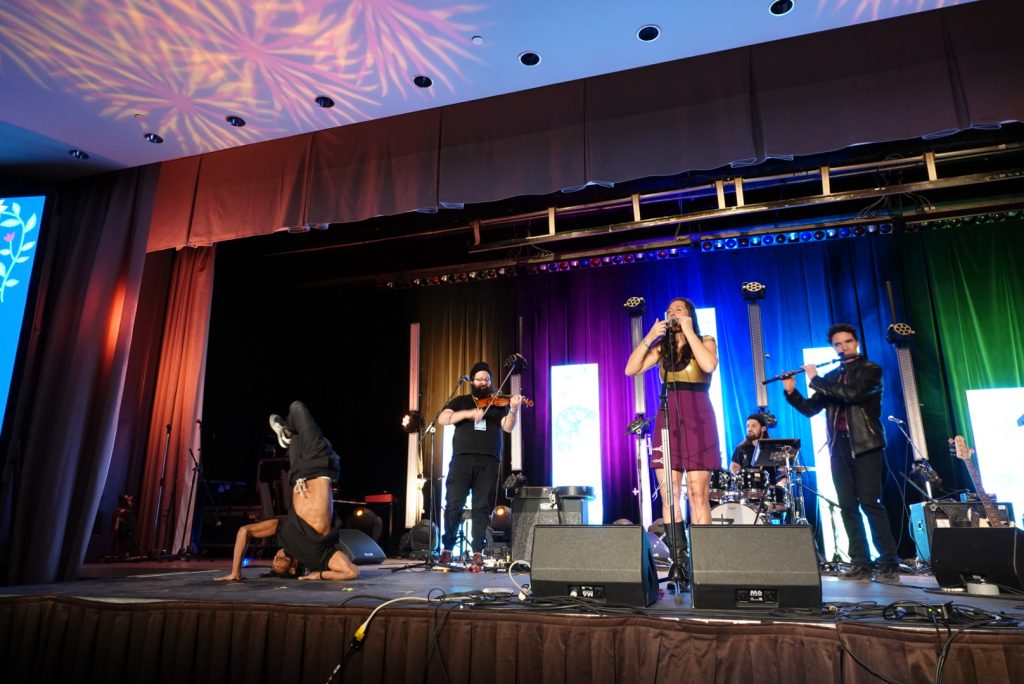 Seventeen years of touring has resulted in an explosive show by Le Vent Du Nord, who held one of the last official showcase blocks of the day. They are polished, highly accomplished and audience pleasing. The room was filled to capacity, and the audience loved every minute of this showcase. It’s clear that this band loves to play to their audiences. This time, the band members were showcasing their new album, released this week, which features stellar fiddler André Brunet, a new addition to this venerable band. We must say, André fits in like he always belonged there, between his brother Rejean, the bass and accordion player, and Nicolas Boulerice, keyboards and vielle à roue. André’s presence also signals new possibilities for arrangements with fellow fiddler Olivier Demers and fretted string player Simon Beaudry. The new album is a really promising release for this band, possibly the most exciting band on the festival circuit today. Their showcase was advance warning of breathtaking performances to come at festivals this year and next. 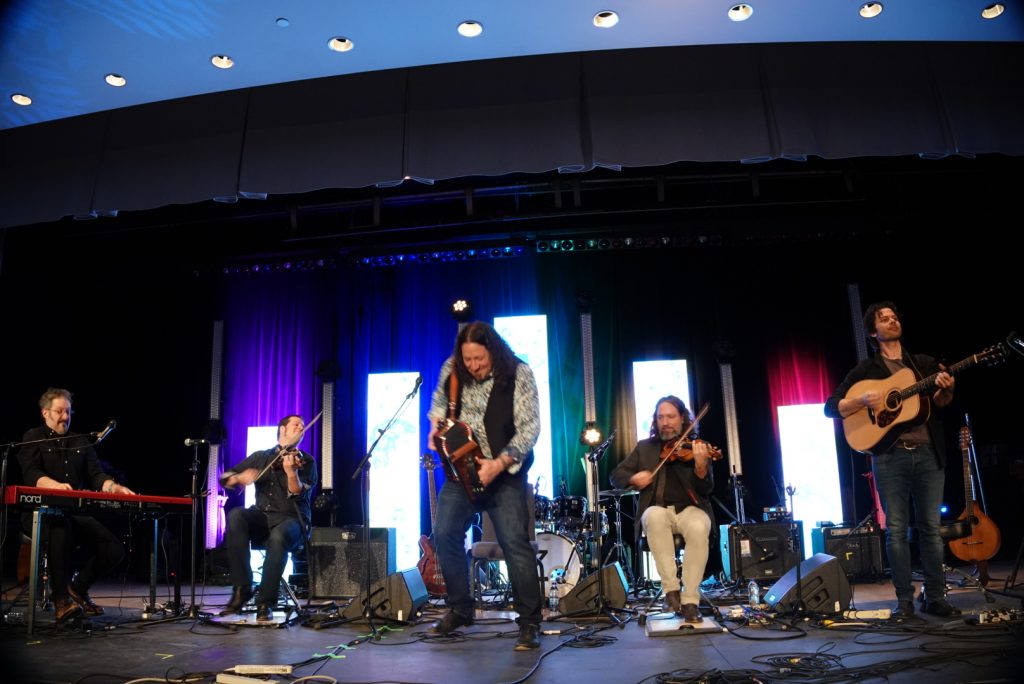