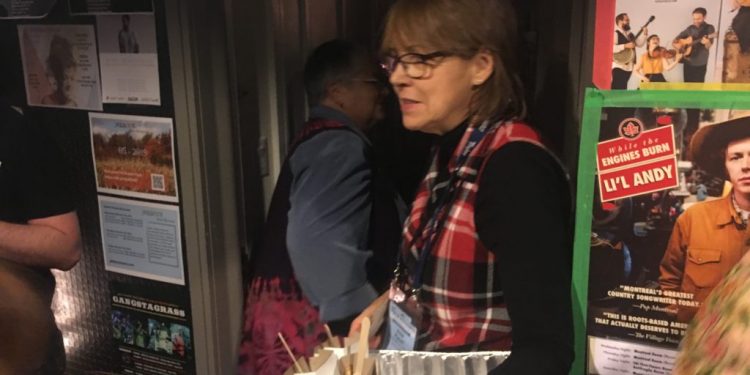 A volunteer hands out poutine to try and entice delegates into Connie Kaldor's showcase suite at Folk Alliance. Photo by Heather Kitching.

Picture something between a circus and a tornado.  But with banjos.  Merrily it coalesced.  The Friday night Folk Alliance was in town.  Instead of jugglers, lanky lads and lasses in po’boy caps, vests and loud pants hung with fretted instruments and djembes, swayed through the hallways of the Hotel Fairmont in twos and threes, rolling their shoulders under the weight and inspiration of the need to attract favourable notice and valid business cards.

Instead of clowns, bearded men in logo t-shirts and lanyards hoisted cameras and lugged free CDs from room to room and scrambled into intimate elevators for a thrill ride to the next level of folk immersion.  Everywhere there was song and celebration.  And posters – down to here and up to there, in stairwells and on windowsills and stretched along corridor floors.  The concept of a paper-free conference had gone up in a recycled cloud.

Instead of ponies – lots of ponies – there were performers. Galore.  More than four pages worth in the pocket guide, each three columns wide in small type.  Chances are, you could end up in a small room with a giant talent at a wee small hour.  All night long, spirited performers engorged spaces suited for little more than a suitcase and guitar, and full scale rocking ensembles played to audiences that might have even discouraged a poet and a one-man band.

In the perennial rush hour of the hallways, hug time and group kisses, upright basses, drum cases and a moose named Gordy obstructed traffic flow and encouraged a boisterous carnival-style rowdyism that was all too clearly audible to un-mic’d singers and their fans in their semi-private showcases.

Thinking of all of the rehearsals, travel and print bills that this conference has demanded, as well as the obligations anticipated in fulfilling the commercial fellowships that will arise from successful schmoozes herein, it can frustrate the enthusiasm of musicians and presenters alike. But the joy of discovery, suspense, surprise and transcending the storm with a heartfelt conversation, a soul-vibrating performance or a chance to be in a petting zoo situation with one of your heroes of song will pay off with chills of memory and a joy in familiarity with elephants long after the circus has moved on.

(Next year in New Orleans)
If you are enjoying this content, please take a second to support Roots Music Canada on Patreon!