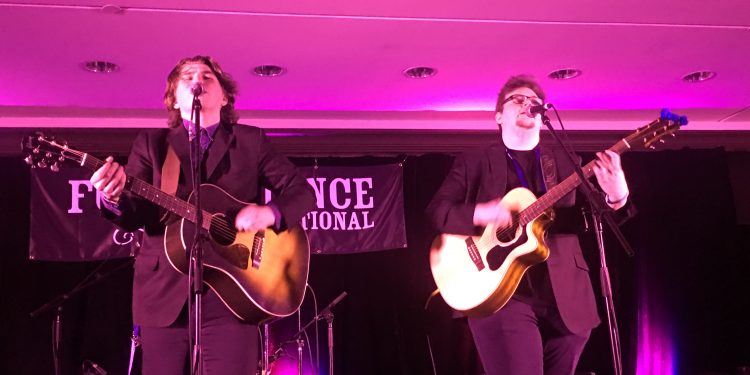 4:55 – “Are there any other introverts in the room?” asks PEI artist Meaghan Blanchard a song or two into her official showcase set in the Canadian Music East Coast Style suite.  The comment seems to reflect the tranquil and subdued tone of her performance.

Meaghan is playing solo with guitar, and she’s telling charming, folksy stories about her berry-picking, late-to-procreate great grandmother and the bureaucrat who recently described her as a cross between Dolly Parton and Anne of Green Gables.  After a frenetic day of meetings and schmoozing, it takes time to settle into the coffeehouse-style intimacy of her showcase.
Meaghan winces at the Anne-meets-Dolly description of her, but it’s not hard to see where her hapless bureaucrat was coming from.  She’s got a sweet, girlish voice that easily compares to Dolly’s, and her past material definitely crossed over into country territory, though her new album, the Great Escape, is more in the indie folk vein. Also, she does have a kind of Anne of Green Gables wholesomeness about her.  And I’m not just basing that on her public image.  I worked with Meaghan as her publicist for a while, and she really is that lovely.
Consequently, when she announces she’s going to close her set with a cover of Richard Thompson’s “Vincent Black Lightening,” I get a little worried.  This is so not at Meaghan Blanchard kind of song – or so I thought.  Turns out, I don’t even have words for the pure awesomeness that happened next.  Meaghan took that song, made it her own, made me hear it in a whole new way, and made me believe that this is how the song was always meant to be sung.
If Meaghan’s original songs ever approach the calibre of Richard Thompson’s, she’ll be monstrously huge.
5:00 p.m.: If the theme of yesterday’s showcase was “Here’s the greatest stuff we have on the circuit right now.  We dare you not to love us,” then the theme of today’s line-up is more along the lines of, “Here are the artists we’re trying to build audiences for.  We hope you love them as much as we do.”
Mo Kenney is on stage now, and she just told the audience she kicked things off with her meanest song to see if we’d still like her afterwards.  Everyone seems to still be here, so things are looking good for Mo.  She tells us her next song is a happy one, but it sounds for all the world like a break-up song to me.
“Here’s the happy part,” she says, then starts whistling a bridge. 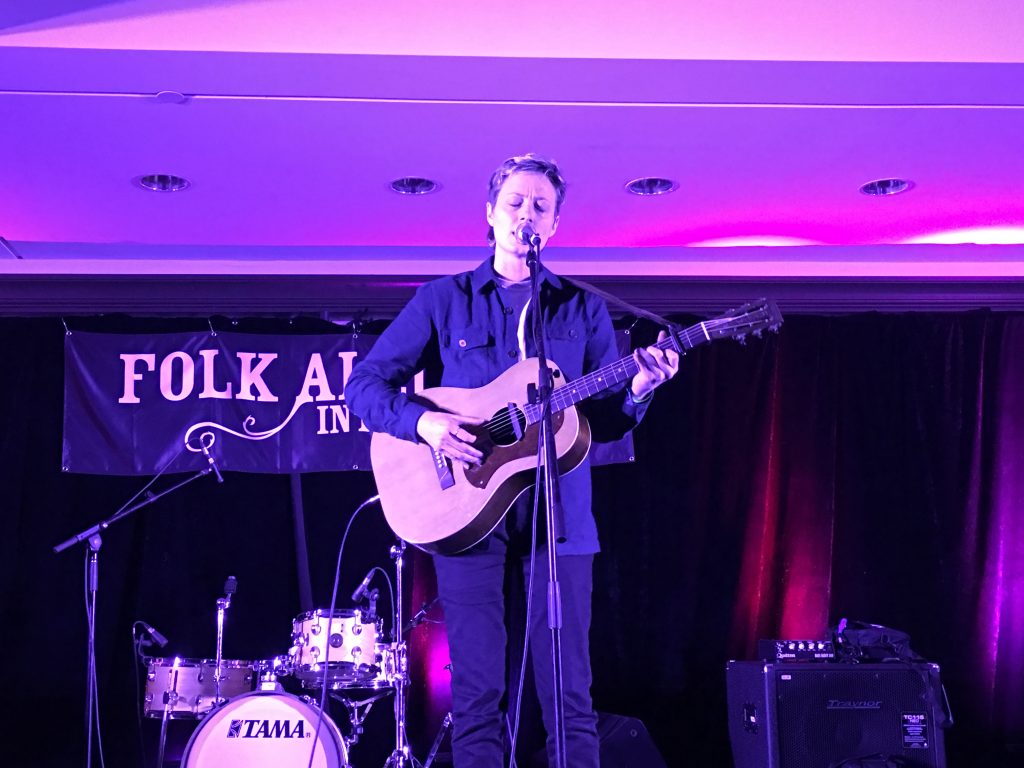 She follows this up with “Unglued” from her latest album and an audience favourite, “Sucker,” which draws cheers from the crowd.  Then she debuts a new song that doesn’t even have a name yet.  It’s rhythmic and haunting, and I can imagine it all dressed up in wet, indie folk production.
All in all, I find Mo enchanting and entertaining, and it’s not hard to see what Joel Plaskett – who arguably discovered her – saw in her.
7:45 p.m. – I’m just back from one of those infamous Folk Alliance “quick drinks” that ends up going on for two hours.  Earle and Coffin have just started tearing up the room with a rawkin (that’s a cross between raw and rockin’) rendition of “Stranger Blues.”  Strangely there are not that many people here.  Where are you, people?  What’s wrong with you? Don’t you know what you’re missing here?
“As you can see, we’re not that old. We don’t have many troubles, so who knows why we’re playing the blues?” Joe Coffin tells the audience to much laughter. When they try to write something, he explains, they can’t really draw on life experience because nothing bad has really happened to them, so often the songs end up being about nothing. “Which is ok,” he adds.
But man, the moment Joe and his musical partner, Nick Earle, get some of that life experience behind them, they’re going to be killer, because they sure do have all the other component parts of great blues in spades.  Nick is a monster finger picker and bottleneck guitarist with a vocal style that – for reasons I can’t quite put my finger on – reminds me of young Colin James.  His solo on their new original song “It’s a Shame” was insane.  Joe is a formidable rhythm player with some decent finger picking skills and a powerful voice of his own.  And both men are funny as all get out on stage.
Speaking of funny, I have to get up to the hotel room and take the moose for a walk before he breaks something.
I’ll post some photos on the Roots Music Canada Instagram. 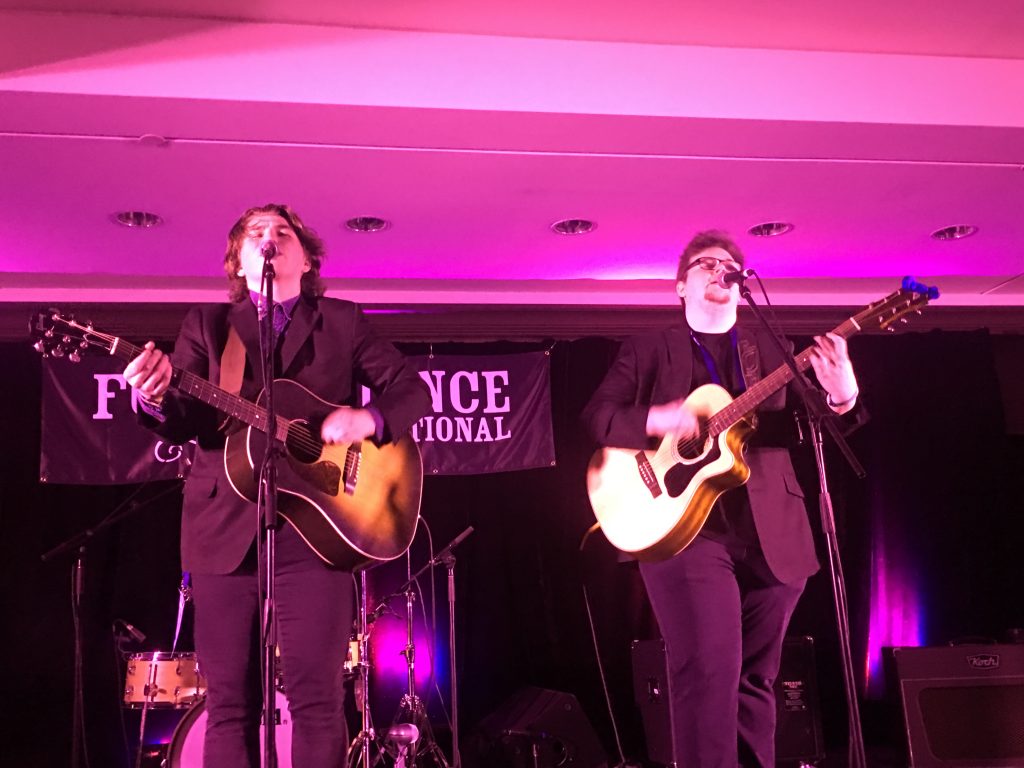 12:15 p.m.:  Steph Cameron is performing in room 503 – I think.  I can’t read these small numbers on the program without my glasses.  Steph says the song she’s about to sing is about the mixture of strength and vulnerability she felt hitchhiking back and forth between B.C. and Saskatchewan.  She wrote the next song, “Wishing Well,” based on a love story she heard while working in Vancouver’s Downtown Eastside.  And she wrote the next one, “Goodbye Molly,” to the rhythm of the rain striking the metal roof of the shack she was living in somewhere out in the forest.
Her set’s not even over, and I’m already convinced my life is boring and meaningless, and I need to seriously do something to make it more interesting.
But in all seriousness, Steph live sounds like Steph on record.  She has a beautiful girlish voice the completely belies the counterculture lifestyle she leads, while her songs transform those experiences into polished gems of wisdom and insight.  It’s beautiful stuff, and I’m glad to have finally had a chance to see her live, never mind in the intimate confines of a hotel room.
1:30 a.m.:  “Hello 1:30 in the morning!” shouts Tom Power of the Dardanelles, with more than a hint of a Newfoundland brogue that’s unnoticeable during his broadcasts as the host of CBC’s q. “The last time we played Folk Alliance it was 2008 in Memphis Tennessee, and our night was just beginning at 1:30.  Now we’re in our 30s.  We’re going to take a nap in the middle of the set, we’re drinking mineral water, and we’re going to talk about arch support later.”  (disclaimer:  I can’t be certain this is a precise word-for-word quote, but that’s basically what he said).
The band members look like they’re having the time of their lives as they open the show with a kick ass set of tunes.  Then their exquisite lead singer Matthew Byrne sings a number allegedly sung by a laid off pulp mill worker praising his former bosses and colleagues.  It’s such a beautiful song he apparently got his job back, and Matthew does such a beautiful job of singing it that I’d hire him too if I were, say, a concert promoter.
More tunes follow, then a lovely a cappella rendition of “Leave her Johnny Leave Her,”  then one more round of tunes to close out the set.
Tom in particular is playing this show with the sheer, unadulterated joy of a starving man turned loose at a feast, and his enthusiasm is infectious.  I’m not trying to suggest that the CBC doesn’t feed him or anything like that, but it’s clear that playing this music is what really nourishes him, and his energy and humour elevate the whole performance.
It’s the best thing I’ve seen so far, hands down. 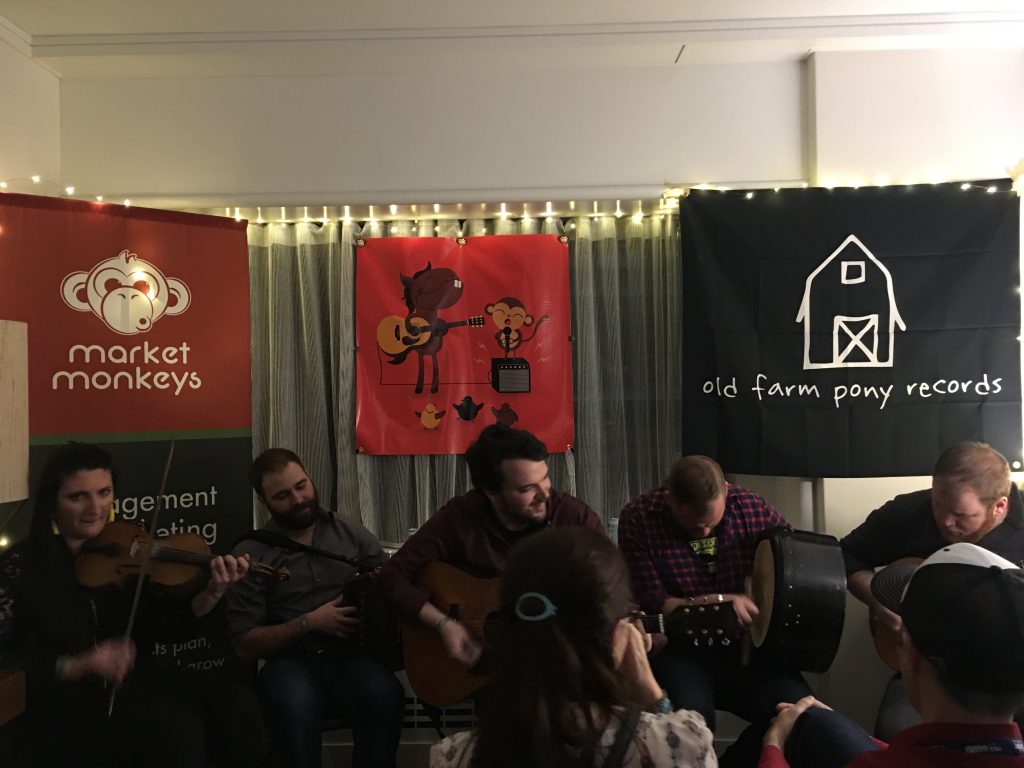 The Dardanelles. Photo by Heather Kitching.

2:50 a.m.:  I’m in a very small hotel room that still has a bed in the middle of it watching Roots Music Canada’s own Christophe Elie play a grassroots acoustic showcase.  Christophe opens with a cover of Steve Earle’s “Jerusalem,” and I think how clever it is for an unknown artist to open a set with a well-known song.  It’s a great way to engage your audience by giving them something familiar they can use to bond with you.  The Steve song also sets the stage for the rest of the show because many of Christophe’s own songs have a similar social justice feel to them.  But the stand-out for me was “Two Feathers,” a song about Indigenous relations inspired by a meeting with then-Attawapiskat chief Theresa Spence.
“Each day I walk the railway line between your world and mine,” it opens, and seldom does a line go by that isn’t equally poetic.  The chorus communicates the idea that a single feather can survive alone but two feathers together can fly.
Nice job, Christophe. You’re a multi-talented guy!
3:00 a.m.:  I leave the suite and notice that the hallway is empty.  I have just shut down Folk Alliance on a Friday night.  Fuck yeah!  I’ve still got it! 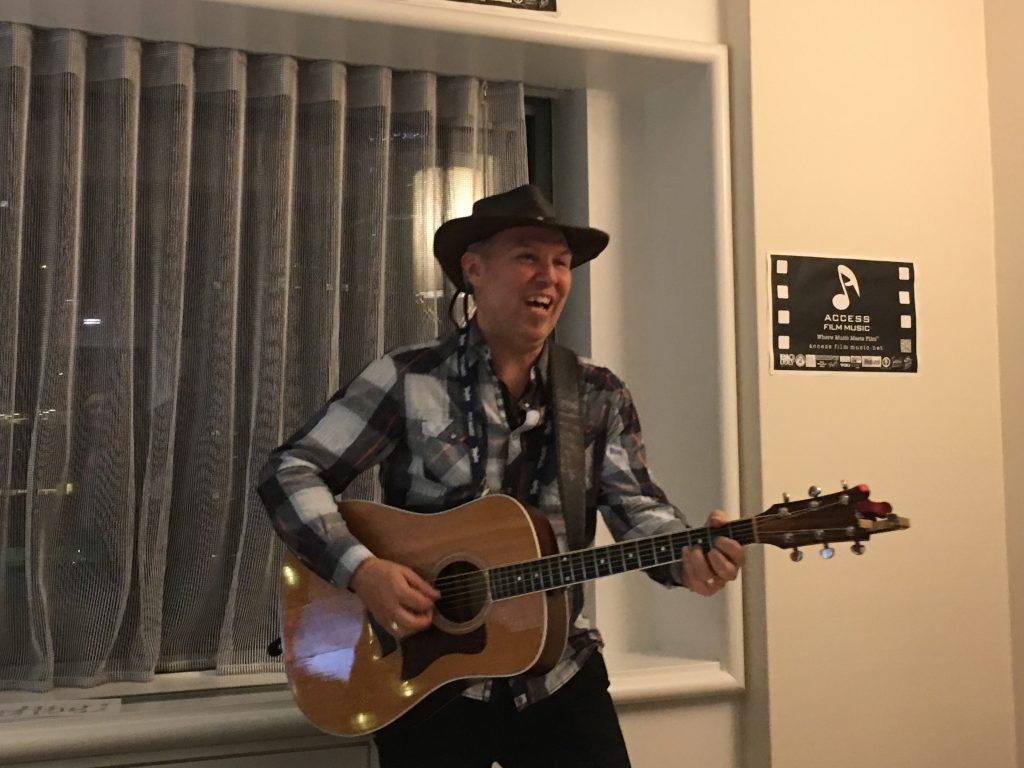