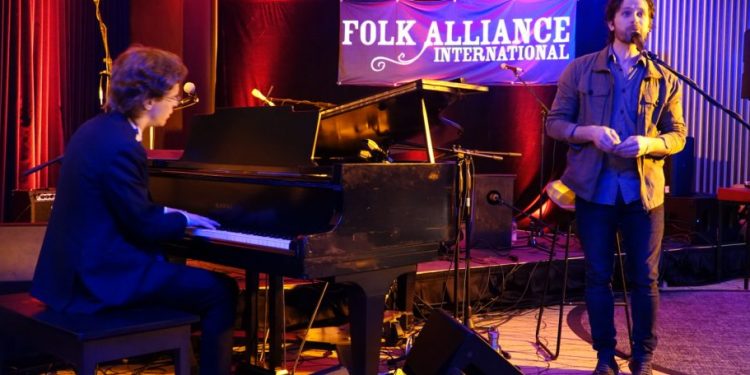 Three floors of the Queen Elizabeth Hotel in downtown Montreal are set aside this weekend for private showcase performances. Every room has its beds removed so that a constant procession of musicians can do showcase performances they hope will catch the attention of festival and concert presenters across North America and around the world. The hallways and lounges are papered with flyers, posters and invitations to showcases. Even the elevator doors are wrapped with photos of artists and their showcase schedule times and room numbers. It is nigh on overwhelming, but it gives you a sense of the musical energy that is within these walls where, fifty years ago, John Lennon and Yoko Ono held their Bed-In for Peace. “Give Peace a Chance” is still an anthem that is as relevant today as it was in 1969, and it will be sung here in multiple live streamed performances at 9:30 a.m. this coming Saturday.

Our evening of private showcases Thursday night started with a Maori greeting, from a band of three charming and determined women from New Zealand. POWhiri implies starting out in the dark and then weaving together, like the strands of a flax basket, to become fully aware together. We became united as one to support what we came together to do. The welcoming performance was performed by Mama Mihirangi and the Mareikura. With flashing eyes, feathered costumes and facial markings (Ta moko), the three ladies performed their three ritual dances and songs. Their startling eyes made you feel a little unsure if you were a welcome guest or an enemy they were trying to frighten away, but by the end, we felt very welcome indeed.

Returning to the Harmonium Room on the official showcase floor, we were treated to something very novel. Simon Beaudry, singer and guitarist for Le Vent Du Nord, has broadened his reach musically by joining forces with the extraordinary pianist, Philippe Prud’Homme. Wanting to extend his performance range and repertoire, Simon is singing classical French songs accompanied by Phillipe’s extraordinarily expressive piano stylings. This is a performance that really made us sit up and take notice. There were folk songs arranged by the likes of classical composer Benjamin Britten, and there were songs from Simon’s own extensive collection of traditional tunes that were arranged by Phillippe. There were also songs from the contemporary repertoire of today’s composers such as Jean-Claude Mirandette. For a talented singer such as Simon, being able to explore a larger vocal repertoire is immensely satisfying for his audience, as well as himself. 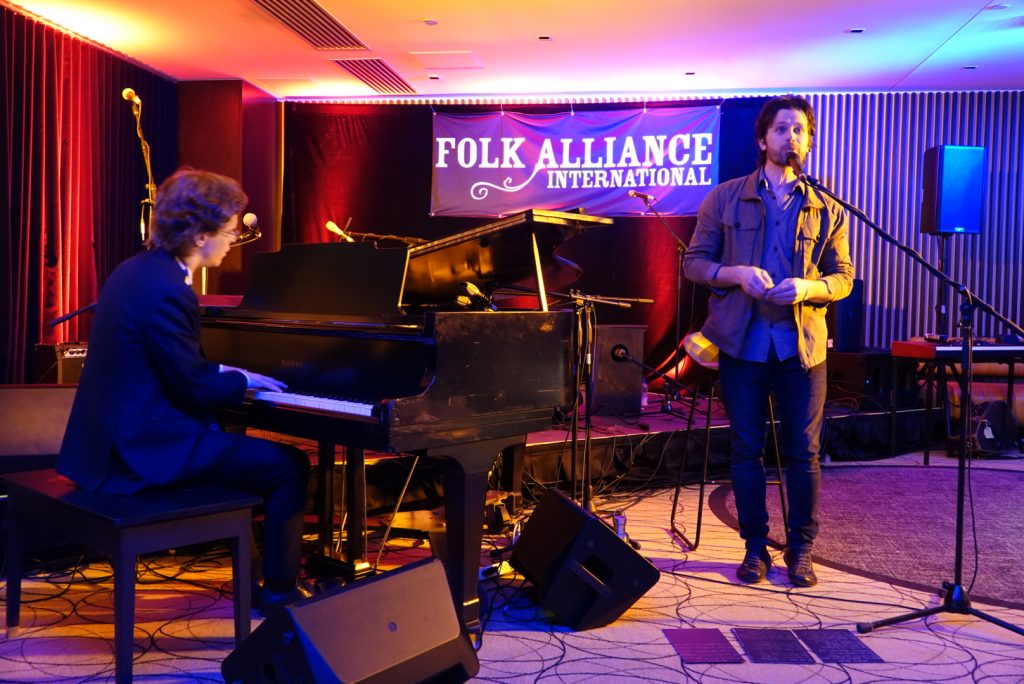 Nicolas Pellerin, Simon LePage and Stephane Tellier were in fine form in the next showcase, performing as Les Grands Hurleurs, roughly translated as The Grand Howlers. Well, they weren’t doing much howling, but they did certainly put on a fantastic showcase that was full of energy. This is rock influenced Québec folk trad. It’s got burning foot percussion, driving rhythms, fast tunes, and dynamic energy driven by electric guitar, bass, mandolin, fiddle and Nicolas’ incredibly fast feet. This talented trio has an amazing creative range, and they don’t do anything without giving it 150 per cent. 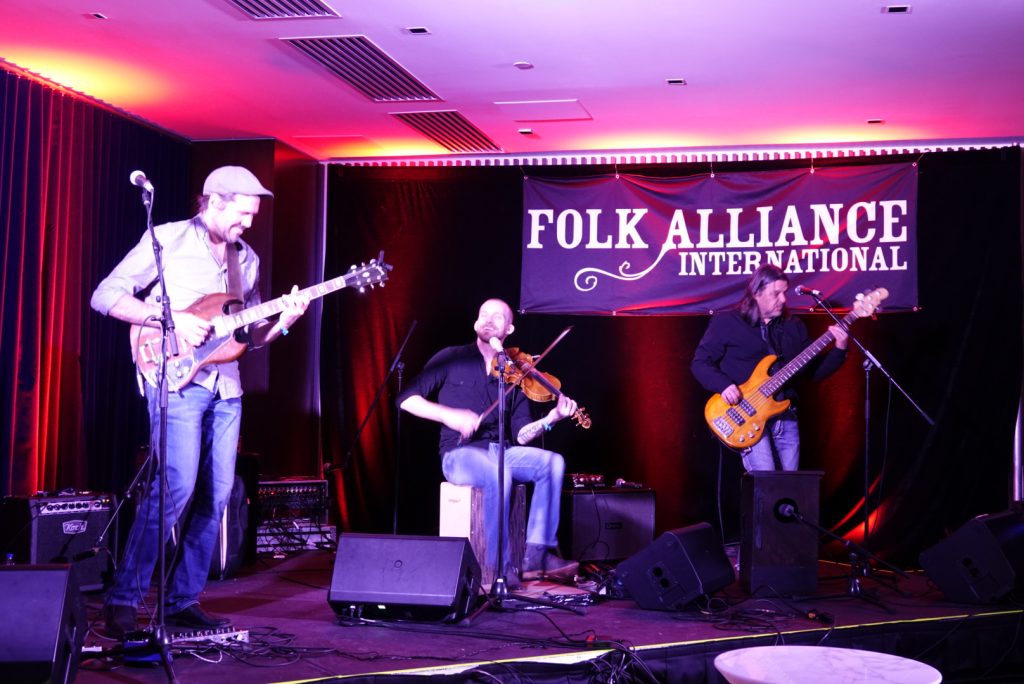 Robin Boulianne and Marie-Pierre Lecault were up next with their lovely union of classical, traditional and modern music for violin and viola. Theirs is a virtuoso performance by a duo completely in accord as they play off each other with perfect rhythms and harmonies. Just lovely, and very different from the usual fiddle fare.

Élisabeth Moquin, Thierry Clouette and Élisabeth Giroux together form the band ÉTÉ. This is the wonderfully lively traditional music of Québec, arranged for cello, fiddle, feet and bouzouki. Their showcase was terrific, even though the room was too small for the astounding step dancing that is usually Élisabeth Moquin’s trademark. But even without that, this band makes you sit up and take notice. Gorgeous three-part harmonies and simply excellent arrangements making full use of the cello make this band really outstanding. We thoroughly enjoyed their showcase. 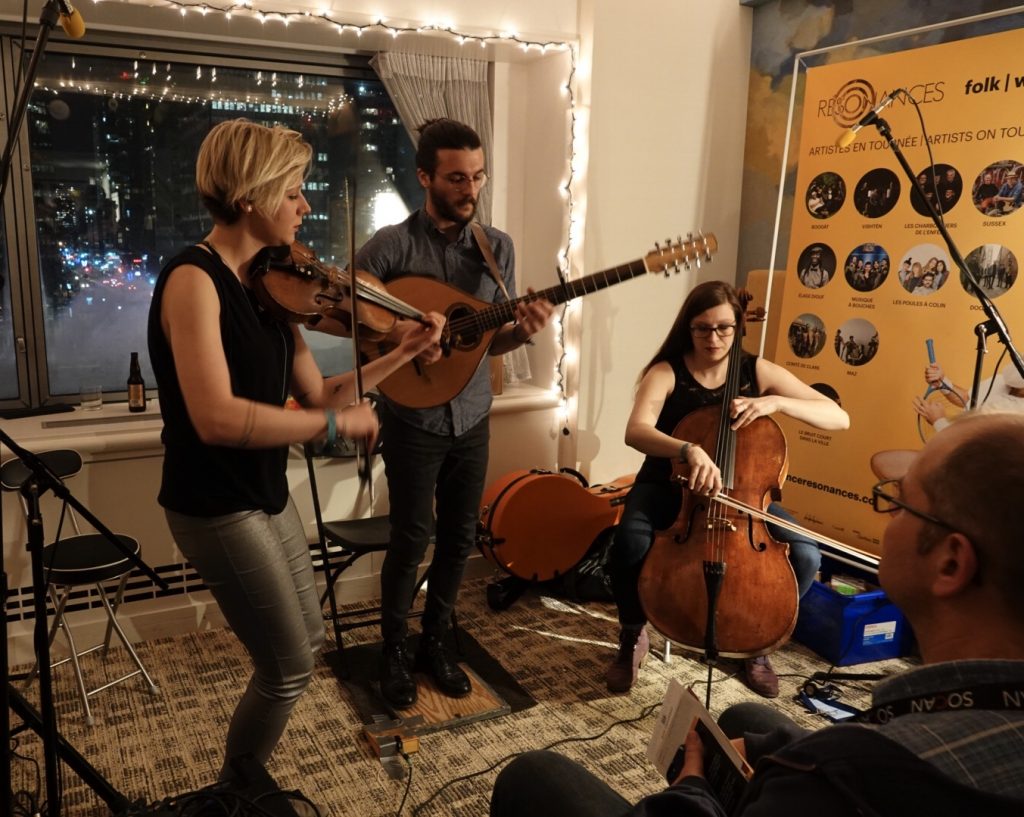 Next, we visited another of Folquébec’s showcase rooms to hear Bon Débarras, which translates as “good riddance.” Well, you don’t want to see the back of this trio at all. Véronique Plasse on fiddle with Dominic DesRochers on guitar and ukulele, and Jean-François Dumas on banjo, foot percussion, and step dance is an absolutely unbeatable combination of talents. All dressed in shades of gray evoking the 1930’s, this trio had a fun, free and easy style. It’s happy music, and Domenic’s relaxed, funny approach to their presentation made it a charming showcase. 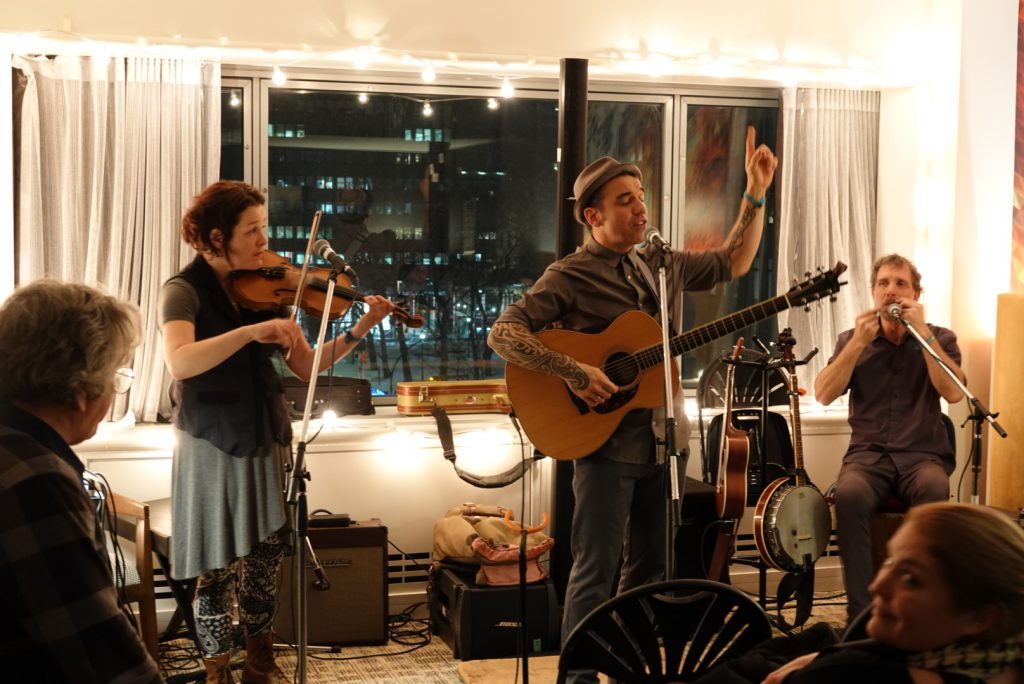 Carrying on with the fun party band approach was La Chasse Balcon, the Balcony Hunt. Drawn from a series of street festivals where the band members and friends played atop Montréal balconies to create street parties, (check them out on YouTube!), this band has celebratory credentials in spades. Catherine Planet founded the festivals and the band as a way of re-creating experiences she had in Louisiana while studying Cajun music there some years ago.

“We are ‘gens du plaisir,'” she said. That’s people of pleasure. Party people indeed. Even better, instant party, just what the Québecois love. Joie de vivre is simply a way of life here, and this easygoing music, fun to listen and dance to, absolutely makes life worth living. 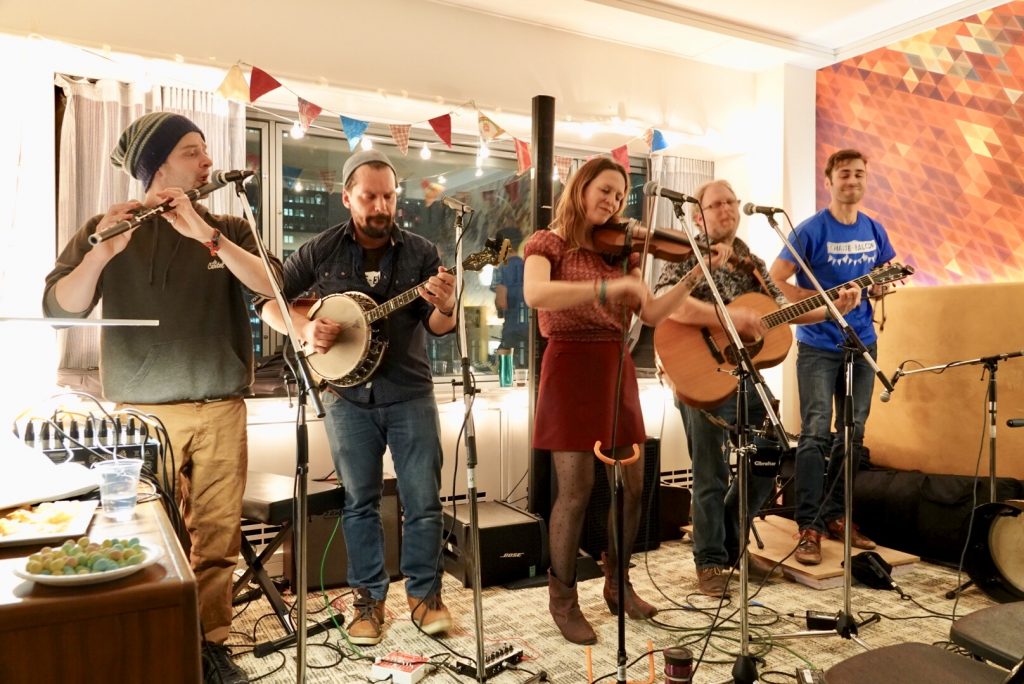 Our final showcase of Thursday night was Les Poules à Colin, comprised of multi-instrumentalist Colin Savoie-Levac and his four immensely talented female friends. These are all young people who have known each other through their musical parents since they were children and developed their own musical chops far beyond expectations. Today, the kids are taking the world by storm, travelling the globe on the strength of their music. Wonderful arrangements of traditional tunes, new compositions and impeccable presentation make these young people a band to watch. They gave the showcase audience a real treat.

And so concluded our Thursday evening private showcases. Two more days left of the Folk Alliance International music conference. Will we survive? We hope so, because some of the most exciting performances of the weekend just may be on Saturday… Stay tuned!