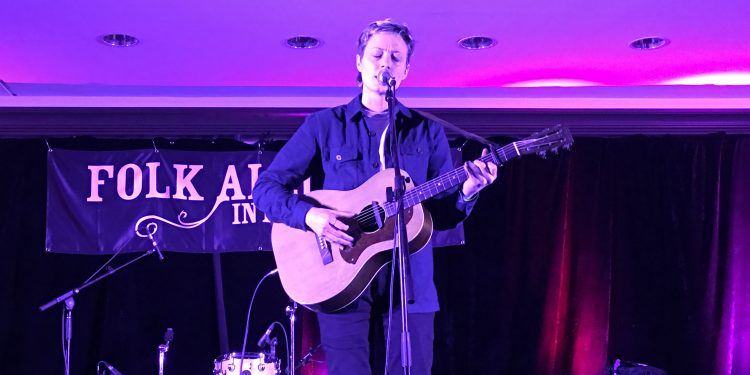 First up in the official showcases of Friday afternoon at the Folk Alliance International conference was Kaia Kater with her band. She played a series of lovely passionate songs on guitar and banjo, including some from her new album Grenades, written along the intersection of Toronto and the Caribbean island of Grenada. There were themes of belonging and migration and socialist revolutions. Kaia’s look of lovely young innocence belies the social justice heart of her songwriting.

Next up were the Oshima Brothers from Maine. This pair of brothers, Sean and Jamie, make stellar harmonies together. Jamie plays every single one of the 30-odd instruments in their home, while Sean plays only guitar but does a fabulous job on the songwriting front.  These siblings show an obvious love for each other and play together with respect and immense joy at being able to share this passion. Their music is at once original, contemporary and rooted in both the internet age and the era of old folk music. Their song “Dancing on the Weekend” perfectly captured the energy of a contra dance weekend in southern Québec with its chorus “you can sleep after you die!” It pretty much also sums up what it’s like at a music conference weekend.
Mo Kenney of Dartmouth, NS did a great set before a really appreciative packed room. As a solo singer-songwriter, she sang a poignant song of first love, but went on to knock us dead with her forthright and funny take-no-prisoners east coast style.
Our final official showcase for the afternoon left us gob smacked. Vishten, with their 15 years’ experience of taking their music on the road, brought us a wall of Acadian sound. Emannuelle, Pastelle and Pascal drove their music like a finely tuned Ferrari takes the curves at full speed on mountain roads. Tunes from their roots on Prince Edward Island and the Magdalen Islands were artfully arranged for maximum energy. There was fast fiddling, complex foot percussion from the ladies and a driving beat that impels you to move. This showcase was absolutely what a good time is meant to be.
Our evening late night private showcases started out on a superb high note as well. The Dardanelles took the stage in the East Coast room. This is Tom Power’s band from St. John’s, full of energy and life from the pubs on George and Water Streets, mere feet from the harbour waters and the ships that ply the Grand Banks fishing grounds as well as international waters. This is music highly influenced by the Irish who settled The Rock centuries ago. (We have a theory: Newfoundland music has to be as fast as possible to warm you up in that dire North Atlantic climate.) Jigs and reels punctuated the air in between songs from the likes of Ron Hynes, possibly Canada’s best ever songwriter and Newfoundland’s native son.
Madison Violet is two lovely ladies who last night were sporting vintage pantsuits, one violent pink and one scarlet, but their voices matched impeccably, singing great harmonies. Theirs are original songs of lost love and betrayal.
“Tell me when you get your heart working; Tell me when you figure it out,” they sang, belting out that pain.
“It’s gone on too long; It’s time to right the wrong” are lines in the story song of the singer’s brother who struggled all his life after sexual abuse by a priest. The ladies of Madison Violet are important messengers of the truth, and they do it in a way that’s nothing short of beautiful.
Dave Gunning is a songwriter with impeccable manners and a heartfelt conscience. His story songs ran the gamut from songs of social justice and personal conscience to just plain fun, funny stories. “These Hands” talks about the choices we have in life. How will we use our hands to make a positive change in the world?
He also sang a story about his grandfather who worked on a train through Pictou County, NS. Grandpa shoveled coal off the train to give the poor people something to heat their homes with in a dire winter, he sang. For Dave, his songwriting is absolutely a way to illuminate the human condition and help us all become better people.
Our very late night showcases included one by Suzanne Lévesque and Craig Bignell, known as Over The Moon, who came from Longview, Alta., to play their late night showcases.  Many of their songs draw from the obvious love they share. Craig wrote a song about what it’s like to spend three days after falling in love not knowing if that passion is reciprocated. The couple also premiered their new recording, Bluebird, a simply gorgeous song that encourages us to find the courage to fly.
Our night was finally concluded some hours before dawn with an amazing showcase by Connie Kaldor, who made our night and day absolutely complete with her rendition of “Wood River,” following on a very funny, suggestive song about pierogies and kolbassa. Connie totally nails each and every line of every performance.
And so concluded our Day Three, Friday, of the Folk Alliance International conference in Montreal.
If you are enjoying this content, please take a second to support Roots Music Canada on Patreon!