Folk Alliance: The revolution will not be translated; Corby comments on activism and advocacy at FAI 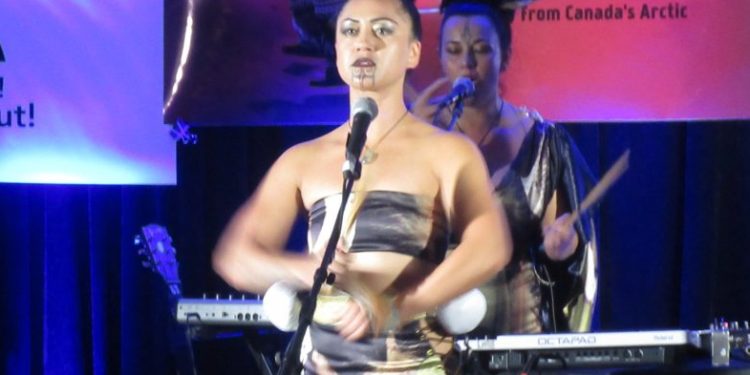 Gather round folkish hearts. A freedom fire is burning in mid Montreal. As Haiti exercised its right to riot and R. Kelly’s and Ryan Adam’s ears caught fire in a blaze of sexual scandal, the folk guard refreshed the law of musical morality and a best-case scenario will have the three thousand participants leaving the Folk Alliance International conference renewed and realigned to the “revolution of hope” that folk music originally set out to accomplish in the 1930’s.

Thursday’s roster of  roots rebels was helmed by a vibrant captain, John Kay of Toronto, whose band Steppenwolf initiated advances in the very fabric of sixties rock, arguably the most effective force for social change in the history of music until being overtaken by reggae and hip hop. His new music is pure unrestrained activism. Refusing to “let the heart turn away from this shameless age,” he followed his set of original blues with a 45-minute impromptu account of his preservation and education efforts on behalf of elephants and their failing ecosystems. The dozen fans in attendance included fellow disturber and Wednesday’s Choice of The People honoree Buffy Sainte-Marie, whom he befriended fifty-odd years ago at The Purple Onion coffeehouse in Yorkville, during the glory years of rad folk.
Evidence that the vitality of that movement has remained potent was heard everywhere in the Fairmont. Audiences ranging from groups of three to hundreds were learning to sing along with the choruses of songs about over-fishing, Indigenous rights, and secular faith. Dave Gunning, in a showcase as tightly packed as one of the hotel elevators, got the first standing ovation we’ve witnessed so far with his song “Sing it Louder,” urging, “Let’s all join hands and beat the drum.”
Addressing another aspect of music’s effectiveness at unification, two seminars engaged large groups of musicologists on the meaning and influence of international music, often pigeonholed by the industry with the execrable term World Music. Ranging in scope from field recordings to experimental cultural fusion adventures, the term is considered to be abusive to progressive global empathy because of its lack of specificity and the control of its access by marketing gatekeepers in the global north.
Advocacy and showcases by the Smithsonian Folkways label and a broad slate of presenters at the conference are attempting to set a new template for perception and appreciation of the unique traditional identities at work in music creation.  I was personally overcome by an incomprehensible but powerful force emanating from three Maori women performing dance with looped percussion and vocals as Mama Mihirangi and the Mareikura.  Their mesmerizing but fractal flow and otherworldly theatrics invoked a rapturous level of being that only the purest music is able to conjure.
As one astute panelist remarked, “Why are we spending so much effort trying to define world music and folk music?  All the terms suck.  We can’t even define music!”
The revolution will not be translated.
The conference continues through Sunday.  Its ideas will continue through generations.
If you are enjoying this content, please take a second to support Roots Music Canada on Patreon!