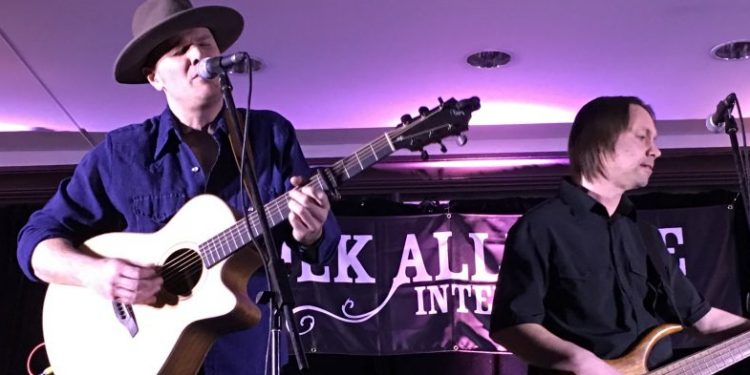 The Roots Music Canada team is out in force in Montreal this weekend for the annual Folk Alliance International conference, the world’s largest gathering of folk artists and industry people.  A key component of Folk Alliance is the showcases, series of short performances by artists, which provide concert and festival promoters with a chance to sample their lives shows. Folk Alliance produces a number of official showcases as part of the conference and selects artists from a large pool of applicants.  Individual artists, labels, publicists and other industry people also rent rooms and host private showcases well into the wee hours.

4:20 p.m. – Jenn Grant is singing a new song called “Favourite Daughter” in the official showcase called Canadian Music East Coast Style. This is her first performance since giving birth in December, and these are new songs written during Jenn’s pregnancy last year — in anticipation of an album project planned before the pregnancy (side note: Jenn had a son, not a daughter)

The songs have a delicate sweetness to them, and “Lion with Me” features lovely, understated backing vocals from Jenn’s partner in life and music, Daniel Ledwell. In fact, Jenn got the audience laughing hysterically during that number by engaging in dramatic flirtatious attempts to get Daniel’s attention.

4:50 p.m. – Dave Gunning tells the audience he too is singing new songs tonight because where better to try out new material than a show that’s “not really that important.” The audience chuckles. He then launches into a song inspired by his recent activism against the dumping of untreated pulp mill effluent into Nova Scotia waters.

That proves to be the last of the new numbers because next he sinks his chops into audience favourite “These Hands” to cheers from the crowd. Then it’s onto “A Game Goin’ On,” the award-winning hockey song he wrote with David Francey, which is preceded by a solid compliment of jokes at the expense of Leafs fans. As a Canucks fan, this does my heart good.

By the end of the set, Dave’s got the audience singing along with him and laughing at every joke.

“We don’t always tune, but you guys are so nice here today,” he tells the audience before closing with his 2016 response to the US election, “Sing it Louder.”

Really, what’s to say about Dave that hasn’t already been said? He’s the whole package. He’s an absolutely first-rate songwriter, a particularly strong guitarist as singer-songwriters go, and entertaining as hell on stage.

And to top if off, he’s got class. Before tearing into that final number, he takes a moment to give a shout out to long-time Atlantic music publicist and manager Lynn Horne, who died just as the conference was getting ready to kick off.

5:40 p.m. – Speaking of acts that have the whole package, the East Pointers are on stage now showing off the red clothes they wore for Valentine’s Day.

Atlantic Canada is clearly just putting its greatest current stuff on stage right now and daring the foreigners in the audience not to be impressed.

Juno winners for their most recent album, the East Pointers play a flawless set of songs and tunes alternating between rollicking instrumental numbers and tender ballads sung in beautiful three-part harmonies – and all of this is backed by a driving programmed rhythm section.

They’re rewarded with the second standing ovation of the evening – in this room at least – after the one awarded last hour to Dave Gunning.

6:45 p.m. – The phone I’m typing this on is running out of juice, so I head upstairs to grab my charger. Well, that’s the plan, anyway. In reality, I run into David Francey and have a lovely chat with him in the corridor before finally making it to the elevator. Suddenly, the elevator opens, and an angel appears before me. She’s lifting a chocolate bar toward my face and offering me a piece. Wait. It’s not an angel; it’s Tannis Slimmon. Close enough. How did she know I’ve been craving chocolate all day? How does she always know just what to do to make a person feel better? Does she always carry chocolate at Folk Alliance? Anyway, with my blood sugar level slightly elevated, I make my way to my room, get my charger, and return to the showcase in time to catch the end of David Myles’ set.

7:50 p.m. – Oh hey, audience. I don’t know if we’ve sufficiently proven yet just how much Atlantic Canada punches above its weight in the talent department. Here’s Lennie Gallant to close the showcase. He’s an Order of Canada winner, and he’s practically a legend in East Coast circles, but just watch how he manages to be this awesome and insanely humble at the same time.

He introduces his entire band after the very first song. Then he heaps praise on Maureen Ennis’ rendition of his song “Peter’s Dream” and jokes that the only problem with it is now people want him to sing it like her.

He plays a mixture of brand new stuff like “Selkie” and “Sequoia” from his highly-regarded new album Time Travel and older numbers such as the aforementioned “Peter’s Dream.”

He closes the set by turning the audience into a human horn section for the rocker “The Band’s Still Playing.”

Oh look at that! Another standing ovation!

Folk Alliance: The revolution will not ...