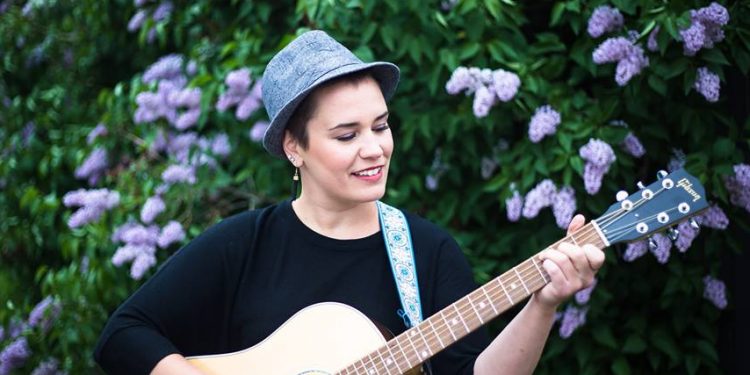 When I first got the Facebook invite for a show called Sonia Deleo and Friends from Sonia herself, who is a fantastic local singer-songwriter, I knew it would be an exciting night. When I saw my good friend and exceptional spoken word artist Miranda Krogstad was on the bill as well I knew this was going to be something I shouldn’t miss.

I did, however, have a couple of anxiety-filled moments in the days leading up to the show as I researched the venue and the bathroom situation. As some of you may already know, I suffer from MS and rely on a mobility scooter to get around. Going to a new or unknown venue can be very intimidating, especially when it comes to washrooms. It really is amazing how far we still need to go when it comes to building and washroom accessibility.

The artist studio being used for the performance, named nvrlnd, is a small creative hub on the edge of the industrial district in Calgary’s Ramsey neighborhood. For those of you familiar with Calgary, it is located across the street from the infamous and now demolished Shamrock Hotel.

I emailed the venue to ask about accessibility, and I was told that the building itself was accessible but, as so often is the case, the washrooms were not. However the person on the other end of my emails was very accommodating, personally checking with a pub next door and assuring me they had accessible washrooms that I would be allowed to use.

With my mind put at ease, my wife and I made plans to attend the show on Saturday night.

The studio itself was a small, intimate room casually decorated with black folding chairs, worn and distressed by what I would assume was years of live show abuse. A smattering of older futons and couches also provided seating for the 40 or 50 people who were in attendance for the show. Judy Deleo, Sonia’s mother, who is a wonderfully talented artist in her own right, decorated the walls of the studio with custom photos that were being offered for sale as well. Friends and family were working everywhere from the front door to the small bar at the rear in an effort to make sure Sonia’s show was a success.

I parked my scooter in a spot up front where my wife could sit next to me, and we waited for the show to start.

The opening act was a young man I had never heard of before but who I believe we are going to hear a lot from in the future. Jacob Payne is a singer-songwriter originally from Newfoundland but who moved to Calgary a little over a year ago. His warm country voice soothed my soul as he opened with a cover of Blue Rodeo’s classic hit “Bad Timing.” Then he broke out a Jacob Payne original song about longing for home and the simple things often missed when you move away – like the smell of mom’s homemade food or the simple comfort of a cup of tea. Jacob also hit us in the feels with an inspired rendition of the Leonard Cohen classic “Hallelujah.” When finishing off his set, Sonia Deleo joined him on stage for what would be an incredible duet on the Dixie Chicks’ staple “Landslide.” Two incredibly powerful voices melted together on stage in a beautiful harmony.

Next up to the stage was my friend, incredibly talented spoken word artist, Miranda Krogstad.

The eternally positive and endlessly optimistic Miranda put a smile on the crowd with her words. Her poems, backed by guitarist Patrick Zalinski, were magical. She started with a poem titled “Crazy,” in which she gives a shout out to Gnarls Barkley for the musical inspiration behind the piece. The crowd was quiet and hung on every word as Miranda mesmerized them all with poem after poem – each one delivered thoughtfully and eloquently to rousing applause.

After Miranda Krogstad and a small intermission it was Sonia Deleo’s turn to take the stage. If you’ve never seen Sonia perform before, she not only takes the stage with a vengeance but she kidnaps the audience and runs away with it. She took us on a magical musical journey with her original writing from genre to genre to genre. Her voice is so powerful, and she is so  entertaining you dare not resist as she takes you away. Her bluesy, folk, rock, R&B and jazz inspirations make it difficult to classify her as anything other than brilliant. As I sit here and try to think of comparisons, my mind is drawn to Anne and Nancy Wilson, one for the passion and power in her voice and the other for her considerable skills with a guitar. What truly sets her apart from other singers and musicians is her incredibly strong songwriting. Her lyricism is both dynamic and compelling. You leave a Sonia Deleo show believing you just witnessed something incredible, one of those moments you look back on later and say, “I saw her when.”

The small studio space packed with friends, family and fans had love and music bursting from every corner. What a wonderful evening it was.

You can reach the artists @