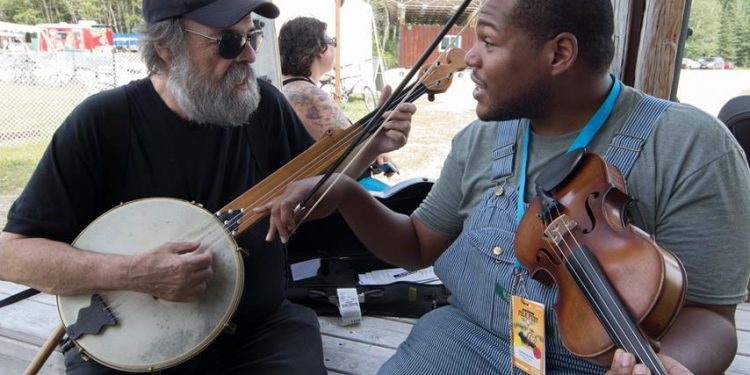 Home Routes/Chemin Chez Nous, the pioneering Winnipeg-based non-profit organization known for presenting house concerts from major cities to rural hamlets throughout Canada, is pleased to announce the launch of The Wednesday Night Folk Show with Mitch Podolak. This weekly podcast connects Home Routes hosts, artists and fans under one roof so they can share music, ideas, and news about the growing Home Routes house concert circuits.

The Wednesday Night Folk Show is a production of Home Routes Radio and is hosted by Mitch Podolak, creator and founder of Home Routes/Chemin Chez Nous. Now arts lovers and music fans can get even more involved supporting the work of Home Routes with a small monthly subscription of $5 via our Patreon campaign, here. Becoming a subscriber will give you access to bonus podcast episodes of private concerts and more.

The weekly radio shows are available for all to listen to and can be heard online via Home Routes Radio. Episode 1 features Annie Avery, a Yukon ragtime pianist and teacher. Episode 2, released yesterday, features one of Canada’s top clawhammer banjo players, Allison de Groot.  New shows come out every Wednesday. Links are below to the first two episodes.

About Mitch Podolak
Mitch Podolak is special projects manager and founding artistic director of Home Routes. Mitch is acclaimed throughout Canada, and his career in folk music and broadcasting spans decades, beginning at Toronto’s famous Bohemian Embassy Coffee House in 1961 when, at the age of 14, he began to exchange his services as a busboy for free entry into the Sunday night hootenannies. By the time he was 16, Mitch had exchanged the tasks of washing coffee cups for the role of booking artists for the facility. In this capacity he produced his first shows of international stature including performances with the New Lost City Ramblers, Mike Seeger, blues ace Reverend Gary Davis, a young Joni Mitchell, Dave Wiffin, Paul Neary and Robbie Basho. It was at the Bohemian Embassy that he learned his trade.

Mitch has had a long and fruitful experience with CBC Radio One and Two. As a documentary maker in the late sixties he produced shows for CBC Tuesday Night, Between Ourselves, Five Nights and, for a period, worked with Peter Gzowski as a stringer documentary-maker for This Country in the Morning. Mitch went on to host Simply Folk from 1986 until 1991 on the entire network.

Supported by his CBC connections, particularly Paul Mills, producer of the national radio folk show, Touch the Earth, in 1974 Mitch began to create cultural institutions all across Canada. He conceived and implemented the Winnipeg (1974) and Vancouver (1979) Folk Festivals, the Winnipeg International Children’s Festival (1982), The West End Cultural Centre (1987) and Barnswallow Records (1975), the label that made Stan Rogers famous. In addition, he was instrumental in establishing the Edmonton and Calgary Folk Festivals (1980) and the Stan Rogers Folk Festival (1997) in Canso, NS. Moreover, he created and served as AD for two travelling folk festivals in Alberta (1980) and in Atlantic Canada (1983).

In the role of artistic director, he served for 13 years at the Winnipeg Folk Festival, two years at the Vancouver Folk Music Festival, two years at the Winnipeg International Children’s Festival, one year at Summerfolk in Owen Sound Ontario (an emergency fill-in in 1986), one year at the Stan Rogers Festival (1997) and five years at the West End Cultural Centre (1987-92). In the last few years Mitch has served as a consultant to the Salmon Arm Roots & Blues Festival, Northern Lights Festival Boreal in Sudbury and the Ottawa Folk Festival. Over the years, he has produced hundreds of concerts ranging from shows by DOA to performances of Handel’s Messiah.

In February 2007, Mitch’s passion and vision led to the establishment of Home Routes Inc., a national professional non-profit arts organization based in Manitoba, mandated to create a unique delivery system for folk and roots music.

Home Routes is very proud to be able to present an icon of Canadian music of the calibre of Mitch Podolak in a weekly podcast allowing his considerable expertise and talent to reach out to Canadian music lovers in this dynamic new way.

The cultural life of the country has been discernibly enhanced because of his work.

Help us continue this important work
There are many ways to get involved in furthering Canadian music with Home Routes/Chemin Chez Nous. One way is through financial support by becoming a monthly subscriber at our Home Routes project Patreon page.  With a contribution of $5 per month, you will be helping Home Routes/Chemin Chez Nous bring more music with more musicians to more places in Canada. Becoming a subscriber will also give you access to bonus podcast episodes of private concerts and more.

Home Routes appreciates the many financial demands and obligations of today’s Canadian households and that a monthly commitment of $5 represents a very generous obligation on the part of many of our supporters. That’s why your contribution is very highly valued and Home Routes will show its profound gratitude by working ceaselessly to improve our delivery of valuable content and expanding access to quality entertainment and music to all Canadians no matter where they reside in our vast country. Our goal is to have 1,000 people supporting Home Routes at a level of $5 per month. We believe we have 1,000 fans in Canada that will support and help us grow in new ways and directions that up to now, we could only have imagined.

No matter the amount, your support matters. If you love folk music, the scene, the shows, the pickers, the songs in your head, the lonesome harmonica blowers, the cultural life of your country, please consider becoming a subscriber via Patreon here.

Home Routes/Chemin Chez Nous thanks our funders and partners for their support. This project is made possible in part by Manitoba Arts Council, FACTOR, SOCAN Foundation, and The Canada Council for the Arts.