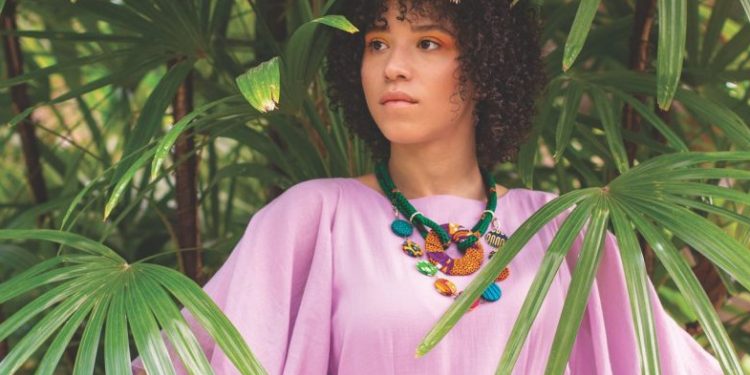 Kaia Kater threw down the musical gauntlet in 2016 with the release of Nine Pin, a record that at once showcased her mastery of old-style Appalachian banjo and her incisive observations of 21st century life – earning her high praise from Rolling Stone, the Guardian and other outlets of record.

Following up such an impactful recording can be the downfall of many artists, but Kaia makes artistic evolution sound effortless on Grenades, her first full-band recording, and a deeply personal project focused on her own family history – notably the experience of her father, who fled to Canada from Grenada following the 1983 U.S. invasion of his homeland.

While Nine Pin was a raw, stripped-down affair, Grenades could almost be described as “dreamy” thanks in no small part to Christine Bougie’s lap steel work and the easy-going backing vocals provided – mainly – by Lydia Persaud, Meg Contini, and Jill Harris (a.k.a. The O’Pears).  In fact, the combination of country music instrumentation with Kaia’s sophisticated melodies and understated vocals to me recalls k.d. lang’s Ingenue. (Kaia has cited Daniel Lanois as an influence on the production)

And while that k.d. recording coincided with a time in the artist’s life when she started identifying publicly as a lesbian, Kaia’s new album, written partly in her father’s homeland, sees her exploring who she is as a young woman, with a particular focus on her mixed-race heritage and Caribbean ancestry.

Her father, Deno Hurst, provides several spoken interludes on the album, describing the events preceding his departure from his homeland.

“La Misère” celebrates Kaia’s heritage with a rewritten version of a song from an Emory Cook Smithsonian Folkways recording.  And Kaia wrote the title track while imagining what it must have been like for her father to witness the invasion of his country as a boy.

“Surf the wave now, taste the metal on your tongue / March the dogs of war into the sun,” she sings in the opening lines.

Kaia’s lyrics read like impressionistic poetry.  Much is communicated through metaphor and fragments of vivid imagery, which, divorced from any plainspoken storylines, transport listeners into evocative scenes rather than hitting them over the head with a message.

“Meridian Ground,” for example, reflects on Kaia’s roots with descriptions of the “east isle,” where people gut fish and the wharfmen sing and beat the water – and where her aunt died “in a one-room house on the top road / with the candles cold, and a smile upon her face.”

“Starry Day” appears to contemplate her father’s arrival in the relative safety of Canada, with lines such as “Backwards now you dance to freedom / Lift your gutted lungs and sing.”

The closing track, “Poets be Buried,” Kaia explained in the news release about the album, sees her considering how to talk about the past to future generations – which she does in part by imagining a conversation between a father and a daughter.

Listening to Grenades and reading Kaia’s lyrics, it’s hard to believe that the artist is still only in her mid 20s.  She has an artistic confidence that many struggle their whole lives to achieve, and it’s exciting to contemplate where her creative muse will carry her next.

Grenades would be a stellar album by any measure.  It’s all the more thrilling when one considers that it was created by an artist who may still be far from her peak.

Check out these two new songs from ...

Take a listen to these new songs ...