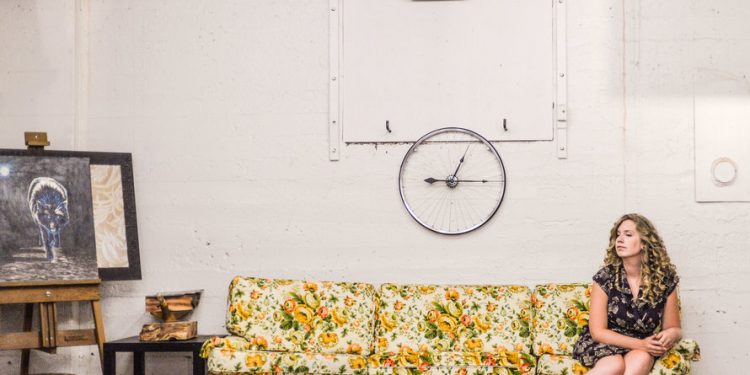 Danielle Knibbe is the winner of this year's Colleen Peterson Award.

Toronto-based, Edmonton-grown singer-songwriter Danielle Knibbe – whose work the moose was enamoured with last year – will be releasing her sophomore album, The Ribcage & The Heart, on March 1. Every song on the new album has a counterpart that explores the same theme; there’s a “ribcage” song and a “heart” song. Two of the songs from the album, “Long Distance” and “Footnote,” were officially released last week as a two-song EP (think side A and side B) entitled INSECURITY.

Danielle named it INSECURITY because “Long Distance” and “Footnote” both explore a specific type of insecurity, which is insecurity within a relationship.

“’Long Distance’ is a reflection on a time when my boyfriend (now husband) was going to school in Toronto, and I was based in Edmonton,” said Danielle. “He was always so stoic when he had to leave to go back to Toronto, and I would be a complete mess. This song is everything I wish I’d had the nerve to say in the moment, and it only took me six years to work up the courage. And ‘Footnote’ is about feeling replaceable in a relationship. Love can be a temporary thing, and it’s so incredibly terrifying to give yourself to someone with the knowledge that one day they might not even remember your last name.”

The release of the two INSECURITY tracks follows the release of two infatuation-themed songs, “Agony” and “Simple Love,” back in November 2018. All four songs will be included on Danielle’s The Ribcage & The Heart album, which is full of examples of her lyrical skill, with three of the songs having been selected for print in American Songwriter’s monthly lyric contest. This new album, mixed by Howard Bilerman (Arcade Fire, Basia Bulat) and featuring Fats Kaplin (John Prine, Jack White), showcases the depth, insight, passion, and potential of this up-and-coming songwriter.

The Ribcage & The Heart will be available on Spotify, Apple Music/iTunes and other digital retailers and streaming services. Danielle will be touring in support of the album in March. See below for tour dates.  For more information and for the most up to date tour schedule, please visit: danielleknibbe.ca