12 days of Christmas: An homage to ‘The Huron Carol’ 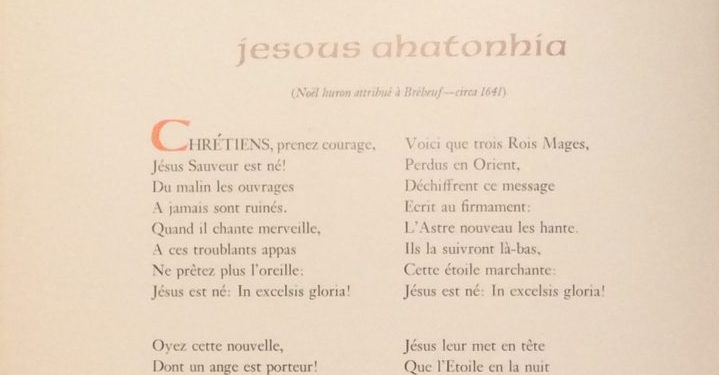 Eric Kanstrup was my friend. He was my father’s age, and after our first meeting, we identified our shared preference for folk music. Eric was a Dane, and somewhere in my house there is a picture of him with his folk trio in Denmark.

Eric was the sales manager for MOM Printing in Ottawa. They printed my first songbook, Coast to Coast Fever, in 1981, and Eric worked with me to understand the world of printing.

Eric showed up to many Folklore Centre events: caroling, workshops, sing-alongs, concerts. We didn’t see each other regularly, but it was clear we liked each other.

In February, 1994, Eric gifted Terry Penner and I a centennial copy of a small hardcover book that included a 7” vinyl recording. The book was A Canadian Christmas Carol, the beautifully illustrated story of the song “The Huron Carol,” written in the original Huron language celebrating the birth of Christ.

Jean de Brebeuf, a French Jesuit missionary preaching to the Huron, wrote the words in the 1600s to the tune of an older French song. The song has a French translation and, since the 1920s, there’s been an English translation.

I have never played the vinyl disc. It’s a recording of a version of the song sung by St. Michael’s Choir School in French and English. It’s not the version that interests me.

The two Canadian musicians who have kept this fine song alive are Tom Jackson and Bruce Cockburn.  Bruce’s version was my first real understanding of the cultural realities of the song. Bruce recorded it on his 1993 album, Christmas. He sang it in the original Huron language. There’s lots of information about this on cockburnproject.net.

Most of us know Tom Jackson’s wonderful version of the song, sung in English. Tom’s version is haunting and melodic, with his recognizable voice and some solid but simple guitar playing. He tours his annual celebration of Christmas, The Huron Carol, every Christmas season and has for decades. In fact, it’s touring right now, mostly in western Canada. Tom raises money to end hunger with this tour. You can find all the tour info at huroncarole.ca.

This book has become an annual December visitor along with my Santa Claus collection and our lights (aren’t LEDs incredible!). It’s one of my touchstones for a few reasons. It’s a unique part of my Christmas celebration. It reminds me of the multicultural history of Canada. It’s a fine song to sing. It reminds me of my former lives. And it brings me back to Eric.

Eric passed away a few years ago. He moved to the west coast to be with his kids in his older years. Just before he left, he invited me to his nearly-empty house in Ottawa to say goodbye. It wasn’t an emotional goodbye. Just a final one.