12 days of Christmas: Ignace fires back at the Arrogant Worms 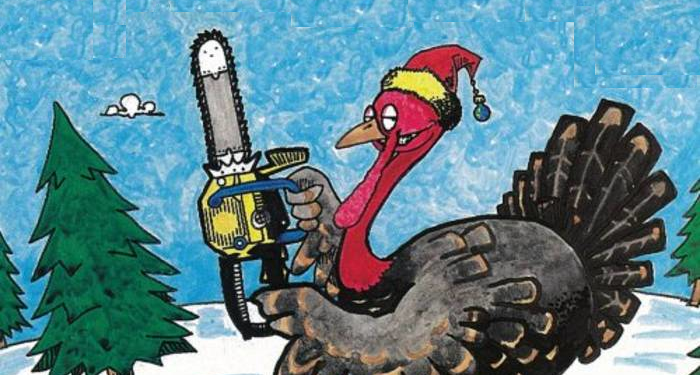 It’s been 21 years since the Arrogant Worms released their infamous Christmas Turkey, a masterpiece of holiday cynicism marked by anti-classics such as “Santa’s Going to Kick Your Ass,” “Dad Threw Up on Christmas Day,” and of course, the unforgettable, atonal closer, “Christmas in Ignace.”

A fictionalized portrayal of the very real township of Ignace, two hours west of Thunder Bay, the song describes the residents of this fine stop on the highway celebrating the holidays by exchanging rocks and throwing rats at children stuck to street signs.

The story behind the song, according to Worm Mike McCormick, is this:  the band was on its way home from a winter tour and was planning to spend a couple of nights with bandmate Trevor Strong’s parents in Winnipeg.  But the forecast was calling for a massive storm to roll in from the west, so the guys decided to drive through the night to try and outrun it.  By the time they arrived in Ignace, it was the middle of the night, and the band was in a foul mood, through absolutely no fault of the townspeople.  As they were driving past, they noted that just one business along the highway was decked out in Christmas lights, and a badly malfunctioning string of them at that.

“Hooray!  It’s Christmas in Ignace,” Mike recalls shouting out the window to the slumbering population of 1,200 or so.

And that’s it.  That’s how the song got started.

To this day, I don’t believe Ignacians, or whatever they call themselves, have ever been given a proper chance to respond to its characterization of their town, and this Christmas, 21 years later, I’ve decided I should do something about that.

You see, Ignace is not just some faceless small town to me.

I live in Thunder Bay, so I’ve actually spent time there, unlike the Worms, and I’ve found it to be a well-spring of creativity – the sort of place we in the arts are supposed to celebrate.

One of the very first times I drove through Ignace, I stopped for dinner at the Tempo truck stop diner off the highway and instantly fell in love with its character.  In a world of gleaming white Husky diners or freshly-reno’d Flying Js, the Tempo was like something out of another time. I don’t remember it well enough to describe the décor in detail, but if you think orange vinyl, wood paneling and 70s linoleum – or was it well-trampled carpet? – you’ll get the picture. Instantly, I pulled out my laptop and started to write whatever it was I was working on writing at the time, because the place inspired creativity.  From then on, I always stopped at the Tempo when I went through Ignace. That is, until it closed a few months ago.

So as you can see, I have an affection for Ignace, and I feel compelled to allow the people of this town to set the record straight about how they actually celebrate Christmas there – because although I’ve never actually been there on Christmas Day, I’m pretty sure the Worms haven’t either.

Over to you people of Ignace.

“I think there is a good Christmas spirit here,” said Ignace economic development officer Jason Felix, who is originally from Granada and freely elected to move to the town to advance his career.

If you drive around at night, you’ll see lots of houses with Christmas lights up, and different organizations hold suppers and events, he said.

Asked if she’d ever heard of people exchanging rocks or throwing rats over the holidays, she replied, “No. I haven’t heard of that,” and, for the record, she denied being aware of any other unusual Christmas traditions in the town either.

“[We do] Just normal things that happen anywhere else at Christmas time,” said Kim Richards, the town’s assistant librarian. “They always have a Christmas parade … There’s pictures of Santa.  … There’s pancakes with Santa going on this weekend too.”

“We don’t really give rocks out as Christmas gifts,” she added, “and personally I do find the song funny.  I’m not offended by it, but I do think it makes us sound pretty stupid.”

Asked if she had anything she’d like to say to the Worms, Kim replied, “I hope they don’t actually think that we’re a bunch of inbred rock-givers, and I’m sorry they had such a terrible time in Ignace.”