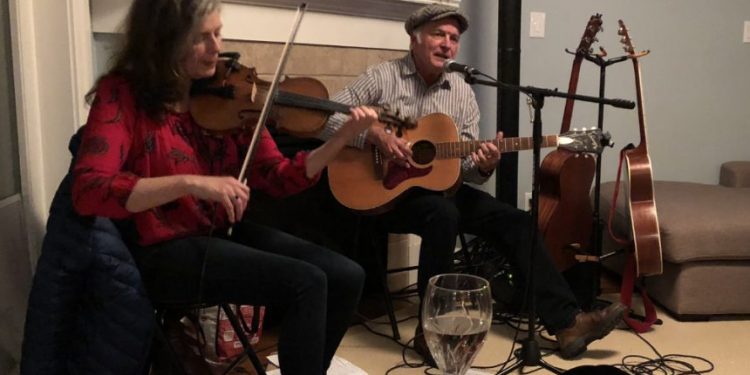 It was an evening of shatteringly poetic story songs from Ian Tamblyn with Anne Lindsay last Sunday night in Port Credit, Ont.

The occasion was a house concert to introduce Adventure Canada‘s Ireland Circumnavigation and Scotland Slowly expedition cruises in the summer of 2019.

Ian is to be the cruise host for both expeditions, so this was an opportunity for past and future Adventure Canada guests to receive an introduction to the kind of musical and cultural education they have to look forward to on those upcoming cruises.

Ian, writer of 2,200 unique songs and master of another thousand by other writers, has a real way with words. Accompanied by the gorgeous fiddle of Anne Lindsay (Blue Rodeo, Jim Cuddy Band), the duo started off their set with Ian’s evocative song “Woodsmoke and Oranges,” inspired by the moody atmosphere of Lake Superior. Old canoes, loon cries, silver birches, paddles, a rugged northern shore, Ian’s lyrics captured an essence of the Canadian Shield lands in this love song of the north.

Ian has written a number of songs about the Arctic; many came to him during his travels on Adventure Canada expedition ships. The company sets out on more than a dozen expeditions each year, some in northern Europe, but most in Canada, from the Atlantic coast to the Northwest Passage and everywhere in between.

Ian has been aboard many of those expeditions during the past twenty-five years. The resulting friendships with people in the Canadian Arctic and northern Europe, combined with expedition experiences, has lead to him writing songs about people and places such as Pangnirtung, Baffin Island, Torngat Mountains, northern Labrador, Sable Island and St. Kilda, Scotland.

It seemed as if every song we heard at the concert was poetry on six strings: “Where the wild river flows … as the blackbird sings … where the white pine sighs” … Every song had a story, which Ian superbly told. He told of a huge sand dune on Sable Island 350 feet high, horses pounding down out of the clouds across the marram grass, on their way to chase the resting seals into the ocean – and then you were in the moment. It was an antidote to disappointing and heart-rending current events: “Let it go; Let it all fall away …”

Ian told of experiencing the unusual music of an Innu drummer in the Torngat Mountains of Labrador, alone beside a remote lake. “You are this place” he wrote, knowing that this was the heartbeat of this stunningly beautiful place of the spirits.

Ian wrote and sang of “Angel’s Share” in Scotland, exploring the poetic nature of the sometimes dour Scots people: “She’s the iris in spring time, robin in fall … She’s got the angel’s share.”

“She’s the Air,” the song says, evoking the image of the mythical angels who take their share of the aging single malt whiskey evaporating from the barrels in the caves of the distilleries.

Ian sang about St. Kilda on the Island of Lewis in Northern Scotland. For four thousand years, people lived there, subsisting largely off sea bird harvests on this remote island. But the people left after modern interference destroyed their livelihoods. St. Kilda is a ghost town now, Ian noted, but with mysteries and new discoveries to be made over every hill.

“I’ll be home again,” he sang, thinking of the descendants. We just might “bring them home again.”

Ian has worked with students in the Arctic, teaching them songwriting. With few preconceived ideas, the students are unimpeded, he said. Their ideas are free and wide-ranging. But our visits to the north are not without consequences. We from the south, he said, offer this modern world, but the young people in the north cannot reach it. Theirs is often a life of frustration when their visitors show them the possibilities of another world, and then invariably leave them behind.

Reflecting on the problem of the Newfoundland economy, Ian described how the “bully boys” from The Rock who should have been fishing for cod are now in places like Alberta harvesting oil. Since the 1992 cod moratorium, many Newfoundlanders have had to leave their homes to make a living.

“It doesn’t matter what you say,” the song goes, “Always from away” … but the hearts are left behind on The Rock.

Ian’s song “Sunlight Girl” was lovely. It explores the notion that there are people in the world who are “light givers.” They give of themselves through political action and caring passionately about people, the environment and humanity – and they keep on giving and giving. It is our responsibility, Ian said, to give their light back to them when they wear out. Their light diminishes and then extinguishes if we don’t find a way to give their light back.

Well Ian is doing a darn good job at keeping the lights lit, and Anne Lindsay’s fiddle accompaniment on his songs makes them luminous.

Ian Tamblyn:  www.tamblyn.com will be the expedition host aboard Adventure Canada’s expeditions Scotland Slowly and Ireland Circumnavigation in the summer of 2019. www.adventurecanada.com

Anne Lindsay will be showcasing her own band at the Tranzac Club in Toronto on Dec. 10, 2018. www.anne-lindsay.com