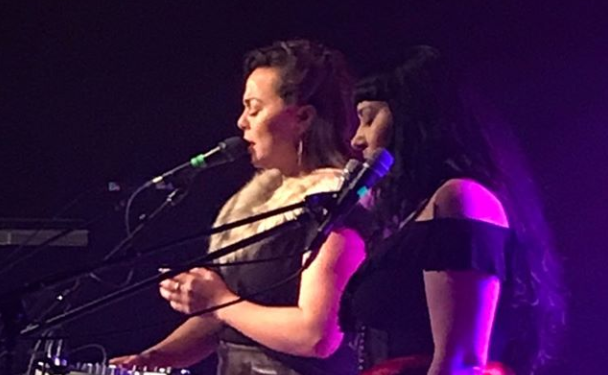 I am riding high after last night. I had so much fun and connected with some old friends and made some new ones. The truth about the folk scene is that it is full of beautiful, genuine people who do their job for little more then passion. Knowing that I am not alone in this warms my heart!!!

What would a Canadian Folk Music Awards show be without snow! Boy did it snow!! I clean my van off – yes, I drive a soccer mom van; it’s great for hauling tools and musicians. I am super excited because I am going to my favourite place in Calgary: the new library! And I get to watch one of my old friends play some songs: the uber talented super nomadic Dana Sipos. I had the pleasure of meeting her and getting to know her a bit about four or five years ago at an artist retreat in Banff. I have kept my eye on her Facebook ever since, and she has been on the road, basically the last five years. I respect her deeply as a musician and a hard worker!!

I have my own secret parking spot down near the library.  I go there at least once a week, and I have never even checked out a book! I literally drink coffee and soak in the vibe. The architecture is a masterpiece. And it’s a final feather in the city’s cap for revitalizing the dark and dirty “east village.”

I walk in, and I am about two minutes late.  (You laugh but it’s nearly impossible for a musician to be on time!)  I get there just as Kristine St-Pierre finishes her song. Dana Sipos is next, then Raine Hamilton, and then Mattie Leon. All the songs in the first round were well-crafted songs written by really great songwriters. I was really impressed. These guys seem like the future of folk to me, and folk is in good hands. The next round, Kristine sings this song in French, which I speak at least three words of, but it’s so beautiful, I feel like I understand! Then Dana is next. She has this gift for crafting songs, and she is so delicate yet so ferocious you would have to see it to believe it!! She’s just humbling to watch. Then Raine picks up her fiddle and simply owns my soul for three minutes. I literally disappear for that time. When the song ends, I say to myself, “How could this get better?” I am shocked by such a beautiful morning.

Mattie Leon is this sort of rugged looking kid, a redhead, so he already gets my favour. Before he sings, he tells this story about how he used to work at a school where he taught kids with disabilities and kids who are learning English as a second language. He tells a story about helping this eight-year-old Syrian refugee pass a test and says she was the sweetest little kid he had ever met.  Then he said that, despite all the noise on the internet, these are the type of people Canada is helping when it opens the door to refugees. Saying these types of things takes a lot of courage. Good on ya’ Mattie. This made me understand something: generally as a folk musician (and any type of artist), your more sensitive to certain things, and the job of a folk musician is to say those things and say those things loud, and over and over till people pay attention! I am proud to have met Mattie.  He is fearless about the truth! 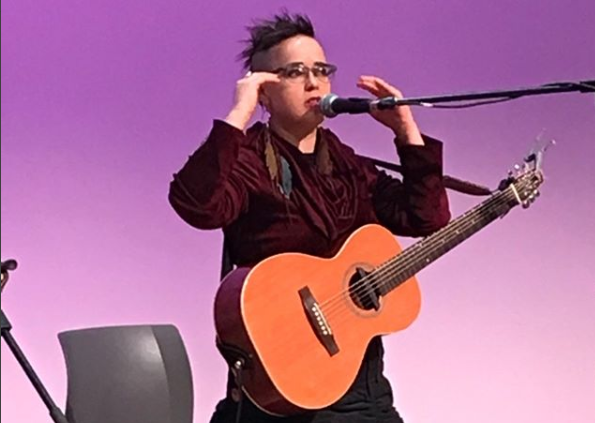 Raine Hamilton performs at the CFMA songwriters circle at the Calgary library. Photo by Levi Cuss.

Wow!!! I can honestly say that by 2:00 p.m. Saturday afternoon, my heart was filled with music, happiness, heaviness, and hope! I went home to rest up for the day, as I knew there was a big night ahead. I was looking forward to seeing new and old friends, some of whom I had seen the night before. I simply love to be around the passionate people who volunteer, the fans and especially the musicians!!

Tonight, I felt like I had to kick it up a notch! I put my best shirt and suit on, I showered and even brushed my teeth! As I walk in with my date on my arm, I see Sandra Sutter, who is up for Indigenous Songwriter of the Year. She smiles and invites us to sit with her, some of her family and her band members. Her uncle Gil is there, and he keeps me in stitches all night with his joker antics. Once again, I feel at home with my people.

Then the music starts. Annie Sumi and the Lifers are the first act: three women with beautiful harmonies, great songwritng and great stories. I was prepared for that. Then BOOM. The third song comes on, and it’s rugged and gritty and gets your body moving, and my hair is standing on end!! This makes me smile and sends me into the ether. They are absolutely brilliant! Whoever goes next has their work cut out for them!

Group after group comes out. All are different yet the same. All are simply over-the-top good – the best in their field. Winona Wilde has a voice of an angel. Jack Pine and the Fire has a blazing genre-bending rockabilly alt-country vibe. Then Quantum Tangle gets on stage; it’s looping and throat singers melded with 90s rock familiarity. It’s something you have to experience. They are truly one of a kind and my surprise pick of the night! They CRUSHED IT! 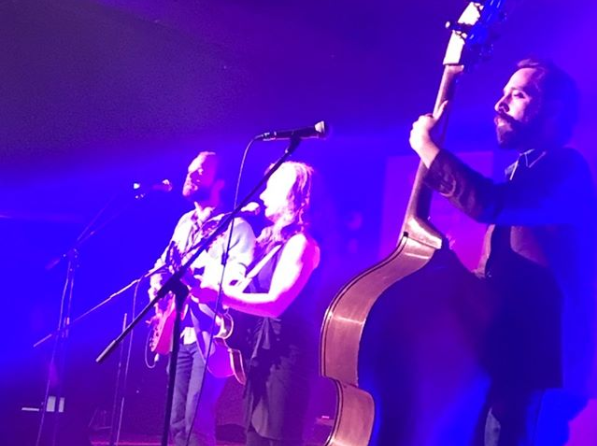 At this point it is like sensory overload. I need a break. Enter Matthew Byrne, another proper redhead, so obviously my people – but honestly, everyone is my people. He comes out doing a traditional song a cappella, so crisp, so stripped down, so warm.  It’s exactly what I needed! I am literally wondering why I have never heard of 80 per cent of these musicians.

To end the night, one of my favourites comes out: Little Miss Higgins. I was lucky enough to have spent a week with her at Hornby Island Blues Camp, where she taught a week-long songwriter’s course. She is so natural and charismatic she subtly makes you put your guard down and sucks you right into the picture she is painting!! She is as lovely on stage as she is in real life, a gem of the Canadian scene! What a way to end the night!!

What an amazing weekend – one that showcased our most beautiful, most gentle souls, our most rugged warriors, and the most relentless, heartiest people on the planet! I go to bed being a proud Canadian! Bravo Canadian Folk Music Awards 2018!