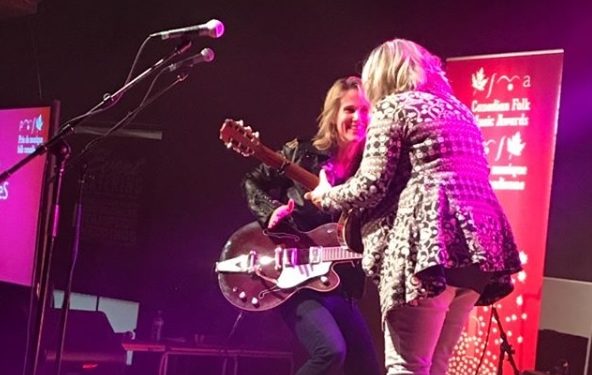 Photo:  The LYNNeS closed out the performances at the Nov. 30 CFMA gala.  Photo by Levi Cuss.

I woke up Friday morning, Nov. 30 with music on my mind. The 2018 Canadian Folk Music Awards are in town.

I am a singer-songwriter, a carpenter, and a father, but I am not an industry darling or a writer, so this is all foreign to me. I have been tasked with writing a piece on the Folk Awards.

I go for breakfast, then down to my local barber and get a proper shave and trim. I clean up pretty good for a big city mountain man. I come home and lay out my clothes: a suit jacket, a t-shirt (Carters Guitars, Nashville), a pair of jeans, and my trusty Chuck Taylor Converse shoes. They are so folk, rock and roll, and almost as iconic as Bruce Cockburn.

My mind is racing a bit. I sit on my couch thinking about who will win Producer of the Year. I have known Suzie Vinnick for a long time, and Steve Dawson has produced two of my records!  Suzie is one of those women who is so talented and yet so humble – a multi-instrumentalist whose new record wreaks of skill and confidence! Steve has produced over a hundred records in his time.  He’s a true craftsman, an ultra-talented family man, who can play guitar like the devil was in him.  He is nominated for a record he made with Matt Patershuck, Same as I Ever Have Been.

I arrive at the Southern Alberta Institute of Technology at 4 p.m. sharp, sitting in my car pouring over how I will handle certain situations, wondering who will be there and who won’t. Will I fit in? – all that normal noise in a person’s head!! I walk in and chat with the gal at the door.  She is an art teacher by day and a volunteer by night. I walk inside, and there is a dinner there, but I am too nervous to eat. I get a coffee instead and scan the floor for people to talk to. What I notice is all these hard-working, lovely volunteers. I chat with a few from all different walks of life, but they all have one thing in common: a deep deep love for folk music. This sets me at ease!!

I spot what I perceive to be some trouble-makers and quickly go sit by them. Like attracts like.

They are both from a band called The Fretless: Trent Freeman and Ben Plotnick, two band members in what I think is a five-piece but seems to be interchangeable.  We start chatting about touring and love and pain, laughing and carrying on.  These are two classy massively talented musicians who are only nominated for three awards!!! They quickly agree to letting me sing on their next instrumental album!!  I am over the moon!! As I am writing this story, I am listening to these guys. I am sad I have never heard of them but excited to know this music now!! Wow! 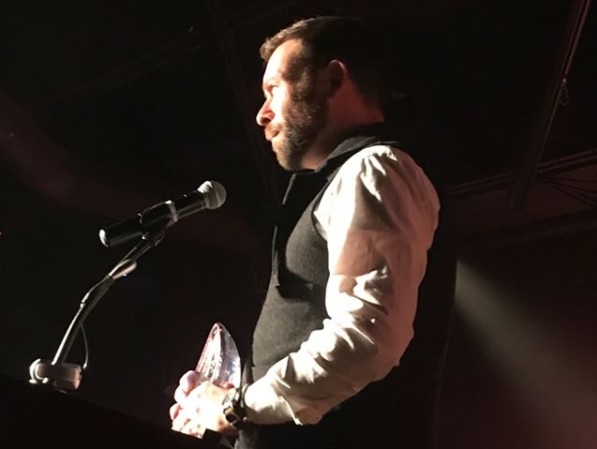 Matt Patershuk accepts Steve Dawson’s Producer of the Year award for his work on Matt’s album. Photo by Levi Cuss.

There is a line wrapped around the corner outside the venue. It’s filled with fans, musicians moms and dads and volunteers. There is excitement in the air. People say winning doesn’t matter, but I personally know the sting of defeat. I wish they could all win!! Being nominated for a Canadian Folk Music Award is a win in itself! The talent pool is shocking, simply the best of the best.

I get a seat just off the side of the main stage. I am Joined by Jordan Percival, digital marketing director at True North Records, Bonny Stairs of Citadel House and nominee Sandra Sutter. We all had a blast! Great company to hang with!

The show begins with James Keelaghan and Beniot Bourque, the hosts, and great musicians. FJames is someone I have seen play at the Edmonton Folk Fest, and he is really great – a spokesmen and veteran of the Canadian scene! Both are so talented and were funny and poignant – great hosts.

I am purposely not going through the winners, as you can see the full list by clicking HERE.

One highlight of the show where Ben Heffernan – he looks like he is 15, and he has the soul of a 70-year-old man!  High octane folk! Great Performance.

The show-stealer of the night was West of Mabou.  They basically blew the roof off the dump!!

Ok Ok, it was not a dump, but you catch my drift? Go out and catch a show. They owned my soul in about two minutes!!

Closing out the show was the LYNNeS, the dynamic duo had the crowd in the palm of its hands with well-crafted songs and harmonies that made my eyes leak. I can see why they are nominated for four awards this weekend!

I am leaving the building on such a high. So many talented people, so many new friends and so much great music!! To all the nominees and the volunteers and fans, I hope you enjoyed that as much as I did!! And see you all again tonight, for the second half!!