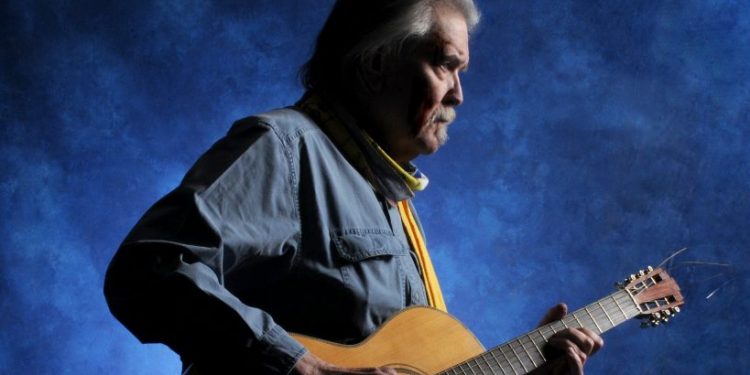 In 2007, I finally saw one of my songwriting heroes perform. The next day I mentioned to an industry friend how Guy had thrilled me with so many of his iconic tunes – songs that inspired my own journey into the world of songwriting: “Stuff That Works,” “Desperados Waiting for a Train,” “Boats to Build,” “L.A. Freeway.”

My friend had seen him perform a few nights earlier. “I got his phone number,” she said. “Do you want me to see if he would co-write with you?”

I laughed. I knew full well Guy Clark would have little interest in writing with a small-time songwriter like me. “Yeah, whatever. Knock yourself out,” I said.

She called me back the following day to say she’d spoken with Guy. He would listen to my songs.

“Send a recording to his Nashville address,” she said. I did. It couldn’t hurt. What’s that saying? Shoot for the moon and you just might hit the stars.

Seven months later, while in Nova Scotia, I noticed a missed call. I didn’t recognize the area code and had actually forgotten about the package I’d mailed to Tennessee. Imagine my surprise when I retrieved my message: “Hey John, it’s Guy Clark. I like your songs. Call me.”

I listened to that message at least 15 times before dialing. When I did, I was a bumbling idiot, speaking fast and filling any and all silence with drivel. “Hi. Mr. Clark? This is John Wort Hannam calling you back, Mr Clark. I’m in Lunenburg. It’s a UNESCO World Heritage Site. They have a great festival. You should play it. It’s a little overcast here. What’s the weather like in Nashville Mr. Clark?”

He was patient, let me finish, then slowly replied, “John, that ‘Sweet Sweet Rose’ is a pretty good song. You gonna be in Nashville anytime soon?”

I wasn’t. But I also wasn’t going to miss this opportunity. I lied.

“Actually, I’m gonna be in Nashville next week, Guy”.

“Why don’t you come over to my place for a couple days and write a song,” he said.

I booked a flight, a room at Nashville’s Best Western and a rental car. In six days I would be pulling into Guy Clark’s driveway.

Before leaving, I told a musician friend my exciting news.

“I heard Guy smokes a lot of pot,” my friend said, “You better start training.”

Instead I spent the next week pulling bits and pieces of unfinished songs out of notebooks ready to present to Guy.

I showed up at Guy’s at 10:00 a.m. sharp, took a deep breath and rang the bell. He opened the door wide and gestured me to enter without saying a word. He seemed prickly but polite enough. I immediately met Susanna. Being the muse of so many of Guy’s songs, I felt I already knew her; it was kind of like finally meeting a character from a novel you’ve read a dozen times. Guy showed me downstairs to his workshop. He was an accomplished luthier, and the guitar I’d seen him play only days before was one he’d made in the very shop I was now standing in. There it was, hanging on the wall in front of me.

Within minutes I took my place on a stool opposite Guy. There was a big portrait of Townes hanging on the wall. When I asked him about it, he said nothing at first. Then he looked me up and down and said, “So, you wanna smoke some dope and maybe work up a personality?”

Oh shit. I forgot to train.

Trying to look as cool as my songwriting hero, I nodded.

“Oh … yeah man. I’m … uh … usually baked by breakfast,” I went to say. I stopped myself, but I did want Guy to think I was like him. I took long deep drags to prove it.

“So … you bring any hits?” Guy asked. I pulled out the pieces of paper I’d brought from home. Twenty-five partial songs – ideas, bits of choruses, chunks of verses, opening lines. I had ranked them in order of strength.

I presented my best song nugget first. When I was finished my sales pitch, the corners of Guy’s mouth headed south. “Nah,” he said. I placed the piece of paper aside. I offered up Idea #2. “Nah,” he said. “What else you got?” Idea #3. “Nah.” I soldiered on. #4. “Nah.” #5. “Nah.” By the fifteenth “Nah,” I started to sweat. As the “Nah” pile grew taller and taller, I felt smaller and smaller. I was literally shrinking in front of my songwriting hero. I could barely see over the bench by the time he muttered his final, “Nah.”

My face felt hot. I could feel the THC coursing through my veins. I was high. Really, really high. I got paranoid. Guy was on to me. He knew I was a fake. “He ain’t a songwriter. He just rhymes every second line,” I heard him thinking.

We looked through the ideas again and decided we would try and write around a phrase I’d heard an old farmer say: “Life’s a whole lot simpler when you plow around the stump.” We voiced a few ideas and threw some lines back and forth. Guy would start each time by clearing his throat and then reciting what he had just penned. “Ahh, that’s great,” I would say, trying desperately to write the next line, wanting so badly to show Guy that I had something to offer. But each time I’d throw a line his way he’d look at me and say, “…Hmmm.”

By 3:00 p.m. we had nothing that even closely resembled a song. I had my eyes closed for most of the session, partly due to being super high but also because I found it hard to look Guy in the face after feeling that I had failed him, and myself, so badly. I was aware of how much Guy did not suffer fools, and I felt like I was the biggest one he’d ever met. I kept hoping I would open my eyes and be back at home, on my couch, sitting with my wife.

When I got back to my room I phoned her. I knew she would eagerly be awaiting an update. She was so excited for me.

“It didn’t go well,” I said. “We smoked a joint, and I got really high, and Guy didn’t like any
of my ideas, and I think he thinks I’m an idiot and a fake.”

As always, in perfect Jenny style, she gave her support in two stages. Stage 1: “I’m sorry you’re feeling this way and doubting yourself. There’s still tomorrow. You are a good songwriter.” Stage 2: “You idiot. You know you can’t smoke dope. Tomorrow, don’t smoke dope. Promise?”

The next morning I found my seat across from Guy. “You wanna get high?” he asked. “Don’t do it,” I said to myself. “Be strong. You’re cool. Just tell him that you work better with a clear head, and that you came a long way and would love to have something to show for it.”

I looked him straight in the eyes and said, “Yup”.

ARRGGHHHH!!! I couldn’t do it. I could not tell Guy Clark that I couldn’t smoke pot with him. How could I miss the opportunity to own that story? The one about the time I got really high at Guy Clark’s house and we co-wrote that epic hit song that he went on to record, and if you look right there on the album liner notes you’ll see it says, “Written by Guy Clark and John Wort Hannam.” What a dream, and Jesus Christ, think of the royalties!

In the end, there would be no royalties. There would be no song. We spent most of the day staring at the blank 8.5 X 11” pieces of paper sitting in front of each of us. Around noon Guy asked if I was hungry. “Starving,” I said.

He disappeared upstairs and returned with a box of saltine crackers, a plastic bottle of yellow hotdog mustard and a bag of pre-shredded cheddar cheese. He placed a handful of crackers on each of our blank pieces of paper, squirted a shot of mustard on each cracker and sprinkled cheese over the whole lot. He slid the paper toward me. “Dig in”, he said.

We pretended to try for another hour or so then gave up. Guy seemed frustrated. I was certainly deflated. I knew I had blown it. We mangled together a chorus from the few lines we had written, and he told me to sing it into a tape machine and then he sent me on my way.

Back at the hotel, standing in front of the mirror, I could see the dried yellow mustard caked around the corners of my mouth. This is the image Guy Clark would remember me by.

Years later, when I heard Guy had died, I thought about that unfinished song, probably still buried on his tape machine somewhere in his workshop. I dug out one of my old writing journals and found the piece of paper that had doubled as a snack tray.

There are no words on it but the yellow mustard stains and cheesy grease spots certainly tell a story.

I learned some important lessons that day: 1.) If you have never co-written before, don’t start with one of your songwriting heroes. 2.) Don’t put your heroes on pedestals. I killed that writing session because I went in with the attitude that I couldn’t possibly have anything to offer Guy Clark. I didn’t believe in myself, or as Guy would say, “I didn’t trust my cape.” Guy saw me as a colleague worthy of a listen, worthy of a phone call, and worthy of an invitation. I just saw myself as not worthy. 3.) People will eat almost anything when they’re high.

Guy Clark is sadly missed in this house. I miss looking forward to his next record. When the love of his life died a few years earlier I remember thinking, “I bet Guy will follow soon.” They seemed like the kind of couple that couldn’t breathe without each other.

I wish I had gotten a song with Guy Clark, but the story is pretty good.

Venus Talks: a conversation with Tamar ...