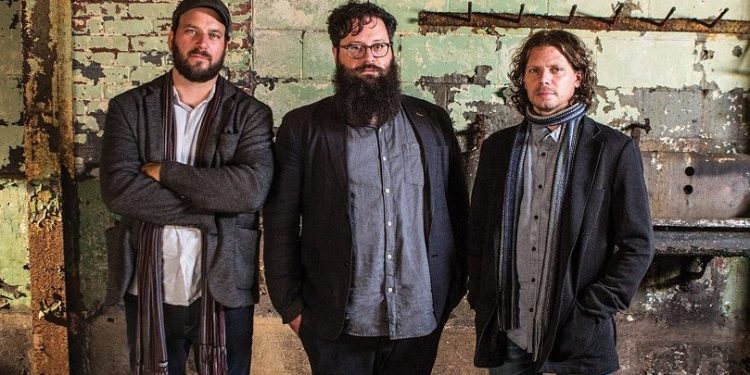 They’re back! And, they’re better than ever.

Quebec power trio De Temps Antan had a recent shakeup with fiddler André Brunet moving on, only to be very ably replaced by David Boulanger, another fantastic master of the Québecois “violon.” Yes, his style is a little different, but the joyful fun of this terrific music comes through in spades in this fabulous recording: Consolez-Vous.

This new incarnation of De Temps Antan has already been recognized within professional circles. Éric Beaudry, Pierre-Luc Dupuis and David Boulanger have justifiably been awarded the 2018 Félix Award for Traditional Album of the Year.

This recording takes us on a journey from the past to the present, old meeting new, from soft ballads to energetic accordion and fiddles. It’s a trip.

Accordion, jaw harp and harmonica player Pierre-Luc Dupuis is the centre man of the trio, an explosive and effervescent live entertainer. Éric Beaudry keeps the group rock steady with his stellar guitar and bouzouki playing. David Boulanger provides the exciting fiddling heart of the melodies. All three performers use their unique voices singing the call-and-response songs and the “turluttes” – the uniquely traditional Québecois songs without words. And, all three musicians excel at the distinctive foot percussion that makes the music drive at 100 kilometres per hour with the use of no fossil fuels.

“De Temps Antan,” when spelled “de temps en temps,” literally means “from time to time.” It’s a great double entendre because, spelled the current way, it can also mean “from olden times” or from one era to another. Whatever you take it to mean, it’s a great name for a band that brings traditional music from another age into the 21st century.

On this new album, we find traditional call-and-response songs artfully arranged, sometimes with traditional tunes and sometimes with newly-composed fiddle or accordion breaks. We also find original compositions from the band members. And, several highly respected musicians from the trad community of Québec make guest appearances on this recording.

It goes without saying that De Temps Antan is a hugely talented trio of trad stalwarts. All three members of the band grew up in musical families and have played at various times in the Québec big band supergroup La Bottine Souriante. [That was the band that blew us all away in the 2010 Vancouver Olympic Games closing ceremonies.] All the guys have played in a number of other renowned bands in the vibrant Québec folk music scene. They are energetic and vivacious performers. You might say the only thing better than listening to De Temps Antan’s recordings is seeing their live performance, but if you can’t get to a stage show, you’ll be very happy with the CD.

It’s no accident that the English language has adopted the phrase “Joie de Vivre.”  It’s the French philosophy of living life to the fullest.  De Temps Antan brings that joie de vivre to our ears. This album is a celebration of life, a celebration of the music that links generations. Whether your French is barely passable or totally fluent, you’ll love this approach to creating happiness.