A rogue update from the Rogue Folk Club 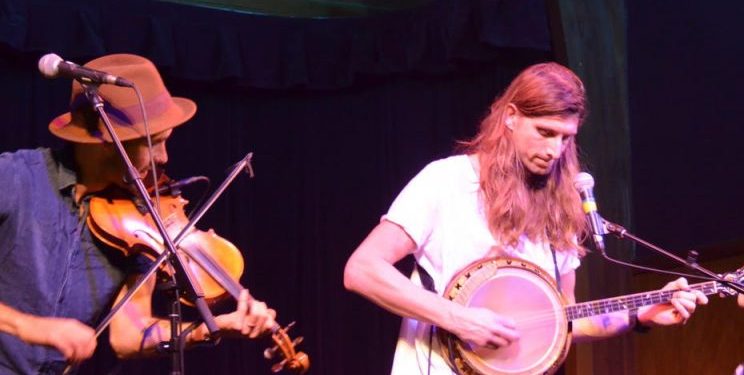 The East Pointers at the Rogue.

What an incredible month of October we had at the Rogue Folk Club in Vancouver! I don’t just mean weather-wise either. There were some truly wonderful concerts at the Rogue – and elsewhere around town – all month long, and, despite not being able to make it out to Cape Breton for Celtic Colours this year, I still managed to tune into the concerts on the live stream.  Such a treat!

The month kicked off with a chance to see folk royalty at the Vogue; Judy Collins and Stephen Stills put on a fabulous show, and I got to meet them backstage too. (My reward for interviewing Judy on my radio show the previous Saturday, I guess.) This may have been the last Vancouver show for these two legendary artists, and they didn’t disappoint. Stills’ speaking voice may have been a bit wobbly at times, but he sang really well, and his guitar playing was as excellent as ever. Sweet Judy Blue Eyes herself may be about to reach three quarters of a century, but she can still hold those high notes! I swear I saw angels dancing on the curtains when she sang “Who Knows Where the Time Goes?”  Maybe one was Sandy Denny herself. Who knows, indeed!?

The next day we presented American blues master Guy Davis, accompanied by Italian harmonica wizard and blues scholar Fabrizio Poggi, at St. James Hall. Guy was delighted to meet an old friend of his parents, Ossie Davis and Ruby Dee from the days of the Civil Rights Movement. Jack O’Dell now lives in Vancouver and was brought along as a guest of the show’s sponsor, Tom Nesbit. The concert was a tribute to blues legends Sonny Terry & Brownie McGhee and was stunning.

There was no let-up at The Rogue after that either. Three days later we presented the Vancouver debut of the Galway quartet We Banjo 3: two pairs of brothers whose new CD, Haven, roared to the top of Billboard’s bluegrass charts in its first week of release in September! Hardly a bluegrass band, they played some spirited instrumental sets and trad and original songs – most notably perhaps, young singer David Howley’s plea for understanding of those like him who are facing depression and mental illness.  It was called “Don’t Let Me Down.” The band might employ some flashy, occasionally clichéd, musical tricks, but they are wonderful players, excellent singers, and totally charming guys. We’ll definitely bring them back!

The next night American bluegrass diva Claire Lynch made her Vancouver debut, with three superb young men from Ontario backing her up. Shane Cook is one of Canada’s most celebrated young fiddlers (I heard at least two musicians on the Celtic Colours live stream that week crediting him with tunes and inspiration!) and the mandolin and bass players were equally amazing! What a show that was! Too bad we didn’t get a few more people to come along, but I am 100 per cent certain everyone there will bring a friend or three next time.

After a brief day of rest, we were off to West Van’s Kay Meek Theatre to witness Steve Dawson and company paying tribute to the late Joe Cocker‘s remarkable live LP, Mad Dogs & Englishmen. They just changed it to Mad Dogs & Vancouverites and brought along New Brunswick bluesman Matt Andersen to join the fun. His voice is remarkably similar to Cocker’s, and he was in fine form, but the showstopper was Roy Forbes; the visually-impaired singer delivered a couple of memorable torch ballads and received standing ovations each time.

Another day, another stellar band at The Rogue: The Fretless graced St. James Hall with their scintillating string quartet renditions of trad Celtic medleys and original tunes the very next day. They were joined by the angelic voices of Vancouver’s Twin Bandit on a couple of songs, and the opening act – PEI’s Rachel Beck – was equally sublime. There was a full house too. Most gratifying! 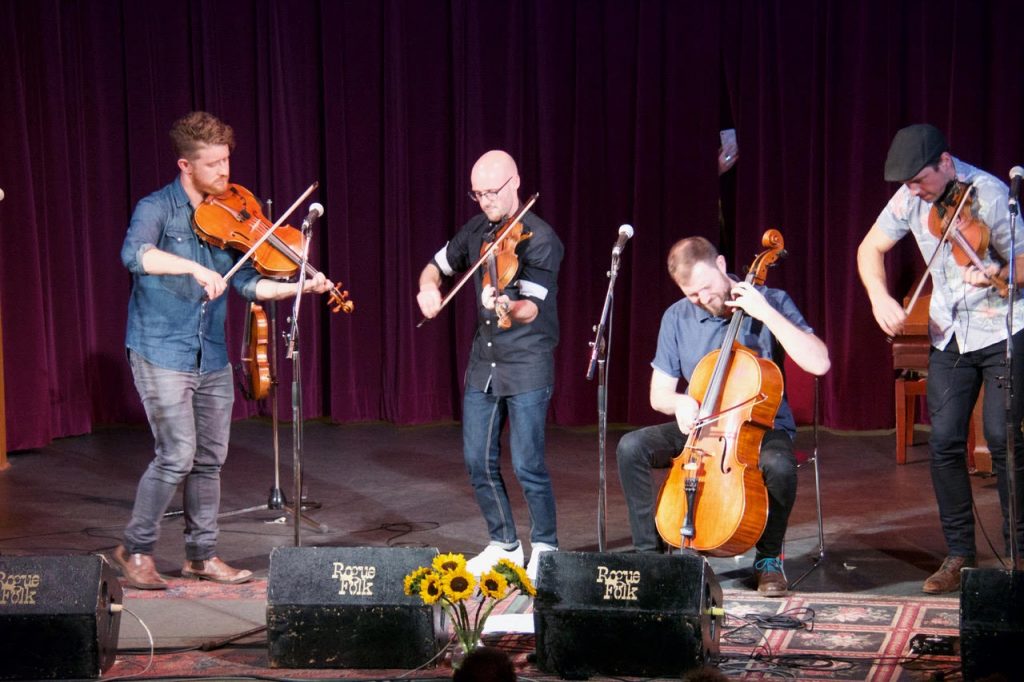 The Fretless at the Rogue.

The pace dropped a wee bit, with almost a week before the next show: PEI’s The East Pointers. It was another sold-out show and another stunning performance, with some of the finest tenor banjo I’ve ever heard (Koady Chaisson) with his brother Tim on fiddle and vocals, and guitarist Jake Charron excelling on their original tune sets and gorgeous songs. The show was filmed by Hubcast Media for broadcast on the new TV show, On Stage, on Joy TV (Telus channel 123, and, I think, Shaw channel 11 in Vancouver) at midnight PT on Saturdays. If you miss the show, you can stream it later on onstagelive.tv. They’ve already aired two Rogue concerts in the first month’s broadcasts: Jim Byrnes and Russell deCarle.

Two days later we were at it again! Newfoundland singer Matthew Byrne is – for me – Canada’s finest trad singer, and he was in excellent form. Hailing from a singing family on the Rock, Matthew has a unique treasure trove of songs collected in various outports and from Memorial University’s extensive library. While many of the songs are related to trad songs from Ireland, and even England (!), the versions he has found are wonderfully unique!

A fundraiser for the Stephen Lewis Foundation

A few days later we hosted yet another PEI-based singer, Wexford-born Irish Mythen. What a voice!! She took us from the heights of hilarity to the deepest poignancy with her original compositions covering everything from the Magdalen Laundries to love, loss, murder, and the vagaries of living abroad (her “Jesus” song was once requested by a Swedish Archbishop; it’s not exactly reverent, but he insisted she stand up on the pulpit in Gothenburg’s cathedral and sing it at Mass! Only someone as courageous and powerful as Irish Mythen could have pulled this off! All the more amazing considering she’s only around five feet tall, but with a voice that can fill any room – or folk festival field. In fact, she delivered Dominic Behan’s “The Auld Triangle” off the mic as an encore. Unbelievable!! And fabulous! She’ll be back. Everywhere else on her tour she played in cities where she had previously played a local festival. All these shows sold out. This was her first time in Vancouver, and next summer, she’ll play the Vancouver Folk Music Festival, so book your tickets early when we announce her return engagement next fall!

November kicked off with two more sold-out shows at the Rogue: Newfoundland’s The Once and a fundraiser for the Stephen Lewis Foundation, which supports African grandmothers as they raise their grandchildren, whose parents have died from AIDS. Fraser Union delivered the best set I’ve ever heard from them, and the evening ended up with Karla Mundy, Dawn Pemberton and Brian Tate (aka TriVo) singing some truly stirring soul, gospel, and Cuban and African-American anthems. 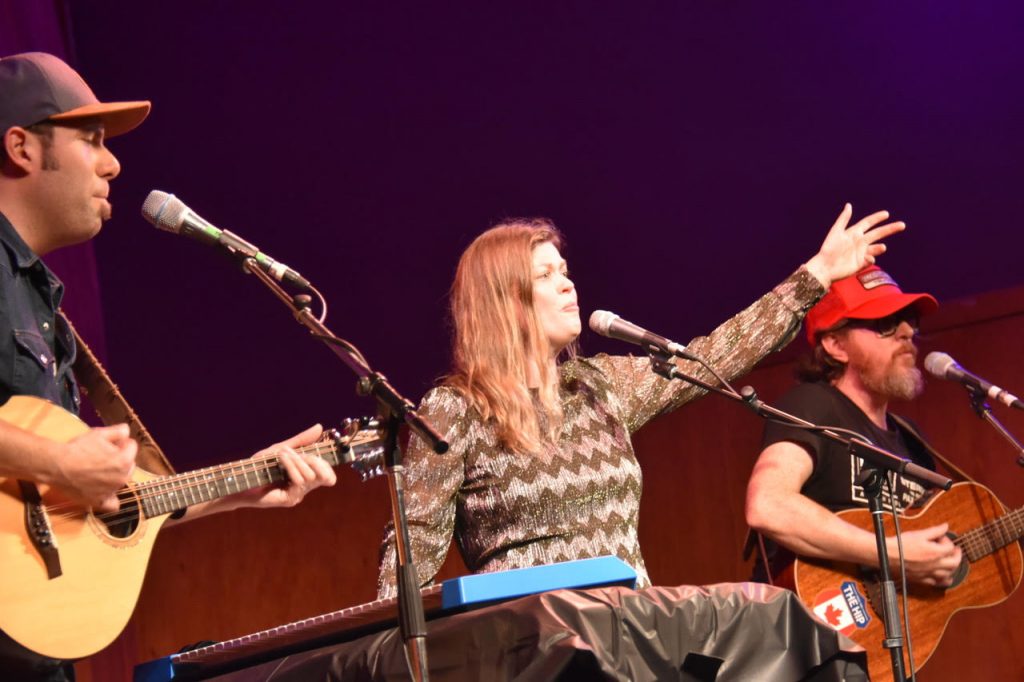 The Once at the Rogue Folk Club.

Coming up at the Rogue

The Rogue beat goes on this Thursday, Nov. 15, when you can catch Saskatchewan’s Kacy and Clayton opening for The Deep Dark Woods at the Biltmore Cabaret. I liken their music to that of early Jefferson Airplane and Fairport Convention: very folky psychedelia with heaps of traditional references, great vocals, and fabulous guitar work!

The following night, Winnipeg duo The Small Glories return to the Rogue. Cara Luft was a founding member of the Wailin’ Jennys and was raised in a household where Steeleye Span and Led Zeppelin‘s folk blues roots were staples of the home stereo. Since leaving the Jennys she’s teamed up with singer-songwriter JD Edwards, and the duo were a big hit at the Mission Folk Festival in July. They have played at the Rogue before, of course, and they may well have a new CD with them this time. They will most definitely have lots of new material, with their wonderful harmonies and socially-conscious lyrics — and quite a few singalongs – guaranteeing a great night out! To make it even more enticing, Norah Rendell (formerly of Vancouver’s Cleia, and of the pan-Celtic quintet The Outside Track) brings her new trio The Lost Forty to share the bill. She’s a glorious singer and flute player, and her studies at the University of Limerick’s famed school of traditional Irish music – together with her husband, Brian Miller‘s, considerable repertoire of songs he’s collected in the mining and lumber camps of his native Minnesota – give their brand of roots music a unique flair.

Wait.  The Beatles are folk?

In other news, it was fifty years ago, today! Well, Nov. 22, 1968 to be precise. That was the release date of The Beatles’ White Album, the double LP that was the Fab Four’s follow-up to Sgt. Pepper’s, and which came on the back of their two month sojourn in Rishikesh, India studying meditation with the Maharishi Mahesh Yogi. They had come back armed with heaps of new songs and a determination to get back to their best days as a rock and roll band. They had released two major hit singles that year (“Lady Madonna” and “Hey Jude”), and the cartoon film Yellow Submarine came out over the summer. On Nov. 22, 2018 some 30 or so of Vancouver’s finest and most innovative musicians and singers will mark the anniversary with a very special concert at St. James Hall. They will perform the 29 songs from the album in sequence, putting their own distinctive stamp of interpretation on those classic songs. The show is sure to sell out, and tickets are going fast already. Proceeds go to support the Performing Arts Lodge in the west end, where retired musicians, actors and arts professionals can find a haven of affordable housing. I’m honoured to have been asked to MC this event!

Full details for all these concerts can be found at www.roguefolk.com

Don’t forget to tune in to The Saturday Edge On Folk on CiTR FM 101.9 in Vancouver and www.citr.ca every Saturday from 8 a.m. to noon PT for the best in Celtic, folk, and roots music – and yes, I do count the White Album as Roots!