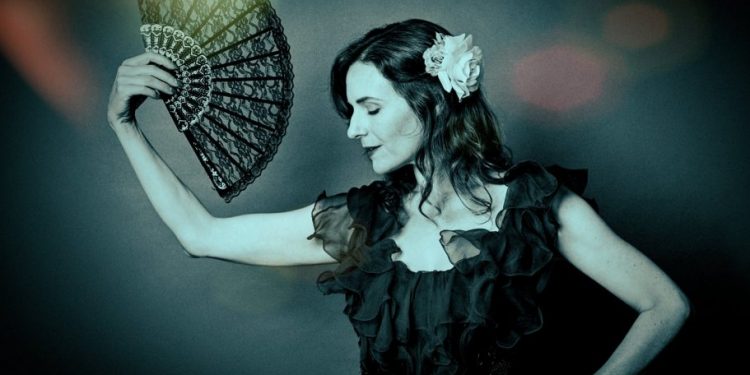 Singer-songwriter and fingerstyle guitarist Kristin Sweetland has chosen a novel way to release her brand new album.  It’s not actually an album at all in the traditional sense of the word.  Nor is it an EP.  It’s a series of four trilogies, three-song song cycles that will be released throughout the year, culminating in the fall with a vinyl release of the full collection of songs.  And, in fact, I should probably scratch that word “song” too.

These numbers are all instrumentals, following in the footsteps of Kristin’s last album, The Adventures of Captain Dirt and the Skirt, with Lyndell Montgomery .

Trilogies Part 1 comes out today, and I spoke to Kristin about the project via email.

RMC: People said long ago that the advent of digital distribution would be the end of the “album,” as people would be free to release their songs in any configuration – and yet we haven’t seen too many people deviate from singles, albums and EPs.  What made you decide to release these songs three at a time?

KS: The “trilogies” concept for me was more of an artistic inspiration than an orchestrated plan. I have always enjoyed using mythological elements in my songwriting, and the number three has a special place in mythology, fairy tale and traditional storytelling structure. Every tale must have a beginning, middle and an end. Thus, so does each of my sets of songs. On a more practical note, when I was contemplating making a new album the thought of writing a ton of new songs and recording them all at once felt a bit overwhelming to me. However, the thought of writing and recording three songs sounded really fun. Doing it this way was a little present to myself and a way to get the project going.

RMC:  Is this a business decision, an artistic decision, or both?  If business plays into it, are you willing to share your strategy?

KS: At first, it was an artistic decision, but I am seeing more and more ways in which it could be good for business as well. It has already gotten a good conversation going in the community about how we should go about releasing albums in this day and age. I personally think it comes down to what feels best to the artist and serves the goal of their artistic vision. It excited me to think of continually having new things to send out into the world over the course of the next year, instead of releasing it all at once and having it just be over. I wanted to prolong the fun. As well, my hope is that each release will help me build up momentum and that I can increase interest in the project by the time I release the Trilogies compilation on vinyl next fall and head off on tour.

RMC:  What made you decide to continue down the instrumental road with this album?

KS: I think the answer to this question is also personal pleasure. I had so much fun making the Adventures of Captain Dirt and the Skirt, and I still love putting the album on and listening to it every once in a while. This might partly be because it is instrumental. There’s always something slightly disconcerting about listening to one’s own voice coming out of the speaker, regardless of how good you might sound. Ha! I decided I wanted to write songs that I would enjoy listening to on my own. I and do. As well, I am quite interested in honing my skills as a multi-instrumentalist and another instrumental album provided just the opportunity.

RMC:  You’ve said that this trio of tunes is inspired in part by climate change.  Many people would feel the need to express themselves lyrically when writing about such a menacing topic.  How did you seek to convey your feelings through the music?

KS:  The songs of Trilogies Part 1 were inspired by many things, but first and foremost, a deep appreciation for the natural world. I spend a lot of time in the woods and on the water and have seen firsthand the changes happening in the ecosystems I frequent. This, along with the increasingly dire predictions of scientists and climate change specialists, has thoroughly relit the fire of environmental fervor within me, and I feel compelled to find ways to communicate this in my art. Rather than focusing directly on the menacing aspects of this topic, I think my job – both as a musician and visual artist – is to find ways to remind people of the preciousness of nature, its beauty, its power and its magic. Through this reverence and appreciation, I hope to also inspire a sense of urgency in what it is we have to lose, if we lose it all.

Musically, I first sought to address the appreciation aspect of this topic, but every good story must have an antagonist and something to overcome on the journey. These themes of challenge are represented melodically in the songs and supported though the arrangements and instrumentation. Although each tune has its own specific elaborate meaning for me personally, I recognize that not everyone is going to hear the same thing I am hearing. This is the beauty and challenge of telling stories through instrumental music and one of the reasons why it’s also fun to talk about it. However, I love the idea of listeners coming up with their own ideas and stories for the songs as well. They don’t have to be the same tales that I am telling.  There are infinite possibilities.

RMC:  The musical influences in these three pieces alone are incredibly diverse.  I can hear bits of folk, jazz, Celtic, Spanish, Eastern European or maybe a bit of Russian.  What inspired these compositions?  What were you listening to that might be coming through in these tunes?

KS:  Good ear! I was most definitely inspired by a multitude of musical genres, stories and cultural histories in the composition of these songs. I have always had a bit of Celtic influence in my fingerstyle guitar playing, which tends to come through as part of my Sweetlandish sound. I have also found myself listening to quite a bit of Spanish Celtic artist Carlos Nuñez lately. He played a magnificent show at Koerner Hall in Toronto this year with one of my other favourite artists, viola da gamba player and classical music superstar Jordi Savall. Together they bridged ancient music with more contemporary Celtic and Spanish sounds in a way that was incredibly inspiring to me. As well, señor Nuñes’ extreme proficiency on the whistles encouraged me to pick up my recorder from childhood that I had just found in my parents’ basement – and remind myself how to play it. This somewhat hilariously but fantastically led me to compose most of the melodic parts on the recorder first, later creating the guitar parts to match.

As for the Russian, the second song, “The Ice Palace,” was partially inspired by one of my favourite scenes in classic film history. In the 1965 version of Dr. Zhivago, Yuri returns to his abandoned childhood estate in Varykino only to find it covered in a thick layer of snow and ice, both inside and out. Strangely, I had a similar experience while on a writing retreat last winter. I rented a cottage in the woods near Lake Huron only to arrive on snowshoes in a snowstorm to find it below freezing inside – and covered in a layer of frost and ice! I nearly cried. But I did get a song out of it. Coincidentally, at the time I was reading an epic book by Edward Rutherford called “Russka,” a fictional story that spans 1,800 years of Russian history. With all the Russia-related news in the media at the time, I was curious to learn the whole history of the country and how it came to be the state that it is today. I learned tons of historical information but felt the book was missing a distinctive female voice to properly tell the story from a woman’s perspective. This might subconsciously be why I felt compelled to add some vocals towards the end of the song – a solitary female voice. I wanted it to sound like she was singing at the other side of the castle and that somehow through her voice she could make the ice melt. The majesty of the “ice palace” scene in Dr. Zhivago intensely captured the attention of my photographers’ eye, and I wanted to learn more about how the set was created. Turns out the whole thing was filmed in Spain in the summertime. Thus, the castanets were a little inside joke. I’ve also been diligently studying classical Spanish dance and flamenco for a number of years now and wanted to put my skills to good use.

A rogue update from the Rogue Folk ...