A western Canadian tribute to Newfoundland icons: Buddy Wasisname and the Other Fellers 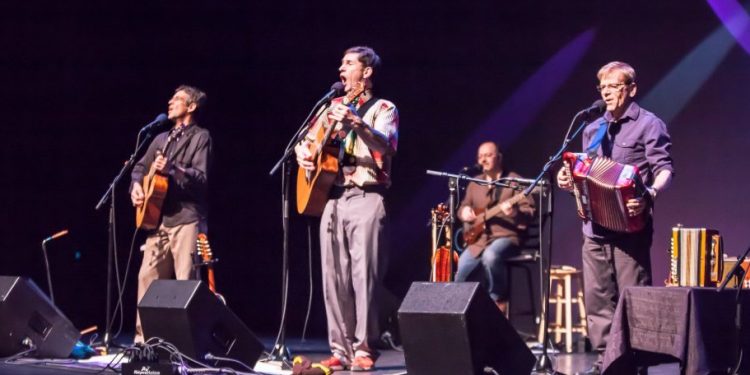 What I should say is this was the first time I heard them play live. I was about 15 years old and one of the most anticipated concerts ever to play my small hometown was about to roll into town.

Now that’s really not saying much considering we were a small mining town of about 3,000 people north of the sixtieth parallel. It’s not like The Beatles or The Rolling Stones had ever rolled through town.

The small mining community, like most of its kind in the north, was filled primarily by transient workers – people who planned to stay only a short while, bank a few paychecks and then head home again. A large percentage of those people were from Newfoundland.

So who were the big-ticket entertainers rolling into my small hometown? None other than Buddy Wasisname and the Other Fellers! Still don’t recognize the name? Well I’m guessing you’re not from Newfoundland then.

Seats sold out quickly, and alas, I didn’t have a ticket for the performance, which was to be held in the community gymnasium in my hometowns recreation center. However, I did have a plan. I took up a seat on the steps outside the emergency exit doors next to the gymnasium stage.

The magic of Buddy Wasisname and the Other Fellers’ downhome, east coast music show burst from every nook and cranny of that gymnasium. Sitting on the steps outside with the emergency exit door cracked open, my toes were tapping along to the magnificent fiddle and accordion sounds of Ray Johnson, which transported this teenage Yukon boy directly to the rocky shores of Newfoundland. Wayne Chaulk’s guitar playing and songwriting skill immediately planted images in my mind, letting me see exactly what that rocky piece of Canada that so many of my friends parents raved about looked like. Kevin Blackmore’s personality and comedic sense was on fire as I laughed out loud at his jokes and skits along with every single person who was inside the gymnasium.  He had the entire crowd rolling with laughter.

That was the night that I fell in love with Buddy Wasisname and the other Fellers along with Newfoundland, a part of Canada that I have never visited but where I feel as if I belong.

For over 35 years Buddy Wasisname and the other Fellers have provided a respite for anybody who may be feeling lost or homesick for a place and a way of life they have had to leave behind. I don’t know of any other entertainers who have embraced and celebrated not only being Canadian but being Newfoundlanders more than Buddy Wasisname and the Other Fellers. For those transplanted Newfoundlanders who find themselves spread across this great country of ours, Buddy Wasisname and the Other Fellers always bring a little piece of home with them – a little something familiar. Whether it is Wayne’s nostalgic songs or Ray’s traditional squeeze box toons or Kevin’s hilarious comedy routines, there is always a little something for everybody in a Fellers performance – something that can entertain any generation of Canadian, as you often see entire families in the crowd smiling laughing, and reminiscing with each other, mother with daughter and father with son.

While they are winding back their large cross-Canada tours going forward, the Fellers assure us they are not retiring. They will continue to perform and tour around Newfoundland, and they will still be coming out west once in a while, which is comforting to this Alberta fan – this Alberta fan who hopes he hasn’t missed his opportunity to expose his own son to the kind of east coast, small town, variety and comedy show that Buddy Wasisname and the Other Fellers have become famous for. That Newfoundland love.