Listen to The Maple City’s “Come With Me,” first single from Brief Golden Age 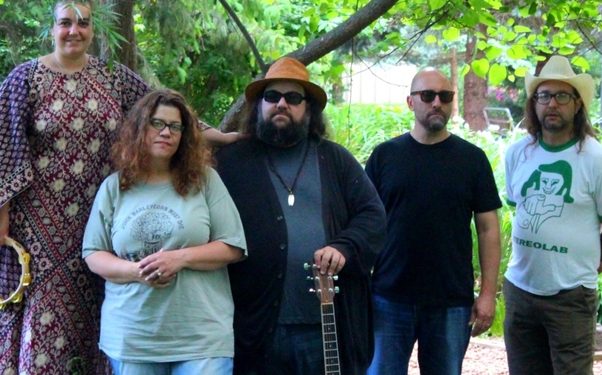 Sharing its name with the moniker bestowed upon its hometown, Chatham, Ont., The Maple City is a roots rock collective led by singer-songwriter Jason McFadden. The band’s debut album, Brief Golden Age, is indeed a reminder of a time many of us long for when music was made in an honest, spontaneous way by a tight-knit group of friends. We’re proud to present the album’s first single, “Come With Me,” which beautifully showcases The Maple City’s ragged-but-right approach.

The connection between Jason and his principle cohorts dates back to the 1990s scene in nearby London, Ont., when Jason and bassist Dennis “Easy” Reissner were members of local indie heroes Square Root Of Margaret, and guitarist Steve Wisemen was part of Champion Sprout with renowned producer Andy Magoffin. Jason’s indie credentials extend even further to the time he spent in Brooklyn working at Shimmy-Disc Records (founded by U.S. indie legend Kramer), which released a string of influential records by the likes of Bongwater, Daniel Johnston, Ween and Gwar. Jason brought that experience back to Canada, where he created the label 5th Beetle Records, which ended up releasing the 1996 debut album by American rapper Princess Superstar. In another unusual twist, Kramer applied his mastering skills to Brief Golden Age, bringing things full circle for Jason.

“I had never really imagined being in a band, even though I’ve worked with bands, in various capacities, over the years,” Jason said. “When I left Square Root Of Margaret, I felt like I was pretty much done with music as an endeavour, but I kept writing songs. Songwriting seems to come naturally to me. It’s kinda the only thing I feel okay at.”

Jason wound up living in an abandoned century-old church rectory in Chatham, where many bodies had laid in state in what is now his living room. Brief Golden Age is essentially a reflection of how Jason sorted out his life there—aided by copious amounts of wine—and he now recognizes the therapeutic value of making the album.

“I refer to that period as a phase of low impulse control,” he said. “I had a lot of fun for a while, until things went dark. Most everyone on the record got dragged through the whole mess, but we came out the other side.”

The songs grew out of regular weekly jam sessions at the church, and recordings began taking shape until a catastrophic flood hit. Things resumed at a studio called EyreSpace run by Bob Hiltz, and after 12 songs were completed, Jason and Bob did the mix before sending it off to Kramer. Jason admits that the songs grew out of things that were happening in his life mixing with whatever he was listening to at the time, whether it was Van Morrison or Belle & Sebastian. However, lyrically, he said, every track on Brief Golden Age tells a unique story.

“I wanted to open the record with ‘Come With Me’ because it’s all about that antsy feeling of being stuck in a rut, and wanting to break free,” he said. “Also, that feeling of a new relationship, the excitement and anticipation, with a little acknowledgement of not knowing where things will land.”

There’s certainly a lot of history embedded in The Maple City, but listening to Brief Golden Age, one mainly just hears the sense of new discoveries and opportunities. As Jason sums up quite brilliantly, Chatham is whatever, but The Maple City can be whatever we make of it.

For more, go to bandcamp.com/themaplecity.