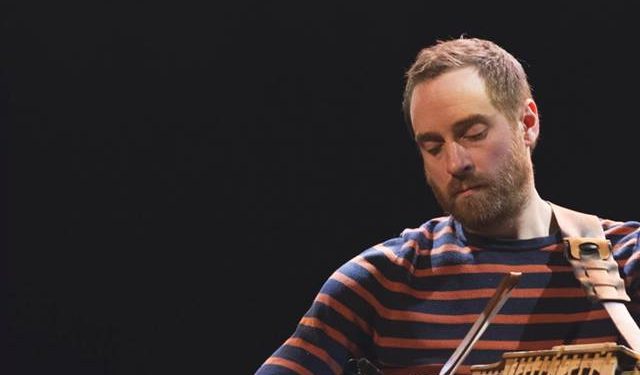 Music is poetry and poetry is music. This much is entirely evident in the recent work of Montreal’s Jean-François Bélanger, the multi-instrumentalist author of this CD, Les Entrailles de la Montagne.

Loosley translated, the title means the entrails of the mountain, the innards, perhaps something close to the roots of things that are millennia old. And, with its use of ancient instruments from Scandinavia, this recording evokes just that.

Les Entrailles de la Montagne is the second in Bélanger’s mated pair of recordings featuring his own compositions celebrating Scandinavian instruments and the influences of the music of that region.

It’s a style of music somewhat foreign to our western ears, perhaps conjuring the dark side of the natural world. The ideas invoke steaming magma bubbling up from the unconscious, bringing forth some musical force that has irrevocably pulsed within us since the beginnings of time.

Bélanger’s work sometimes makes you feel a bit like you are wearing someone else’s shoes by mistake: comfortable, but slightly unsettling. But, if you loved the Rohan theme from Lord of the Rings, that’s a point of entry into this music, and then these melodies will take you much, much further down a vivid, technicolour road.

Each track on the album is accompanied by Bélanger’s poetry in the liner notes. Instead of being merely a CD of cool tunes, Les Entrailles de la Montagne becomes a singular work of art when you listen and read as one.

We hear tunes with obvious Scandinavian origins, like “La Tiraille,” but then there are others with influences that perhaps sound more like Indian ragas.  There are tunes with weird time signatures and rhythms; tunes that might well have come from another planet entirely. It makes for fascinating listening.

The sheer mastery of these unusual instruments is astounding. Bélanger plays violin; hardanger fiddle; nyckelharpa, tenorharpa, and kontrabasharpa, [the keyed fiddles of Sweden); baritone violin; sitar; gongs; glockenspiel; bouzouki; tubular bells; banjo; harmonic flute; oud and concertina, as well as perhaps a dozen or more other unusual instruments on this stellar recording. Twenty-five years of mastering his art has lead to this work; the time spent shows magnificently.

Bélanger’s stunning mastery of the instruments here is evident, but he’s not alone. He has enticed some of the best musicians in Quebec to join him. Our guess is that they didn’t have to be asked twice.

The CD explores concepts like water, nighttime, forgetting, tears, a stroke of winter, voyages, routes, hearts, and destiny.  The following piece of poetry (my translation), accompanies the final track on the album: “Horreur Boréale.”

In the Boreal blackness