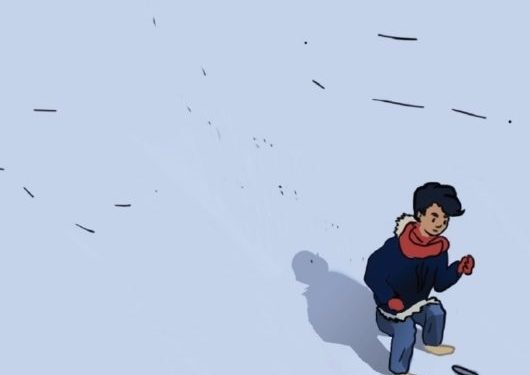 Fans of Ben Sures first heard the story of Leo Day in Ben’s song “The Boy Who Walked Backwards Through the Snow” on his brilliant album Gone to Bolivia.

Now, Ben has recounted the story again in the form of a children’s book called The Boy Who Walked Backwards, published Oct. 22 by the Manitoba First Nations Education Resource Centre and illustrated by Nicole Marie Burton.

It’s the story of a boy who successfully escaped from residential school, and it is a rare story of a residential school survivor that comes with at least a partially happy ending – though I say “partially” because we’re not told what happened to the children who didn’t walk backwards through the snow.

“I love a children’s story where the hero you identify with uses the resources at their disposal to get out of a bad situation,” Ben told me via messenger. “I love that kind of message, the self-reliance and that you can figure out what you need with what you have. You don’t have to have a fairy princess or magic etc.”

Asked if he feels concerned about sharing a relatively positive story in an era when prominent figures such as Senator Lynn Beyak have tried to downplay the horrors of residential school, Ben said he doesn’t feel bad about telling a story with a happy ending to children, no.

“When I heard the story, it gave me a chest tingle,” he said, “like all the best ones I have heard that have become my songs.”

Ben met Leo before he died and accompanied him on guitar on stage one night while Leo let loose on fiddle.

I won’t spoil the story here.  You can listen to Ben’s song below if you want to hear it.

I will tell you that Day’s great grandson was born shortly after publication, so now he will get to read about the great grandfather he never met.