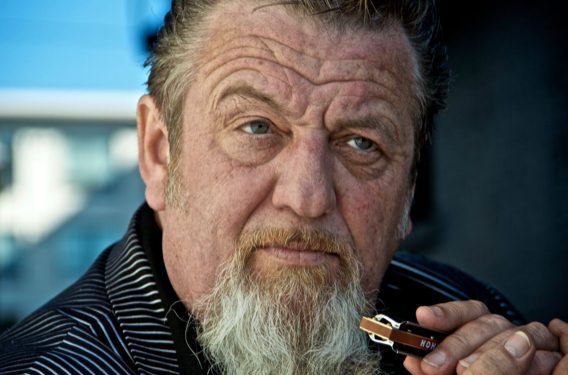 “I speak the blues like it’s the truth, and it is”, he said. “I do feel like I’m a servant of the people. A missionary if you will. Music can heal people if they pay attention to the messages in these songs.”

Harpdog delivers those messages using the vintage sound, whether it be with his lowdown classic blues band the Travelin’ Blues Show or with his new Uptown Blues Band.

Last Wednesday, Harpdog Brown celebrated a landmark occasion in Canadian history by releasing the new video for the track “Reefer Lovin’ Woman” from his forthcoming album, due spring 2019. Timing could not be more perfect for Harpdog, as Oct. 17 was the day that marijuana became legal for Canadian adults.

The song does not invite people to ingest pot, nor does it advocate that they do.  It is simply a song about a guy who falls in love with a woman who partakes. It can be considered a social commentary as well, with the final line, “that’s all right with me.”

For many, cannabis offers relief beyond the health benefits claimed by advocates of cannabis culture.

“I wanted to write a fun song about one man’s acceptance of the fact that the one he fell in love with is an advocate of cannabis culture..,” Harpdog said.

“I believe it’s long overdue. Deeming marijuana usage a criminal activity is insane in my opinion. I believe the information that supports the health benefits of cannabis over pharmaceuticals. I also believe that creating legal distribution channels would benefit our country and communities through the taxes gained.  Eliminating the need of a black market is I think a good thing. Much like alcohol in the prohibition days, the people have spoken. Marijuana is already accepted in our culture. It’s time to take it out of the dark.”

Harpdog Brown is a gifted vocalist and an imaginative harmonica player who has earned a solid reputation as a real-deal purveyor of classic electric blues reminiscent of the old Chess Records and Sun Records of the late 40’s and early 50’s.

He has won three consecutive Maple Blues Awards for Harmonica Player of the Year (2014/2015/2016), along with the Fraser Valley Music Award. He has three consecutive Western Canadian Music Award nominations and a Juno nomination, and he is the only Canadian to win the coveted Muddy Award. In 2016, he was nominated for three Maple Blues Awards (Harmonica Player, Male Vocalist and Album of the Year) for his latest release, Travelin’ With The Blues.

These days he’s been touring more and more as Harpdog Brown & the Uptown Blues Band – an ensemble with a vintage New Orleans Blues sound featuring slide trombone, keyboards, bass and drums and often a sax and clarinet.