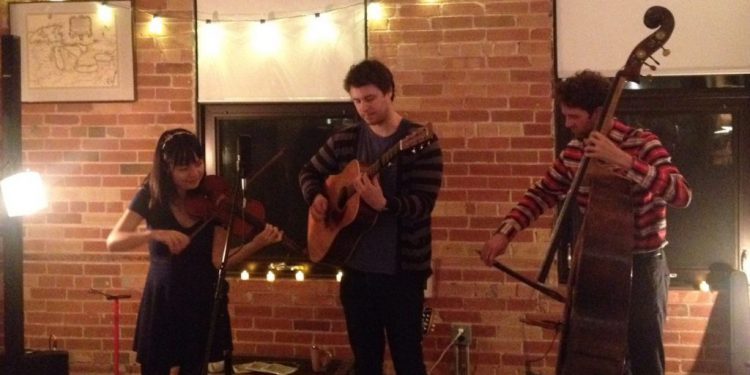 The Bombadils, a Halifax-based folk duo, are ramping up their music career following a short hiatus to spend time with their new baby.

Kicking off their activities this fall was a short Ontario tour, the highlight of which was a performance at the illustrious Koerner Hall in Toronto. But it also included an intimate concert at my condominium, which we cleverly called a “condo-cert”.

We filled all my available chairs, and my couch, with friends and family and had a close-up experience with The Bombadils’ music, which also included meeting Baby Bombadil.

Sarah Frank and Luke Fraser are remarkable musicians, drawing material and inspiration from traditional folk songs, rearranging them through their own compositional filter, and adding a whole lot of texture. You can hear influences from Appalachian, French Canadian, Irish and Maritime melodies drifting through their arrangements like a feather in the wind. Sarah Frank plays a fluid and fast fiddle and adds resonant vocals, and Luke Fraser switches between strong guitar and mandolin chops and solos. During this tour, they were joined by Evan Stewart, from Montreal, on upright bass.

Drawing ideas from places they’ve lived, the landscape of Canada weaves through their original tunes. “Squirrels Rule the Day, Racoons Rule the Night” is an instrumental piece based on living in Toronto. Paying homage to Sarah’s prairie childhood, “Hour of the Blue Snow” is about the way the light falls on snowy fields during dusk.

Keep both ears out for The Bombadils. They’ve got showcases coming up this fall at Folk Alliance International and Nova Scotia Music Week. More songwriting and co-writing for a new album are also part of their plans.

It’s easy to become a fast fan of this duo. I’m sold.