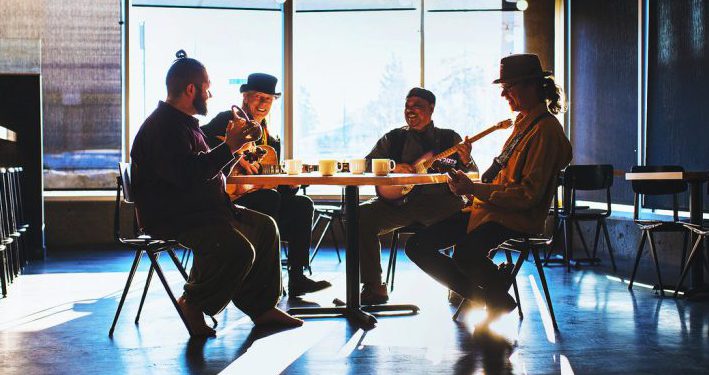 I think it’s fair to say that that’s exactly what Tri-Continental did around 2010 when, after four albums and a Juno victory for their self-titled debut, the members each quietly returned to their formidable solo careers.

But well over a decade after their last recording, more has finally arrived in the form of Dust Dance, an album that picks up where 2004’s Drifting left off, seemingly without missing a beat.

The trio of Bill Bourne, Lester Quitzau and Madagascar Slim has always miraculously managed to sound even greater than the sum of its parts, despite the fact that its parts are among Canada’s leading roots artists; Bill and Slim are both Juno winners in their own right, and Lester, a Juno nominee, is widely regarded as a top-tier blues-roots act.

There’s just something about the blend of Bill’s weathered folk sound, Slim’s Malagasy blues and Lester’s soulful roots that goes together like, say, water biscuits, brie and raspberry compote – or some other sophisticated flavor combo – and it sounds as fresh today as it did when they debuted 18 years ago.

Dust Dance opens with “Look Up,” a gentle number with a spiritual vibe, which is marked by easygoing harmonies and features Slim’s guitar at the forefront.

“Dust” starts off as a two-minute jagged electric guitar-driven instrumental that morphs into a Malagasy blues number featuring vocals distorted to the point of sounding like mere vocalizations.

That is, until the final lines.

“Listen you,” a voice speaks over the final bars. “Enjoy your time.   You really don’t have very long.  You were born just a moment ago.  And in another moment, you’ll be gone.”

“Stackerlee” is a rocker, featuring Bill on lead vocals, which sounds as if it was inspired by “Stagger Lee” – given the nod to its “Please don’t take me life” lines.  But this ain’t no cover.

And “Dancing in Old Crow,” the album’s closer, is an out and out upbeat, vintage-sounding country song about music and good times in the Yukon.

For all of the diverse influences that one can point to in the music, though, the thing that makes Tri-Continental so ceaselessly compelling is just how damn cohesive the band sounds no matter how many musical genres and influences it’s pulling into its brew.

That and the originality that runs throughout their records.

There’s no “reunion jinx” here; this is as good a record as Tri-Continental has ever made.