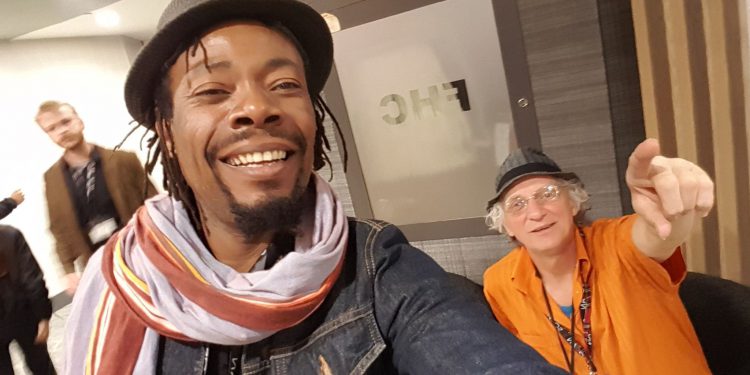 New Tradition’s extraordinary guitarist Adam Solomon takes in the vibes at the conference while a bystander photo-bombs his smiling selfie.

Even as we tried to get as much music into our ears as possible at the Folk Music Ontario conference last weekend, there was always time for close encounters in corridors, beside stages, and in the shade of a cold pint. Amongst the folk folks, the sociability at these gatherings is even more important than the socialism, so the rules of decorum are: open up for the camera, and hug anybody who will let you. Fortunately there were far more posers than poseurs so we were able to capture a few warm memories in the lens. Abigail Lapell, a worthy CFMA winner last year, demanded a motivation before her photo op. How about a retrospective FMO tribute concert for her work in say, twenty years? Big smile! When I was processing this pic of CFMA Emerging Artist nominee Annie Sumi and recent tour-mate, Tannis Slimmon, I tried to boost the photo brightness, but the computer said it was already at maximum brightness. Gathering Sparks’co-pilot and sing-along-monger Eve Goldberg was proud to pose alongside an appreciation of her long history in the folk community at the Borealis reception. It is always beneficial to listen in when the experts are conversing about music, because the knowledge can serve you well for years to come. The takeaway for Brian Blain here was never get David Woodhead and Graham Lindsay talking about mandolins. Artist, advocate and promoter Jean Paul De Roover provides his own emoji for his feelings about the shows and conference. A sampling of the hearties partying at the opening reception, and making good on the complimentary wine tickets, included Harbourfront’s Lorraine Hopkins, and perennial folk aiders and abetters Dougal Bichan, Alex Sinclair and Ian Davies. The legendary Magoo was also popping up everywhere, and worked well as a 3D standee beside his own testimonial. Melanie Brulée, Cassidy Houston, a woman whose name I didn’t get, and Amanda Rheaume gathered in the dusky purple as the sun went down over Pearson International and the curtain went up on the 32nd edition of Folk Music Ontario. Songwriter-singers, including Melanie Peterson, Civil Wray and Matt Gerber were by far the largest contingent and top of the food chain at FMO. Estelle Klein Award winner this year was Bill Garrett who now joins the company of his old compadre, and fellow guitar-slinger Paul Mills, who won the same award in 2011. Bassist of choice for many, Toronto’s Rachel Melas was there to perform with Amélie et les Singes Bleu. Rae Spoon was at the conference celebrating their new disc, bodiesofwater and showcasing artists on their Coax Records label, including respectfulchild who shares their bill tonight (Oct. 7) at Burdock in Toronto. Sina Bathaie opened the evening on Thursday with a showcase of his ethereal Iranian santur music. Kimberley Sinclair in social repose with Corby and George Crotty of Four String Nomads.who was there as a volunteer.

Correction:  A previous version of this story incorrectly stated that Rae Spoon was at the conference in part to mentor respectfulchild.  In fact, Rae was the mentor for Chloe Lukia Pilar.